Through Their Own Eyes 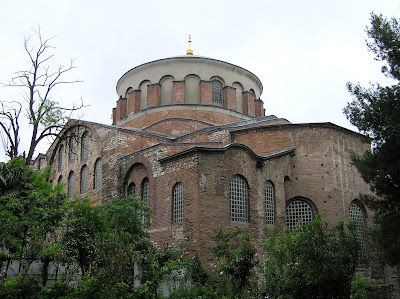 I have just finished reading Through Their Own Eyes: Liturgy as the Byzantines Saw It by Robert F. Taft, S.J. I commend this book, which should have particular appeal to Orthodox readers and inquirers, as well as those interested in all things Byzantine. Taft, a Jesuit, is a leading scholar on Byzantine Liturgy. A stint in Baghdad during the middle 1950s started him on his life-long study. This latest work is taken from his 2005 lectures at the Patriarch Athenagoras Orthodox Institute; deftly combining the best of both worlds--a scholarly work with rich, expansive footnotes, yet written in a lively and engaging style.
Like a good historian, Taft relies on the commentary of the Byzantines themselves, as he says, the "man-in-the-street's view of the Byzantines' participation in the worship of their church." Taft finds that Constantinopolitan worship could be noisy, boisterous, even rowdy affairs. Evidently, St. John Chrysostom's laments were not isolated occurrences. And yet, the very popularity of the services fed this behavior. One is also struck by the all-encompassing nature of Byzantine worship. The cycle of fasts and feasts defined life for the East Romans, from the Emperor down to the shopkeeper. The enthusiasm for the Liturgy was palpable. Homilies were wildly popular. The populace packed churches, even though services could seem interminable. Communion itself could take up to 3 hours.
I appreciate Taft's commentary on the Eucharist:
"Holy Communion is a gift received, not something anyone-not even the presider-just 'takes'....for eucharistic communion is not the sacrament of one's private communion with the Risen Lord. It is the sacrament of our communion with one another in the One Body of Christ, a body at once ecclesial and eucharistic."
He sees marked contrast with contemporary worship norms. The Byzantines "participated in the worship interiorly, by contemplating the unfolding of the mysteries," an approach "foreign to western traditions today." Taft contrasts their adherence to taxis or order, where "earthly institutions, both ecclesiastical and temporal , were considered to mirror the order of the universe, the cosmic array created by God" with "people nowadays [who] do not see themselves as finding their place in a scheme of things larger and-yes-more important than themselves. On the contrary, they see the larger reality in terms of how they can exploit it for their own self-fulfillment."

Some of his conclusions are worth pondering:

In other words, the Byzantine Orthodox Christians base the realism of their liturgy on faith in the reality of the Risen Christ. Because the human Christ is humanity glorified, he is present through his Spirit to every place and age not only as Savior, but as saving; not only as Lord, but as priest and sacrifice and victim. This is because nothing in his being or action is ever past except the historical mode of its manifestation. Hence Jesus is not extraneous to the heavenly-earthly liturgy of the Church, but its first protagonist....But in the Byzantine Orthodox tradition , the basis for liturgical anamnesis is not psychological recall, but theophany, an active, faith encounter now with the present saving activity of Christ. For what Christ was and did, he still is and does; it is he who preaches his Word, he who calls us to himself, he who binds the wounds of our sin and washes us in the waters of salvation , he who feeds us with his own life, he who is the pillar of fire leading us across the horizon of our own salvation history, lighting our sin-darkened path....In this theology, church ritual constitutes not only a representation, but a re-presentation--a rendering present again--of the earthly saving work of Christ.

Taft concludes that for those of us today who are in Byzance apres Byzance, "there is no end but only what comes next."
Posted by Terry (John) at 2:46 PM

Thanks for the review. In my experience, Taft seems to do very good work in all his writings. And, I look forward to getting my hands on this book too!

For what Christ was and did, he still is and does; it is he who preaches his Word, he who calls us to himself, he who binds the wounds of our sin and washes us in the waters of salvation , he who feeds us with his own life, he who is the pillar of fire leading us across the horizon of our own salvation history, lighting our sin-darkened path.

Wow. This is what I strive to remind myself, to see, to recognize at each liturgy - that what we sing at the end of the Cherubimic Hymn ("that we may receive the King of All, Who comes invisibly, upborne by the angelic host") is not simply some expression of hope in the eschaton to come, but is an expression of the reality of that moment - Christ IS in our midst; He is and ever shall be.

Thanks for the interesting post. Love the picture, too!

Hilarius, that quote just jumped out at me, as well. The picture is of the Haghia Eirene, which actually predates the Haghia Sophia.

Continuing the theme, Thank You from me too.

Pardon any ignorance, but where/what is the church pictured?

Ian, the picture is of the Haghia Eireneh, one of the most ancient churches in Istanbul (I know, I know--I am supposed to say Constantinople ;^). The church actually predates--and is something of a model for--the Haghia Sophia. It is located around the corner from the Haghia Sophia, now within the first wall of the Topkapi Palace compound. Interestingly, the Turks used the church to store munitions, and never bastardized it into a mosque. (Though they did put that goofy-looking golden crescent thing on the top of the dome.) The building is used mainly for concerts and that sort of thing. In 2004, I found it unlocked and looked around a bit inside.