Twenty Minutes at the Kimbell

I had the great pleasure of traveling to Fort Worth recently, visiting relatives there.  The state of Texas has three cities to commend it--Austin and San Antonio being the other two.  Both of these latter cities are falling victim to their own success, it seems.  Fort Worth, however, is just about right.  Unlike Dallas, this is a city of real neighborhoods.  And the city fathers have put some real thought into infrastructure--it being surprisingly easy to zip between the residential areas, downtown, the medical district and the arts district.  In terms of sheer livability, Fort Worth is hard to beat.

I visited my aunt in rehab and then started home, a drive taking the better part of three hours. On a whim, I decided to stop off at the Kimbell Museum of Art, one of the city's treasures.   I was able to park almost at the front door, and the gallery is free of charge.  I spent twenty minutes or so, revisiting some of my favorite works, a few of which are posted here.


I always enjoy ending-up in front of a matched pair of paintings--The Cardsharps by Caravaggio and The Cheat with the Ace of Clubs by de la Tour.  Both present a similar theme:  the easy fleecing of these rosy-cheeked sons of privilege.  De la Tour's is especially droll, as his cheat--by showing his hand--makes the viewer an accomplice in relieving the youth of his gold doubloons on the table.
Posted by Terry (John) at 8:35 AM 4 comments:

On Kicking a Ball 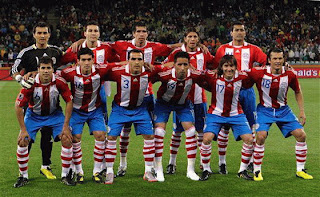 I have never been much interested in competitive sports.  I take pride in the fact that I rarely know which teams are playing in the Superbowl, much less any of the other bowls.  I am even less interested in baseball and basketball, not having the slightest clue about "March Madness."  I consider golf to be a colossal waste of time, almost sinfully so.  I can watch 10 minutes of the Tour de France, but only for the scenery.

I do take a passing interest in soccer, however.  I wish it had been around when I was growing up.  Who knows, I might have been halfway decent at a sport which did not require me to throw, catch, hit or dribble a ball.  And back when I was traveling overseas more regularly, I confess to getting caught up a bit in the enthusiasm of it all.  With soccer, you can do interesting things--like rooting for Paraguay.  How often do you get a chance to do that?

Nicholas Farrell, an expatriate Brit living with his Italian wife in her homeland, makes a few observations on the sport in The Holy Roman Church of Football.  He notes that, generally speaking, the Catholic countries are far better at the sport than Protestants who invented the game.  He has a little fun looking for a correlation between the Protestant Work Ethic and poor soccer skills.

Why are Catholics so good at kicking around soccer balls but so bad at running their countries?  Is it because they are Catholics?

Germany's refusal to sholder the entire debt burden of the eurozone's Catholic countries, plus that of Orthodox (semi-Catholic) Greece meant that its defeat was greeted with euphoric applause across the continent.

Whereas Karl Marx regarded economics as society’s driving force, Max Weber saw religion as more important. He argued in 1905’s The Protestant Ethic and the Spirit of Capitalism that there was a causal connection between Protestantism, especially Calvinism, and capitalism’s rise and that this explained why the Industrial Revolution took place in the Protestant, not Catholic, countries of Europe.

Protestantism possessed what Weber called “the spirit of capitalism”; Catholicism did not. Weber said the Catholic Church was hostile toward the pursuit of wealth while the Protestants emphasized hard work and economic success to achieve salvation.

Weber said that Protestants, unlike Catholics...had become detached from magic.  The fruit of their disenchantment was capitalism.  Weber was definitely onto something.

The huge success of Catholic countries in soccer cannot be due entirely to the sign of the cross they make each time they run on to the pitch and their belief in God, who--being a Catholic--intervenes personally each time they play....Maybe it is because Catholics prefer sport to work and that is where they direct their energy and passion.  For as Weber wrote...To Catholics work is an obstacle, not a means, to salvation.

I have traveled in any number of places where the so-called Protestant Ethic never took hold(mainly due to lack of Protestants.)  Some of these places can only be described as down-trodden.  I do not want to romanticize these locales, and it would both arrogant and narcissistic to complain too much about the very ethic which, when you get right down to it, made it possible for me to walk those particular streets.  Observing the pace of life and appreciation of the small things, however, sometimes left me envious. Winning can be just another name for losing.  And visa versa.

"Loathsome" was a particularly favored adjective used by the late, great Milton Burton.  In his East Texas drawl, no one could make better use of the word than he.  So naturally, he came to mind when I read this article--The Loathsome Romney Candidacy:  How Did We Get Here? (and a h/t  to Rd. John for linking this.)

Here's an excerpt that sticks with me:


Most decisive is what I’ve been calling the theological fusion of social and economic conservatism. Too many evangelical Christians seem incapable of even questioning Mammon. Now they enthusiastically welcome the money changers into the temple. Like the Calvinists of old, they glorify market outcomes as a sign of divine favor. And the cliche “class warfare” has served as a handy tool to shut down any deviation from this new orthodoxy.


Yep.  Loathsome is the word.