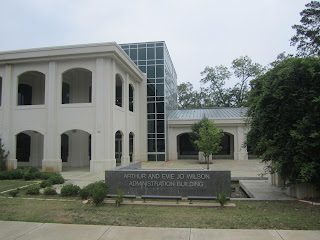 This headline in today's Tyler paper confirmed what everyone knew was coming.  Little Lon Morris College in Jacksonville, Texas--the second-oldest college in Texas (1873)--is no more.  Already in bankruptcy, the federal funding is gone and the fall semester cancelled.

I taught a history class there last fall and spring.  A good friend from church got me on there.  In fact, we had something of an Orthodox presence on campus.  All together, there were five of us.  Back in the fall, the checks--if you could call them that for adjuncts--started coming slower and slower.  By mid March, they stopped altogether.  Before graduation, control had been turned over to a consulting group, who terminated all teachers shortly after classes ended. 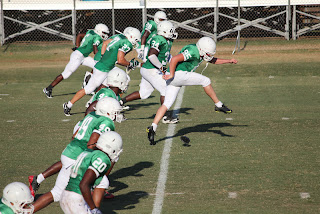 It didn't have to be that way.  Lon Morris College, heavily and lovingly endowed by Texas Methodists, was a going concern for many decades.  It did one thing really well, and that was drama:  Sandy Duncan, Tommy Tune, Margo Martindale--all Lon Morris alums.    For years, the Tyler Civic Theater has produced fluffy English drawing-room comedies.  Tyler audiences lap-up that sort of thing.  But if you wanted to see a musical, or a real play, you went to Jacksonville.  In our early marriage, my wife and I made a regular habit of it.

Now mind you, Jacksonville--a quirky place in a county noted for being backward, even by East Texas standards--is no-one's idea of a typical college town.  The community has some rough edges to it, and the East Texas you encounter south of the city is noticeably different in culture from the more enlightened (or so we claim) environs to the north, where residents instead look to Tyler.  An old saying here north of the county line is that "if you want to look good, then go to Jacksonville."  Once my wife and I drove to a down-country funeral.  On the way back, she needed to stop at the Walmart or Dollar store.  In her black dress and pearl necklace, at the Jacksonville Walmart, I told her that she looked like Princess Margaret.  Other than Lon Morris, Jacksonville boasts an expansive plastics-plant manufacturing district, an annual Tomato Fest, and the Tops-in-Texas Rodeo.  The locals, however, accepted the artsy-types hanging around town, every one immediately identifiable as a Lon Morris drama major.

Several years ago, a new regime came aboard, determined to shake things up with a new vision for Lon Morris.  Drama went by the wayside.    A new administrative center took shape, complete with grand lobby and spiral staircase, curved wood walls and expansive meetings rooms and office suites, with a fountain plaza out front.  By the time I came on board, the fountain was dry as a bone.

Of course, if Lon Morris was going to be really jazzed-up, it would need a football program.  And so, with the Board of Regents in tow, the president inaugurated the football age at Lon Morris College.  In short order, the campus gained a field house, practice fields and coaches.  For a couple years, enrollment soared to 1,000.  This was far more students than the college could house, so new dormitories were constructed.  In the interim, the overflow students were housed in an old motel on the edge of town.  Of course, the place was trashed, the neighborhood vandalized, and lawsuits popped-up against the college.  Academic standards and expectations plummeted.  By the time I arrived, enrollment was back down to about 450 or so.  The growth had not been natural.  The football, basketball, soccer and track jocks who couldn't get a real scholarship to a real sports program elsewhere found their way to Jacksonville.  I do not understand exactly how it all worked, but the college was going deeply in the hole for each and every student in the athletic program.  Once in class, I tried to muster a modicum of interest in their game that weekend, and asked who they were playing.  The best I could tell, it was a prep-school in Houston.

In short, the football program never really caught fire, and instead of filling the college's coffers, sucked it into debt too severe to overcome--10 million, 14 million, 16 million, and finally 18 million.  The president and Board of Regents pushed on, confident that God had a miracle in store for the college.  The loyalists spoke in terms of it being their mission to educate the underprivileged.  Those discontents who questioned the direction of things were accused of not having enough faith.  It was do-good Methodism at its best.  My friend tried to organize some of the instructors to push for a change in direction, back toward academic excellence.  Most, however, were content to ride it on down.  Luckily, my friend bailed out and nabbed a position at Baylor.

Some institution may buy the facility for a satellite campus.  Who knows.  There are a lot of lessons that can be learned from the death of little Lon Morris College.  I enjoyed my time there.  In my two classes of about 26 students each, I only had one student who knew a damn thing about American history--and he was from the Congo.  I doubt if I made any lasting impact on the others, but I had a helluva good time trying.
Posted by Terry (John) at 10:28 PM 1 comment:

Easing Back into Things


This has been a long dry spell for me.  I haven't tired of blogging, and it is not due to lack of subjects to discuss.  There's plenty I wish to pontificate about--the political circus, Syria, Orthodox concerns, foreign policy, cultural observations, etc.  The simple fact of the matter is that I haven't felt well in quite some time.  I suffered a freak pulmonary embolism last August, and as I now understand things, the fact that I am here writing these words after that is pretty remarkable.  But I never bounced back, and gradually came to the realization that I have been chronically fatigued for years.

When the sudden spike in blood pressure and chest pains started kicking-in, it was time to go see the doc.  As it turned out, I was in excellent health to be so sick. We were sure I suffered from the heart trouble that runs in my paternal side.  My heart, other than the too-frequent hardness thereof, was in fine shape.  So, I couldn't use that as an excuse.  My dad's grandmother was a wiry little dwarf of a woman who could still ride a horse at age 75.  She manipulated and controlled her daughters by feigning "heart-flutters" whenever she didn't get her way.  And it finally did take her on out--at age 84.  And so, I told my wife I was just having "heart-flutters," but she wasn't buying it.  My lungs checked out fine as well.  Ditto everything else they checked.  The last resort they knew to check was my sleep.  I've always been skeptical of these sleep studies, as it seems that if you take the test, they will diagnose you with sleep apnea.  As it turns out, I did have it--bad.  Basically, I stopped breathing 22 times an hour and my brain was in gear 31 times an hour during "sleep."  Whatever you want to call what was happening, it wasn't real sleep, and I awoke exhausted.

So now, I take double my former blood pressure medicine, I take a little acid-reflux pill that has made the chest pains go away, and I sleep with one of those masks hooked-up to a CPAC machine.  And with all this tinkering with my system, I am actually starting to feel good again.  I now wake up alert, which hasn't been the case for years.  The only thing left on my check-off list is to lose 25 lbs.  The doctor said I could eat potatoes or I could eat bread, but I couldn't eat both.  Damn.

The rest of the year will be a busy period for me.  I have a writing project that will have to cook-off by late October.  I am teaching an online class at the university here, as well as 3 history classes at the junior college (a Mon-Wed  5:35 class, a Monday night class and a Wednesday night class, so it is not as bad as it sounds.)  And then there's my day job.  But I do plan to ease back into regular blogging.  The easiest way for me to do so, I suppose, is to throw out a bit of travel writing.  My recent pecuniary difficulties have kept me stateside in recent years.  Even so, something always turns up, and I managed to squeeze-in a journey or two this summer:  a cousin's wedding in San Antonio, our annual summer reunion trek to the Deep South, a historical/genealogical research jaunt to NC and PA, and a business trip to San Angelo, the queen city of mid-south-central West Texas.  So, look for these reports to trickle-in in coming days.