Several years ago I took on the project of reading The Pillar and Ground of the the Truth by the noted Russian polymath Fr. Pavel Florensky (1882-1937). My mind doesn't naturally gravitate towards either science or philosophy, so much of the book was simply beyond me.  The sections I could comprehend, however, were simply astounding.  This magnum opus of his early writing is one of the most consequential books I have ever read.  Sometimes I wonder about the selections I would take with me if I were ever forced to leave my house with a single box of books.  My mental list always includes Florensky.

And so, I was excited to recently find Avril Pyman's Pavel Florensky, A Quiet Genius:  The Tragic and Extraordinary Life of Russia's Unknown da Vinci at Eighth Day Books.  "Genius" is a word that we sometimes toss around too lightly.  Such is not the case with Florensky.  Whether as theologian, scientist, philosopher, priest or writer, the designation is most deserved and was certainly acknowledged by his peers.  He was quiet and gentle, a sensitive soul who seemed to cherish friendships about all else.  Despite his intellectualism, Florensky apparently did not suffer from excessive pride and egotism, and seemed to be most at home as a parish priest.  Given his brilliance and talents, Bulgakov--upon hearing that he had married and sought out obscurity as a priest--likened Florensky to a holy fool.

I was pleasantly surprised to learn of his connection with Georgia and the Transcaucasus.  Although born in Azerbaijan, Florensky was more or less raised in Tbilisi and Batumi.  He was baptized in St. David's Church at Mtatsminda, one of my regular destinations in Tbilisi, and in fact the church there that I most closely identify with. Descriptions of his explorations in the countryside around Batumi brought back memories of my own experiences there.  And though his father was Russian, Pavel's mother was Armenian, from a well-established Tbilisi merchant clan.  Their roots, however, were in Nagorno-Karabach, a region in which I have some familiarity.

When the Revolution came, many marveled at Florensky's serenity.  To a remarkable degree, given the circumstances, he carried on much as before.

Florensky believe ardently that nihilism, which he understood as...the denial of the divinity of Christ and with Him of all creation, would eventually run its course and break up on its own inner emptiness so that, in his beloved mother country, 'hearts and will turn again, not idly and half-heartedly but with the avidity of deprivation, to the Russian idea, the idea of Russia, Holy Russia.'

Instead of anathematising the militant atheists, Florensky accepted what was happening in his native land as a judgement on a culture which had already become deracinated from the 'cult' on which it was founded.  Believing implicitly in the Church's abiding, ontological greatness and sanctity, he sought, at this moment of Her humiliation, to bear witness, with all the cultural range and lyrical feeling at his command, to the beauty of Her adornments, songs and rituals, to the imponderable profundity of Her Sacraments and to the homely radiance spread from the sanctuary of the holy places throughout the Russian lands.  Drawing on the well-spring of systematically cultivated memory, innate aesthetic sensibility and the energy of his religious praxis, Father Pavel applied an alert, formidably concentrated mind to the task of encapsulating in words the essence of what could be salvaged from the present shipwreck.  At the same time, he sought to puzzle out the infinitely complex past, present and future relationship between cult and culture, to diagnose the entropy of encroaching chaos and to proclaim the entropic power of Christ.

In time, the noose tightened around him.  Florensky was imprisoned by the Soviets from 1933 until his death in 1937.  He took his lot in stride, and his many letters home did not admit to the desperation of his situation.  Pavel took solace in being allowed to work in a laboratory during his early imprisonment.  His complacency was shattered, however, in March 1934, when he learned that the Soviets had entered his family's apartment and confiscated 2,684 books.  They were to return in three days for the remaining volumes.  Florensky's life ended in that terrible year, 1937, in a Soviet prison outside Leningrad, with two gunshots to his head.  His body was unceremoniously dumped in a mass grave with his fellow victims.  Pymin concludes that "if this was martyrdom, it was the very twentieth century, existential martyrdom of a sentient, living human being, ground down to silence and consigned to an anonymous grave."  Florensky was a great man, but more importantly than that, he was a good man, and he deserves to be better known today. 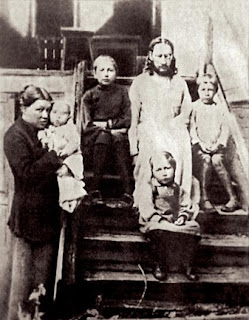 My favorite quotation from the book is the following, where Pavel Florensky shows himself to be a true son of the Caucasus:

From this comes my-I'll say it in plain words-my contempt and hostility towards all the contemporary world...Evlach...where I was born, is situated in the Transcaucasian steppe, bounded to North and South by snowy mountain ranges.  The Caucasian range and the Armenian mountains are like diamonds, their sparkling sharpness quite beyond the imagination of those who have no experience of mountains, the ultimate perfection of their distant outlines thrusting up into the eternal, unquestionable, incorruptible, eternal in a way those who have no experience of mountains simply cannot conceive, into the depths and velvety infinity of the azure sky.  And amidst these mountains lie the torrid open spaces, all woven from the metallic, resonant trills of cycadas and grasshoppers, from an abundance of growing things, fish, game, beasts of the hoof, predators, poisonous insects, snakes and sweet scents, famous for their karabach horses, the best in the Caucasus, and their dashing brigands, the most desperate in all Transcaucasia.  In the free space of my soul there are no laws.  I do not want law and order and set no value on it, for I know myself to be a brigand to the core of my being, who should not be sitting in a study but galloping through the stormy night, galloping with the whirlwind, without purpose...I want to take possession of the Azure, to embody it in myself.  Yet never to forget that the Azure is ABOVE me, the Kingdom of Eternal Peace, a calm, serene Kingdom that pours itself into my soul.  And, submissive only to the Azure, I still need symbols of my limits.  It is the snow-peaks that frame the steppe which make me aware of my freedom and of my limits.  The snowy peaks thrusting up into the Azure situate it closer to me--and further away...I will not come to terms, cannot come to terms with anyone who shuts off my view of the peaks with wooden fences or obscures them with smoke.  Authority - fatherland - kingdom - priesthood - powers spiritual - these are the snowy peaks of my conscious being...
For authorities issuing forth from the belly of Leviathan I have no recognition other than the toe of my boot.  But it is precisely the immanent that is springing up now from every crook and cranny.  The Church Authority, the sacraments, the meaning of dogma, God Himself - have all become immanent, are all losing every vestige of real being outside ourselves, are becoming projections of ourselves.  Everyone is busy undermining the heights, misting over the earthly firmament, piercing the Azure. 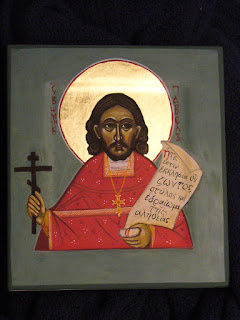 I don’t do New Year’s Resolutions, but if I were to do one, I think I would resolve to avoid all 2016 political predictions.  To begin with, the rules no longer seem to apply.  Anything can happen and probably will.  I no longer say that Trump or Cruz could never be nominated.  Either of them very well could and may.   Fortunately, being nominated does not equal being elected.  That would have to happen in an America I no longer recognize.  I still think a Trump nomination spells doom for the GOP, if not an outright party split.  And if they do not nominate him, Trump may very well go the third party route.  The Republicans have no one else to blame but themselves for this predicament.  This is a toxic brew they’ve been nurturing, and now Trump has harnessed it and made it his own.

And secondly, all of my predictions for what happens on the first Tuesday in November are simply too grim to contemplate.  It is going to be bad enough when it happens, so why acknowledge it beforehand?  In the past, I have always voted for the candidate I deemed least likely to do something incredibly stupid in the Middle East.  With Barak Obama, that has turned out to be a “less than/more than” situation, rather than an either/or situation.  And his “less than” is a lot “more than” I would have liked.  But even that criteria doesn’t hold this time around.  Today I listened to both Ben Carson and Chris Christie in separate interviews.  Each refused to condemn the 40 beheadings in Saudi Arabia.  The former stated that we should be more supportive of our allies, the Saudis, and implied that our playing footsie with the Iranians justified this action.   The latter, when pressed about the flimsiness of the charges against the 40 unfortunate captives, stated that he had no sympathy for Iranians.  Nice.  So that is what passes for conventional wisdom in the GOP field, I suppose.  But what is my alternative?  Hillary Clinton???  The rest are just chicken hawks.  She’s the real thing.  Anyone who believes she is not the most hawkish candidate in the field simply hasn’t been paying attention.  So, if I followed my former logic, I would be supporting either Trump or Cruz, who are the least bombastic when it comes to military action in the Middle East.  That is how crazy things are this year.  I’m so confused.

In lieu of predictions, I will venture just a few caveats and leave it there.

1.  Democrats discount the level of broad discontent with the Establishment Party at their own peril.  Likewise, they would be wise to address the genuine lack of enthusiasm for their putative nominee, Hillary Clinton.

2.  Republicans should not confuse the GOP base that drives their nominating process with the actual electorate that chooses the President in November.  They are two different things.

3.  Whoever wins, the impasse continues and we will remain largely ungovernable.  And all things considered, maybe that is for the best.
Posted by Terry (John) at 7:41 PM 4 comments: