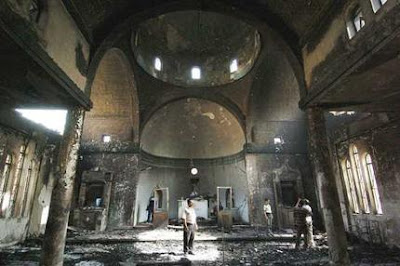 While driving into work this morning, I was listening to a news report from Iraq. I heard a clip of our Vice Decider giving a pep talk to the troops. Cheney told them that what they were doing was "making the world a safer place for their children and grandchildren." My heart goes out to our troops, doing a Herculean work, in an impossible situation. But such worn-out platitudes are now meaningless. No one is listening to either the VP or the Commander Guy. Everyone is looking for the exit.

Later in the day, I read this, and this. And I had to wonder what the children and grandchildren of these people will think of Mr. Cheney's claim? For this is a consequence of our mad gamble--the destruction of a society, in this case a Christian society. In 1979, Iraqi Christians numbered 1,684,000. They were a minority certainly, but a respected and unmolested group, more or less free to live out their faith. Then in 1991 came the 1st Gulf War, 12 years of sanctions, and now the current conflict. At the time of our invasion, their numbers were down to 750,000 or so. Today they are perhaps half that. And now the latest pogrom.

The general lawlessness of the country outside of the Green Zone and Kurdistan has swept away what ever protection Iraqi Christians ever had. Al-Qaeda militias now have free reign to cleanse neighborhoods of Christians. By slipping a note under a door, the terrorists give Christian families 24 hours to either convert to Islam, leave with no luggage, or be killed. And so they are fleeing.

The head of the state agency governing churches noted that "the Christians are soft targets. They don't react with violence." Exactly so. They don't react with violence. I wonder why this is so? They are no different ethnically from their Sunni and Shiite neighbors. They are all Arabs. Could it be that the difference lies in their respective faith systems? This is hardly Christian triumphalism to make this claim; merely realism.

...the inner life of Westerners [or eastern Christian] is profoundly different from that of Muslims, as different as the concepts of a God of Love who exalts the humble, and Allah who loves the strong and rewards the victorious.

I have no particular insight into what will emerge from the wreckage of Iraq (other than an independent Kurdistan). What is clear, however, is that baring a miracle, the 2,000-year old Christian presence in Mesopotamia is drawing to a close. Future historians will duly note our role in their disappearance. To learn more of the plight of Iraqi Christians, bookmark this site.

And the on-going conflict may very well impact American Christians, as well. I know that these higher gas prices may force some local churches in my area to curtail one of their winter Colorado ski trips for their youth. Lord have mercy on us.
Posted by Terry (John) at 2:19 PM

We Western "Christians" have been betraying our elder, Eastern brothers in Christ for so long now that it has become a tradition. May we shed tears of repentance . . . .

Excellent post, John. We have no clue about how the Middle East's politics and culture and religions have hammered out a tenuous coexistence over the centuries, all kept in check by the threat of violence which seems to be the only thing that the culture understands and responds to evidenced by the current state of affairs. sigh...

I agree, Iraq is a total cluster. When Saddam was alive and in power there was stability, but then there always is when you have a psychotic dictator in power. You keep in line or you disappear. Freedom brings chaos.

I was against us going into Iraq, but AQ decided to make Iraq its battle front, and for that reason I am all for winning this war. I think Bush got some bad intel and thought this would just have been a cake walk. My question is this, who stands to gain if we lose?

I don't trust the media to tell us what is really going on. As a friend of mine who was there said "How can you trust a media who doesn't mind telling you how many of us got killed today, but won't tell you how many of the enemies were killed."

I have to agree with him. The people in the media are in lock step for defeat and have done nothing but demoralize this country and our fighting men and women.

The second in command of AQ has come out and said that Iraq is the battle front, and all the while the media was telling us AQ wasn't in Iraq.