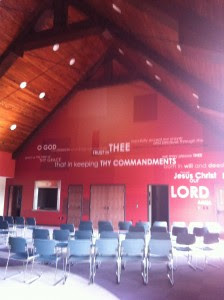 I always appreciate droll absurdities and irony. That is why I particularly enjoy the Religion section each week in our Saturday newspaper.

This week’s offering included a story on the big Episcopalian church downtown. No doubt many wonderful people attend there. Maybe I am too cynical, but the church always struck me as the place Methodists moved up to once the money was made and the lifestyle on auto-pilot.

The article notes that the church has grown 10% during the last two years, with 1,500 members, “800 of which are active and 400 who are regular attendees.” I don’t understand that statement at all, but I will let it pass. Of the 400, the assistant rector notes that 200 attend Sunday School every week.

One year ago, the church initiated an “Epiphany Envisioning Service.” (For the record, if my church ever made regular use of the word “envisioning,” I would know all is lost.) At that time, the church explained the
concept thusly:

Envisioning is a contemporary service that features modern Christian worship music, (lead by musicians playing guitar, violin and bongo drums), a shorter somewhat simpler liturgy, (currently one borrowed from the Church of Kenya), and a greater focus on the homily or the teaching.

Violins and bongo drums, you say?

Apparently, all this envisioning has been a roaring success, as noted in this week’s article.

This is not a service for the parishioners, it’s a service for their neighbors and coworkers…The Epiphany Eucharist is the church’s version of a contemporary service. The priests opt for a collar instead of robes and the music includes more modern songs, such as ‘Mighty to Save,’ ‘In Christ Alone,’ and ‘Christ is Risen.’ Still, attendees confess creeds every Sunday and take bread and real wine from a communal chalice…

Perhaps anticipating snarky reactions such as mine, the assistant rector was quick to note:

It’s important for us that the liturgy not be dumbed-down…We love the liturgy so much, we want to share it. It’s not a rock concert at all. It’s a service where folks who might be uncomfortable in the nave (the more traditional service) can be exposed to the liturgy. Ultimately the point of the Epiphany Eucharist service is to acclimate those who haven’t grown up in the tradition.

But here is where the assistant rector really goes off the rails, in my opinion. He compares the
Epiphany Envisioning Eucharist Service to a “bridge beer,” concluding there’s a good chance they’ll like something about it. This service is like a Shiner for someone who drinks Bud Light. This is how we introduce Bible Belt evangelicals to church history.

For those of you on the wrong side of the Red River, the word Shiner denotes the product of our cherished and independent Spoetzl Brewery in Shiner, Texas. I resent the defamation of an iconic symbol of Texas to make a point about some artsy-fartsy Episcopalian envisioning silliness. I say envision all you want, just leave Shiner Bock out of it.

The article continues to tell of the assistant rector’s project.

Most of the service’s attendees are younger…he tailors his sermons to fit that audience. But the people who attend the two types of services aren’t as different as one might think. "The things I
talk about also play well in the nave," he said. "For example, I could talk about cutting, but maybe there’s a 75-year-old grandmother whose granddaughter struggles with that. I think the 75-year-olds today are much different than they were 20 years ago, because of the Internet. It’s an exciting time to do ministry.”

How very, very relevant. Someone help me out here—is that regular pulpit fare these days?

The best thing about the article, however, is the attached picture (sadly not available)--much the same view as above, only with people. The assistant rector is up front, liturgizing, and a young 30-something in the back row of chairs attracted my attention. He is casual, legs-crossed, looking intently--down at the text message he is sending on his iPhone. Clearly, more bongo drums are called for.
Posted by Terry (John) at 8:09 PM 10 comments: 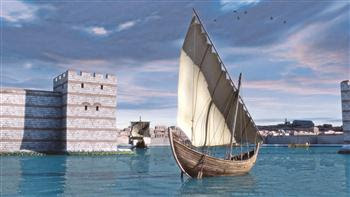 I am a sucker for this sort of thing. See here:
Posted by Terry (John) at 8:31 PM No comments: 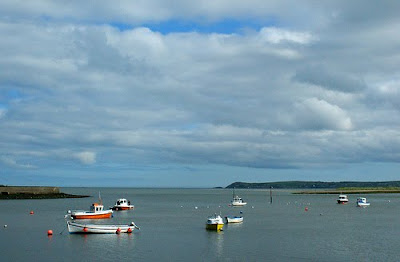 I'm stuck in the blogging doldrums these days. It is not that I do not have anything to say, but rather that I cannot seem to muster enough interest to expound on much of anything. And then, financial concerns and working 3 jobs tends to focus one's attention in directions other than blogging. That said, I have posted something here every month since November 2005, and I realize that January is fast slipping away. Skipping a month sets a bad precedent and evokes images of an undisciplined soul sliding further into sloth and lethargy. And so, I must post something it seems.

To post on the current political circus would be picking low-hanging fruit indeed, and Lord knows I am the last one to pile-on. Ahem. But if I were to do so, I would probably link to something like this, from a writer with whom I never agree, except on those rare occasions when he writes something sensible that agrees with my thinking.

I suppose I could post yet another laudatory commendation of my hero Daniel Larison's latest, or perhaps a

a clip or two by my other foreign policy mentor, Dr. Brzezinksi.

I could always link to an interesting article on Turkey, such as this or this (with dead-on conclusion: Here, the trouble with the AKP is not that it is too “Islamist.” The trouble is that the governing party, which has clashed with a powerful state establishment for years and found the solution in liberal reforms, is now enjoying the very power that it once found menacing. As Andrew Finkel put it well in the New York Times, with a reference to the Lord of The Rings, this is a “Frodo Baggins moment” for the AKP: “It knows it should throw the ring of power into the fire, but the ring feels increasingly comfortable on its finger.”)

I suppose I could pour scorn on the incoherent ramblings of unrepentant neocons--always fun.

And with Great Lent still almost a month off, it is too early for American Orthodox "Scandal Season."

And so, I think my first post of 2012 will be this: My friend John preaches for a church of Christ in rural Alabama. He is a good-natured sort, who does not take offense at the Protestant/evangelical/Restorationist straw-men I construct and demolish here. John sometimes posts his sermons online. I encourage you to check out this one: "A Gentle Religion." As an Orthodox Christian, I have to say that I agree with every word. I find it very well done, a thorough mining of Scripture as only a church of Christ preacher can do.

And on his subject, I would add the following, though I doubt the writings of an Orthodox bishop and saint would be much quoted from a church of Christ pulpit ;)

And when your enemy falls into your hands, do not consider how you can pay him back and let him feel the sharp edge of your tongue before sending him packing; consider rather how you can heal him and restore him to a better frame of mind. Continue to make every effort by
both word and deed until your gentleness has overcome his aggressiveness. Nothing has more power than gentleness. As someone has said, ‘A soft word will break bones.’ And what is harder than bone? Well then, even if someone is as hard and inflexible as that, he will be conquered if you treat him gently. There is another saying, ‘A soft answer turns away wrath.’ It is obvious therefore that whether your enemy continues to rage or whether he is reconciled depends much more on you than on him. For it rests with us, not with those who are angry, either to destroy their anger or to inflame it.
St. John Chrysostom