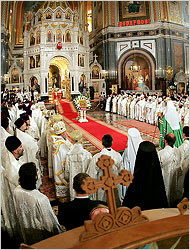 ...says Patricarch Alexy II of the Russian Orthodox Church of the ending of the schism with the Russian Orthodox Church Outside of Russia, here.
President Putin attended the ceremony, noting that the agreement was "'a nationwide event of an historic scale and of vast moral importance.'' Putin's role in this reconciliation is intriguing. A story, here, tells of Putin's 2003 visit with ROCOR leaders in New York City.
The atmosphere was tense, laced with nearly a century of mistrust and bitter feelings....The breakaway church had vowed never to return as long as the “godless regime” was in power.“I want to assure all of you,” Mr. Putin said at the meeting, “that this godless regime is no longer there....You are sitting with a believing president.”
Posted by Terry (John) at 11:56 AM

Happy Feast Day! A joyous day for all! Thanks be to God!

Indeed a joyous day for all.

Thanks and praise be to God!