Fellow foreign policy junkies will appreciate the discussion yesterday on Morning Joe.  A number of the usual suspects were in attendance--Richard Haas, Carl Bernstein, Dan Senor, David Ignatius, and my favorite, Zbigniew Brzezinski.  Some may fault him for his connection with the Carter years, or for laying the groundwork for our involvement in Afghanistan in the 1980s, or for supporting our bombing in Bosnia and Serbia in the 1990s.  But in the early winter of his life (he is 84), his vision and voice is crystal clear.

Syria was the subject that they had gathered to discuss.  Joe Scarborough, for once, was unusually quiet and let the guests do the talking.  Nearly every one of them struck some variation of  "We Have to DO Something!"  Dr. Brzezinski was the lone voice of dissent (and reason.)  He repeatedly inquiry was to the effect of "Do what, exactly?"  None of them gave a convincing answer to his question--not even David Ignatius, a noted disciple of Dr. Brzezinski.

Two themes caught my attention.  I found it interesting to see how very eager the rest of the pundits were to poke the post-Soviet bear with a sharp stick.  Also, seeing Carl Bernstein and Dan Senor, of all people, as two sides of the same neo-con coin was pretty enlightening.

Dr. Brzezinski speaks truth about Syria and the world.  He is masterful here (particularly in his exchange with the pompous Bernstein.)

"The world is as it is.  Just moralistic sounding off is not a solution to the Syrian problem."

Check it our here.

The Texas election--officially known as the Republican Primary--went down today.  A Democrat has not been elected to a statewide office since 1994, and 2012 doesn't look to buck that trend.  So, winning the Republican Primary is usually tantamount to winning the general election.  In time, demographics will overtake the GOP's hold--perhaps in 2018, but certainly by 2022.  But for now, the Republicans reign supreme.
It hasn't always been that way.  When I first moved to my little town in 1977, you actually could not vote Republican at all.  If you wanted to vote in the GOP Primary, you had to drive 5 miles north to the next little town.  Eventually, Republicans were allowed to vote here.  I remember the first time--the respective local precinct chairmen eyed each other warily, like two prize-fighters, across the room they had to share in the old City Hall.  At that time, I started easing into voting GOP, in reaction to my disillusionment with the Carter administration.    By the mid 1990s, the situation had completely reversed, and Democratic voters were as scarce as hen's teeth.  The Republican Party was never a good fit for me, however, and I have long since reversed course--now doing penance for my sins committed in the voting booth during the Bush Administration.
The county line runs through the south edge of our town, and we live on the wrong side of that boundary.  So, unless it is a city election, we have to drive 6 miles to a rural community south of here.  At different times, my wife, son and I all voted there today.  Political signs lined the street across from the Fellowship Hall of an old 1909 Methodist Church--the largest one for a GOP candidate setting out his 3-point platform:  God, Public Education and 2nd Amendment.  Voting here is always a lot of fun.  A new state statute requires random I.D. checks.  The lot fell to the lady in front of me, and the paperwork required to document their verification of her I.D. brought the voting to a complete halt, as the 3 poll worker-ladies tried to figure out what to do.  We are required to tell the first poll worker which ballot we want--Republican or Democratic.  When I requested the latter, she looked at me funny, and said something like "we haven't had many of those today."  And she was right.  At an hour before closing, I was only the 8th Democratic voter, the 5th and 7th being my wife and son.  When I got home, the three of us sat around and exchanged stories of our voting experiences.  The poll worker said much the same thing to my wife that she did to me.  But when my son asked for a Democratic ballot, she asked, "Are you sure?"  He then asked her if it was still legal to vote Democratic in this state.  Just for fun, we sat around together and watched a bit of the evening news.  The reporter interviewed a clean-cut young man who was voting for the first time.  He talked of the importance of what he was doing and how proud he was to "cast a vote for the Big Man upstairs."
Lord Help Us. 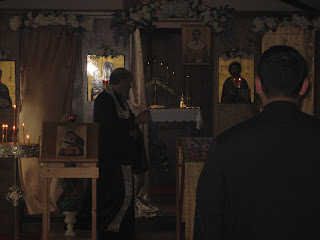 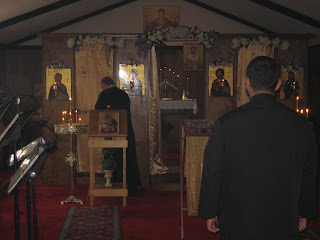 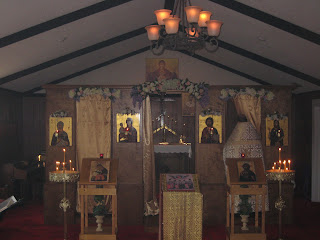 Since September 2006, our local Orthodox mission has met in an old 1926 schoolhouse.  We own land where we plan to build our own temple.  But right now, we seem to be stuck in design--trapped between an Orthodox aesthetic and what a bank will actually loan us to build it.  So for the foreseeable future, it looks as though we will stay in the old schoolhouse a while longer. 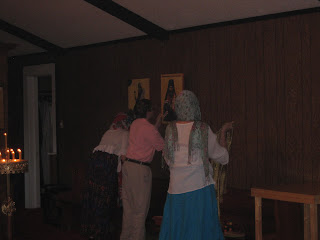 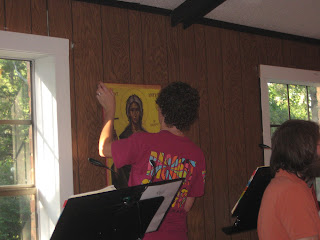 The first schoolhouse was built in 1878, and the adjacent cemetery began a few years later.  In 1939, the school closed--consolidated with a larger district--and the property deeded to the cemetery association.  From the very beginning, the schoolhouse was often used for church services, usually of the Baptist variety, but also of a Church of Christ in the1940s.  In the mid 1970s, an itinerant carpenter/Baptist preacher wanted his own church.  He convinced the cemetery association to allow him to make alterations to the structure.  We never actually went to church there, but attended the annual Memorial Day Services and dinner-on-the-ground, as my mother's people bury in the cemetery next door.  I remember coming home from college one year and seeing the alterations for the first time.  I went inside and remember just wanting to cry.  Gone were the high ceilings and tall narrow windows, as was the pot-bellied stove in the center of the room, and the school desks, and the old picture of George Washington.  What replaced it was a thorough-going bastardization--lowered ceilings, short metal windows, dark paneling and thick, red-shag carpeting throughout.  The carpenter/preacher made his own pulpit--the frame of an old pump-organ covered with left-over dark paneling an topped with more of the red shag carpeting (really.)  The church group installed clunky, heavy wooden pews, with red padded seats.  The crowning glory, however, was a velvet-screened picture of the Last Supper, as well as one of The Sacred Heart of Jesus (though I doubt any of the congregants knew they had hung a Catholic icon.)  He nailed a wooden cross to the wall above the pulpit, and a homemade cross with a clock in the center on the back wall.  And of course, the American flag was prominently displayed up front.  I did not know how to articulate my feelings at the time, other than the fact that I knew I loathed it. 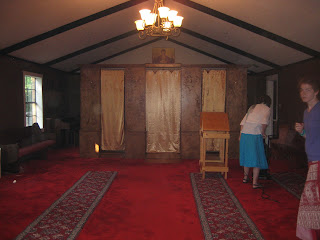 The church rocked along for a while, but fell victim to the inevitable splits and power plays, becoming increasing a make-it-up-as-you-go affair.  A cousin of mine rode herd over the downward spiral, just as her dad had done to a church group a generation earlier.  I was very close to this kinswoman, but realize that had she lived, she would never have allowed us to use the building--for an Orthodox Church, of all things!  But she died--suddenly--in the very room in which she had been born--which had been the same room in which her own father had been born and died.  Anyway, we took over the building much as the church left it, albeit a bit mustier. 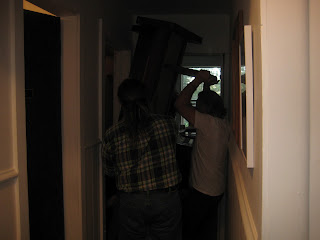 We have a good arrangement with the cemetery association.  We do not pay rent, but cover the utilities and insurance and make any necessary repairs.  But once a year, in late May, we have to give up the building to them for their annual meeting.  For many years, the routine was to have a business meeting, then some singing and a quasi-religious service, followed by dinner on the ground.  For many years, my great-great aunt would play the old out-of-tune piano and lead singing [I can still hear her warbling "Tell me the sto-ry of Jee-sus, mark on my heart every word, tell me the sto-ry most precious, Sweetest that ever was heard..."]  The singing and sermon have fallen by the wayside, as most of the old-timers who insisted on this are now gone.  Now, the program usually consists of some talk about the history of the community or its families.  But the 1970s alterations became the new tradition.  Even though the cemetery group no longer puts-on a sermonette with its business meeting, they still have to have their meeting on Sunday, with pews in place and an aisle down the middle. 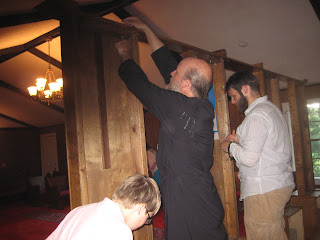 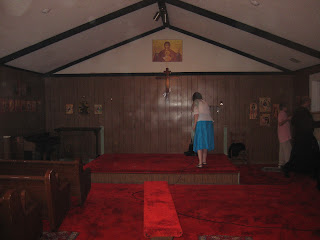 And so, once a year we have what we call "taking down the temple."  The altar and iconostasis come down.  The candlestands and incense go into hiding.  The saints that surround us go away for a while.  And in comes the paneled and red-tufted pulpit, the American flag, those godawful pews, and of course, the velvet Jesus.  I am anti-pew, not because I am in the OCA, but because every year I have to help inch them down two narrow hallways from the back room where we have them stacked on-end.  And then a few days later, we get to reverse the process.  Mind you, I am not complaining (much), for I realize some mission situations have to do this every time they meet. 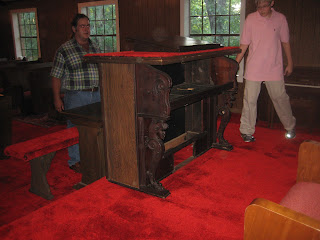 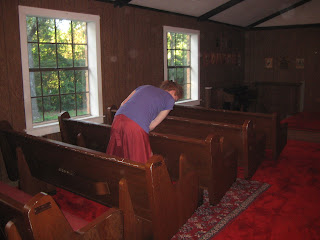 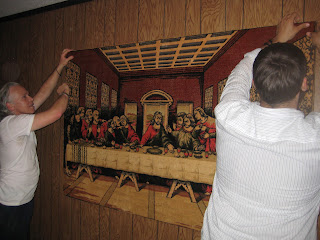 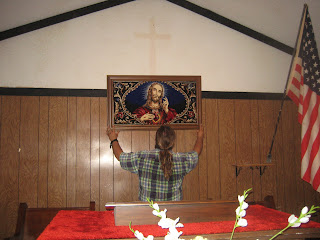 After six years of this, we've gotten pretty good at it.  With enough help, we can do it in slightly under an hour.  We usually have plenty of help, due in part to the iced-down beer I bring for afterwards.  I guess you can say that is our tradition.  I attend the cemetery meeting, first because I am their secretary-treasurer, but mainly to protect the mission's interests if something were to come up.  It is the strangest thing in the world to sit in the room that only the night before had been our nave.  Thankfully, I am not subjected to any preaching at these meetings.  There could be no greater contrasts between worship environments.   The starkness and paucity of this reconstituted Baptist chapel is really quite sad. 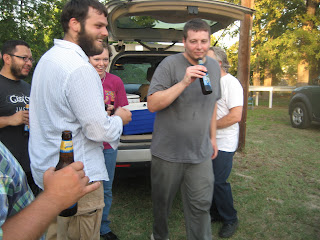 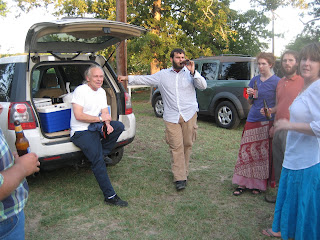 Finally, when strong religious impulses coexist with weak religious institutions, people become more likely to channel religious energy into partisan politics instead, and to freight partisan causes with more metaphysical significance than they can bear. The result, visible both in the “hope and change” fantasies of Obama’s 2008 campaign and the right-wing backlash it summoned up, is a politics that gives free rein to both utopian and apocalyptic delusions, and that encourages polarization without end.