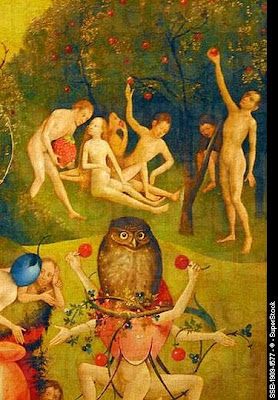 Alternative Right is a favorite online destination of mine. [Update: a couple of visitors here have raised valid objections to some material on the AR site, so...as in most everything online, use discretion.] I particularly enjoy the writings of Mark Hackard, an infrequent contributor there.
His latest, Pleasure-Dome Police State is a keeper. A few selections, after quoting Plato's We should expect tyranny from democracy, the most savage subjection from an excess of liberty:

Terror and tyranny are inevitable byproducts of democracy, the one legitimate form of rule permitted by Washington to the tribes of humanity. Our struggle for the rights of man must by necessity incur some casualties, but such bloodshed waters the tree of liberty. Tabulated (or not) as collateral damage, Pashtun villagers are ripped apart by Hellfire missiles launched by drones so that one day girls from that very community may go to an NGO-run school and learn about voting and contraception. Yet when a Pakastani who has taken U.S. citizenship attempts to blow up Times Square in revenge, no one in America’s political and media establishment seems the least bit curious as to his motives. The entire affair is written off as business as usual in the Open Society--after all, it could have taken place anywhere. This regime is the culmination of liberalism’s logic; it is what U.S. forces patrolling the Hindu Kush and all other corners of the earth defend. We fight them over there to invite them over here, for peace and unity in our world must first be enforced through universal war.
....And what is the secret of democracy, this gospel to liberate and empower all mankind? It is the political expression of our modern faith, self-worship. Just below the rationalistic assertion of rights and equality is the abyss of desire, the wish to ultimately recognize no authority higher than one’s own will made divine. Faith, ethnos and culture must be annihilated by egalitarianism and market forces, thereby giving rise to the New Man. From spiritual disorder springs social anarchy. In the contemporary West, a nation is no longer itself, but a mass of atoms, sovereign in their frenzied quest for profit and pleasure, mere demographic material for the plutocrats’ global Babylon.
....Herein we discover the bankruptcy of humanism: reason works as an eloquent prostitute for passions that would enslave us all. The Pleasure Dome is a police state.When the democratic principle is exalted beyond the suitable level of local institutions, it flattens all qualitative distinctions between individuals and peoples, leaving destruction, mediocrity and token tasteless amusements in its wake. As the modern West pursues the ideals of liberty and equality to their final outcomes, it draws ever nearer to a nightmarish despotism and dissolution. Immanent universal brotherhood can only be diagnosed as the fever-dream of a diseased imagination, which in its turn is seduced by a malicious deceiving spirit....Tyranny is not democracy’s tragic demise, but the logical consummation of its progress....Life in this fallen world is struggle--toward Transcendence and eternity. Accordingly, politics must be conducted in fidelity to the moral law, whose Author is supra-natural. All power derives from God, and to Him shall it be consecrated.
This is another interesting Hackard article.
If you are on board with Hackard, you might also appreciate this.
Posted by Terry (John) at 4:38 PM 10 comments:

I'm not picking on Presbterians, but this is hilarious. In the interest of fair play, if someone ever does one of these on Orthodox seminarians, I'll be the first in line to post. I promise.
Posted by Terry (John) at 4:04 PM 1 comment: