The Iraqi Parliament has finally passed a crucial election law, once they decided not to decide on the Kurdish question just yet. The new law is said to be "crucial for the nation to heal its deep-running political and religious fissures and also to shore up the fragile security gains that have been achieved in recent months."

But, there are a few troubling details:

The question of how to settle a fierce dispute over control of the ethnically mixed and oil-rich northern city of Kirkuk, however, was given to a committee for further study.

And an article in an earlier version of the law that provided a limited number of provincial council seats for Iraq’s Christians and other minorities was eliminated from the new bill, stirring outrage among the groups.

The new law eliminates an article that, in an earlier version, had provided 13 seats in six provinces for Iraqi Christians, Yazidis and other minorities — a move that Younadim Kanna, head of the Assyrian Democratic Movement and the only Christian member of Parliament said was “a very, very bad sign.

“We really were disappointed,” Mr. Kanna said, adding that he could “sense disaster” in the Parliament’s action.

“It seems they are confiscating the free will of the minorities and trying to impose their own puppets to represent” them, he said.

In a news conference held on Wednesday, Staffan de Mistura, the United Nations’ special representative to Iraq, called the passage of the election law “a good day for Iraq, a day for democracy,” but he added that the minority issue was a “dark cloud.”

Who knows what Iraq will become once our troops leave (though one can safely bet that it will not be the western-oriented liberal democracy fantasized by the American right). What is clear is that Iraq will be less safe and less secure for the Christian remnant holding out there.
Posted by Terry (John) at 6:23 PM 2 comments:

One of the most thoughtful news shows around is Fareed Zakaria's GPS on CNN. I usually catch it on the radio, on my way home from church. This Sunday I caught his interview with Lee Kuan Yew, the founder and former president of Singapore. There's much wisdom here, on both sides of the table. Part 1. Part 2.
Posted by Terry (John) at 2:53 PM No comments:

The Man Who Walked 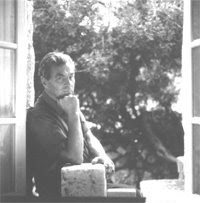 As I reach a certain age, I seem to have accumulated quite a list of books that have "changed my life." But the place of William Dalrymple's From the Holy Mountain is secure. I was pleased to read an interview he conducted with his own inspiration, now 93-year old Patrick Leigh Fermor. Years ago, I read Fermor's first travelogue, A Time for Gifts. For travel writing enthusiasts, this interview is as good as it gets. An excerpt, below:

One of the books he chanced across was The Station, Robert Byron’s newly published book about his travels through the monasteries of Mount Athos. A subsequent meeting with Byron in a ‘blurred and saxophone-haunted nightclub’ made Leigh Fermor, aged 18, ache to follow in the author’s footsteps and visit ’serpent-haunted dragon-green Byzantium’. He had also read George Orwell’s Down and Out in Paris and London, published in 1933. With nothing to keep him in Britain he set off, having first borrowed a knapsack that had accompanied Byron to Athos, aiming to walk to that living fragment of Byzantium while living as cheaply as Orwell: ‘I loved the idea of roughing it.’
On the wet afternoon of December 9, 1933, the year that Hitler came to power, as ‘a thousand glistening umbrellas were tilted over a thousand bowler hats’, Leigh Fermor left London, boarding a Dutch steamer at Irongate Wharf. His rucksack contained pencils, drawing pads, notebooks, The Oxford Book of English Verse and a volume of Horace. He would not lay eyes on Britain again until January 1937, when he returned ‘for better or for worse, utterly changed by my travels’.
‘I thought I’d keep a diary and turn it into a book, which of course is what I did,’ he said. ‘Except I am still writing that book more than 70 years later.’ It was not just that the journey gave Leigh Fermor the subject for his lifework, it ‘broadened my mind, taught me history, literature and languages. It opened everything up: the world, civilisation and Europe. It also gave me a capacity for solitude and a sense of purpose. It taught me to read and to look at things. It was a great education. I didn’t go to university, I went travelling instead.’

For the full interview, read here, and thanks to Andrew Cusack.
Posted by Terry (John) at 7:05 PM 3 comments:

This year's GOP convention has been more or less cancelled, in light of the greater political expediancy to show compassion and hopefully, competence in the face of Hurricane Gustav. This may be something of a blessing in disguise for the GOP, as both Presidents Bush and Cheney have cancelled their speaking engagements there. Before all that was decided, however, Christopher Buckley was kind enough to provide us with a schedule of convention events, found here. I just wish he had done the same for the Dems. Enjoy.
Posted by Terry (John) at 8:59 AM No comments: