"Are We Rome?" Discussion 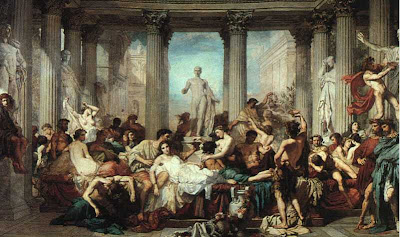 One of the most interesting discussions I've come across recently is the diavlog between Rod Dreher, author and journalist with the Dallas Morning News, and Cullen Murphy, author of Are We Rome?, found here. The periodic comparisons of our ongoing American cultural decline to that of ancient Rome always makes for a good debate. Personally, I believe strongly and unequivocally that...well, it is...and then it isn't. Similarities abound, certainly, but these are sometimes simplistic and superficial, and there is obviously much that is dissimilar between the course taken by the two empires.

I have some major reservations with the hypothesis. First, Rome really didn't fall, as such--or at least not the way generally thought, or when generally thought. Certainly there were times when the barbarians were literally at the gates, so to speak. But there was never a time when a Roman citizen of southern Gaul, for example, would stop and say, "my, haven't things been crappy since Rome fell." From my readings, I find no sense of such a sudden change. Societies changed and evolved, and in many ways declined, but the transformation was slow and often imperceptible and life went on.
Also, the end of Rome is either tagged at 410 AD (Visigoths), 455 AD (Vandals), or 476 AD (death of Romulus Augustus). But by the time Rome "fell," it had already been superseded (and eclipsed) by the New Rome (Constantinople.) These Romans of the East thought of themselves as exactly that, the "Romaioi." They would have been puzzled if anyone had addressed them as a Byzantine. And not only that, but this New Rome-for centuries, the marvel of civilization-continued on until 1453. So, even if one were to buy into the whole America=Rome theory, the date used for comparison is about 1,000 years shy of the final fall. The Roman experience is instructive for any culture, in any time, but one should be cautious in drawing too many comparisons.

That said, comparisons are easy to come by, even with the Eastern Romans. I am currently reading Michael Arnold's Against the Fall of Night, a 1975 fictional account of the Comnenian Revival of 12th-century Constantinople. In many ways, the era (1080-1204) marked the very pinnacle of Byzantine civilization. But behind the glitter and pageantry, the rot had already set in, their projected power something of a deceptive facade. For centuries, Constantinople had maintained a defensive posture--simply trying to maintain its borders, or what had once been theirs. This changed with the latter Comneni, who were aggressive militarily, which quickly exacerbated the underlying weakness of the empire. But even after the catastrophe of 1204, the Byzantines came back and held on for another 200 years.

American culture may have even more in common with Rome than we realize. But these things work out over extremely long periods of time. Even if true, we have a bit of a run yet, and I doubt if things will play out exactly as the doomsayers often predict.
Posted by Terry (John) at 12:23 PM 12 comments:

I've been a bit under the weather recently, more than a little tired in both body and spirit. A required continuing education seminar in Kerrville, TX last Saturday provided me the perfect opportunity to recharge my batteries while enjoying a bit of the Texas Hill Country. Really, a day or two out and about around Austin does me more good than most anything I know. I left after work on Thursday and returned home on Sunday. I had to spend 8 hours on Saturday at the seminar. But being an old hand around these environs, I managed, along the way, to work in the following extracurricular activities:

Austin is one of the big "what ifs" in my life. Like most everyone who attended college there, I really didn't want to leave. Of course, the Austin of my memory and imagination is long gone. The city is our version of Silicon Valley, awash in money and experiencing explosive growth. I was surprised to see that the Austin suburbs have reached Seward's Junction on Highway 183 North. And there used to be a interesting little crossroads community called Bee Caves, on the road to Llano, right before the turn-off to Hamilton Pool. There was never much there--a general store, a Baptist church and cemetery, a clutch of homes and a cedar-chopper's shack with a hand-painted sign advertising his prices for fence posts. It is now, simply gone. In its place is a shopping mall and a huge highway interchange at the main turn-off for the ritzy lake area subdivisions. The hills around the city are chock-a-block with faux Tuscan villas spilling down their slopes, each a little more over-the-top than its predecessor. I had to wonder, what with all the concern about the banking and mortgage crisis and fears of a recession, etc., just how close to the edge of financial ruin the occupants of many of these pretentious homes must be.

But in spite of our best efforts, and in light of all that has been lost, thankfully Austin is still Austin. Progress has failed in its concerted attempt to destroy the place absolutely. For Austin still attracts a certain kind of person, and that is where the real beauty of the place lies.

My headquarters in Austin is always the Austin Motel, a funky little tourist court on South Congress (or as some are trying to tag the area "SoCo"). It dates back to 1938. Actually, a German family bought the entire block in 1888 and operated various mercantile business there before building the motor court. Incredibly, this same family continued to operate it up until 1961, when they sold it to the current owners. So, the property on the main drag in Austin, within sight of the Texas Capitol, has been owned by only 2 families in the last 119 years. You can read about its history, here. What clinches the deal for me, though, is the best motel pool in town. Designed in the old style for real swimming, it is a secluded little oasis under the shade of a 100-year old live oak. And right next door is Jo's, a walk-up coffee and sandwich place. There's no better place to soak up a little authentic Austin atmosphere than sipping your coffee on one of their street-side tables.

I enjoyed visiting with my cousin. She divides her time between her parent's old home in Austin and the ranch house that has been in her family for 5 generations, some 80 miles north of the city. In her great-granddad's time, the ranch had encompassed 1100 acres or so. Sales and family partitions have reduced that to the 143 acres her dad inherited, including the old home place. She has lovingly restored the old place and spends as much time out there as possible. The surrounding area is being developed into 10-20 acre ranchettes, which is in the nature of things, I suppose. We talked of Major, the Australian sheep dog who was the last in a long line of sheep dogs on the ranch. I remember Major from visits to the ranch in the early 1990s. After her grandfather's death in 1994, Major continued to live on the ranch, as my cousin's father made almost daily trips there. But in time, he was moved to the Austin neighborhood, where he passed away in March, at over 18 years.

Holy Archangels Monastery is a bit hard to find (as it should be, I suppose), but well worth the effort. The construction of the complex surrounding the church is quite impressive, and beginning to take shape. There were about 12 of us there at the service, in addition to the monks. Of course it was all in Greek, with men on the right and women on the left. But once again I was reminded of how important the monastic presence is to the continued growth and expansion of Orthodoxy in North America. The next morning, I attended Liturgy at an Antiochian congregation in the northern suburbs of Austin. They are currently meeting in a converted ranch-style home, with fairly advanced plans to build in the coming year or two. The service was packed--easily 80 people in the former home, with probably upwards of 100. The service was vibrant; everybody participated in the responses, like the good ex-Baptists and ex-Church of Christ folk they probably all were. I was struck by the youth of the congregation--young people and young families predominated. At first glance, these two services seem dissimilar, but taken together, each speaks to the steady growth and vitality of Orthodoxy down here in the South land. 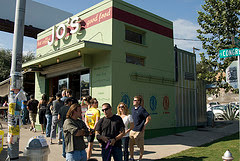 Georgie Anne Geyer is always good. In her most recent article, she writes on one of my favorite subjects, Turkey. Read it here.
Posted by Terry (John) at 5:20 PM 4 comments:

The Sunday Times reports on the goings-on in Chadron, Nebraska in A Rough Script of Life, if Ever There Was One. About 5,600 people reside in this rural outpost in far northwestern Nebraska. The Chadron Record is the newspaper of record in the area. Outside of the obituaries, the most popular feature is "Police Beat," where transcripts of calls to the police dispatcher are published. A selection follows:

Caller from the 900 block of Morehead Street reported that someone had taken three garden gnomes from her location sometime during the night. She described them as plastic, "with chubby cheeks and red hats."

Caller from the 200 block of Morehead Street advised a man was in front of their shop yelling and yodeling. Subject was told to stop yodeling until Oktoberfest.

Caller from the 400 block of Third Street advised that a subject has been calling her and her employees, singing Elvis songs to them.

Caller from the 200 block of Morehead Street advised that a known subject was raising Cain again.

Officer on the 1000 block of West Highway 20 found a known male subject in the creek between Taco John's and Bauerkemper's. Subject was covered in water stating he was protecting his family. Officers gave subject ride home.

Caller on the 900 block of Parry Drive advised a squirrel has climbed down her chimney and is now in the fireplace looking at her through the glass door, chirping at her.

Caller from the 800 block of Pine Street advised that she had just left some one's home and she forgot her jacket, and requested an officer to get her coat.

Caller from the 100 block of North Morehead Street requested to speak to animal control because caller felt that someone was coming into his yard and cutting the hair on his dogs. Dispatch advised caller to set up video surveillance on his house. Caller said he planned on it.

Caller stated that there is a 9-year old boy out mowing the yard and feels that it is endangering the child in doing so when the mother is perfectly capable of doing it herself.

The story is only available through "Times Select," so I cannot provide a link.

The writer notes that "it records those small, true moments lost in the shadows of the large--moments that may not rise to the Olympian heights of newsworthiness, yet still say something about who we are and how we create this thing called community."

So slow down the next time you are going through Chadron. You might even want to stop in at Taco John's or Bauerkemper's. But it might also be wise to avoid the "high-crime area" of Morehead Street.
Posted by Terry (John) at 4:45 PM 7 comments: