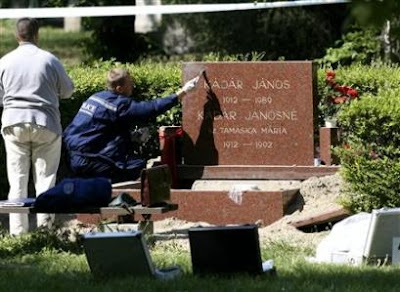 The grave of Hungary’s last communist ruler, Janos Kadar, was pried open and his remains and his wife’s urn were thought to have been stolen, the police in Budapest said. The marble cover stone of Mr. Kadar’s grave was removed and his coffin was broken. Graffiti that read “a murderer and traitor may not rest in holy ground” was nearby. “The bones appear to be missing, and it also looks like his wife’s urn is gone, too” said a spokesman for the police, Endre Kormos. Mr. Kadar ruled Hungary from 1956, when Soviet troops crushed the anti-Communist uprising, until 1988 when he retired. He died a year later in July 1989, less than a year before the country’s first free post-Communist elections.

I recall that the Bulgarian government itself destroyed the mausoleum of Georgi Dimitrov, founder of the Communist regime there. It was as ugly as one could imagine, and located directly across from the old Royal Palace on Prince Alexander of Battenberg Square. It took a week and 4 attempts, but the eyesore was finally dynamited. One would hope that someone in Moscow was taking notes for the Lenin Mausoleum.

But really, this sort of thing is still distasteful, even for these old Communist thugs. The French monarchs, almost without exception, were buried in the Basilique Saint-Denis. The royal crypt, with its cadaver tombs, is as macabre a place as you would ever want to visit. During the French Revolution, the government opened all the graves, and the remains of hundreds of French royals dumped into a large pit. Only years later were the bones gathered up and re-interred in a common grave in the crypt. And of course, such was the fate of the last Romanovs.

So, such behavior has a long history. But those that do so today fall to the same level as the French anarchists of the 1789 and the Bolsheviks of 1917.

I've just tagged you with a "Saints Meme." If you like, post on who your four favorite saints are, who your favorite "blessed" saint is, and/or who you'd like to see glorified as a saint one day. My response is here; please post a commment there if you chose to respond to the meme on your blog. Thanks!