Every summer the wife and I trot off to a family reunion, usually held somewhere in the Deep South.  Attendees are relatives on my mother's side, though the closest kin to me are descendants of some of my great-great-grandfather's brothers.  So mainly, the people are just long-time friends we've made over the last 33 years, who all just happen to descend from the same German immigrant born in 1758.  Before we left, my wife asked, "isn't this thing ever going to die-out?"  We always enjoy it--once we get there. 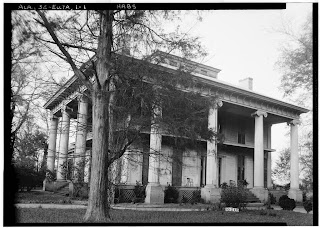 The venue this year was a lodge on Lake Eufaula, on the Alabama-Georgia border.  We made a long weekend of it, leaving late Thursday, and coming home Monday.  I tire easily of the interstate, and leave it at the first opportunity.  My doing so made an easy five-hour trip from Jackson into an eight-hour drive.  But I am glad I did.  I turned off I-20 and meandered down through Eutaw, Greensboro and Marion--the heart of what is called the "Black Belt."  These towns get little hype, which make them all the more interesting.  The wife and I enjoy the Deep South, but usually for it's literary connections--Faulker's Oxford, Welty's Jackson, Percy's Greenville, Chopin's Nachitoches, Lee's Monroeville or O'Connor's Milledgville--that sort of thing.  But I also remember the classic line from Stars Fell on Alabama, "For God's sake, get out of here before it's too late."

We always drive around the courthouse squares of these little towns, where my wife is on the look-out for old-time hardware stores.  We hit three of them along the way, picking up a homemade step-ladder in one.  We also stumbled upon this, housed in an old store-front, two blocks off the courthouse square in Greensboro.  Any business with the word "pie" in the advertisement is going to get my attention.  As it turns out, the enterprise is owned and run by young people, with oversight and support from UA.  And yes, the pie was delicious.  On the return trip, we found "Bates' House of Turkey," where you can either have turkey and dressing, or a turkey sandwich.  I appreciate a place that does one thing, but does it very well.

The reunions are usually an interesting and convivial mix of old-money Mobile azalea-district meets red-clay Georgia back roads double-wides.  There's always a memorable line or story we bring back home.  Saturday afternoon, we were wandering around a thrift store in downtown Eufaula and bumped into a Georgia couple we've known for many years.  The talk turned to my wife's bout with poison ivy after cleaning out around the house in early summer.  The woman suffered from it as well, and told the story of her mother taking her down a back country lane as a child.  Their destination was a "conjurer," a local woman who "conjured" her poison ivy away.  My wife just looked at her, and finally asked, "if she is alive?"  My cousin Selma is always good for a quote.  She is in her mid-50s, unmarried, and lives in her mother's gracious home on a shady, old-money Mobile street.  That description, while accurate, paints the exact wrong impression, however.  She is also an outspoken, firebrand Democratic Party activist and attorney who gravitates towards representing those from the wrong side of the tracks--in other words, an old-school Southern liberal in the very best sense of the word.  A graduate of the University of Alabama, she was shocked to hear that one of her nieces was contemplating Auburn.  "Auburn??  I'd rather hear that she'd become a Republican than go to Auburn!" 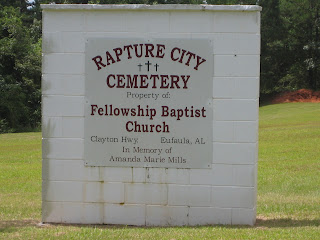 Eufaula was a pleasant surprise--a historic downtown complete with good food and drink, but situated (now) on the shores of a large recreational lake.  The city makes good use of both advantages.  As one resident put it, Eufaula was just far enough away from Atlanta, but just close enough to Panama Beach.  The only discordant note was my discovery at the Eufaula Piggly Wiggly that you cannot buy a half-case of Yuengling to carry back home on a Sunday in Barbour County, Alabama.
Posted by Terry (John) at 10:03 AM 2 comments: 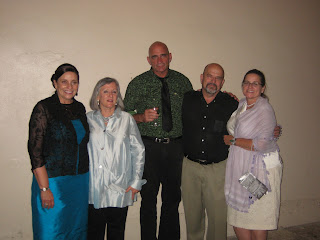 My family has never been one of those big-wedding clans.  When I would see movies and television shows depicting Father of the Bride  type extravaganzas, complete with wedding planners, a full church, elaborate receptions and dance bands, I would always think "Do people actually do that?"  Of course, I know people do-just not my bunch.  Perhaps my parents set the tone when they eloped 76 years ago.  My grandmother followed my mother across the yard to where my dad was waiting in his roadster--wagging her finger at her daughter and telling her not to ever come back if she left with that man.  My wife and I wanted to elope as well, but her aunt insisted on a church wedding, primarily because she wanted to host the reception and show-off her new house in the process.  And so we did--my wife's niece was her one attendant, her cousin my best man, her father the minister, and cake and punch at her aunt's afterwards.  Of course, these days I have a different outlook on it all, but that is the subject for another post.

This summer, my extended family did in fact have one of those Father of the Bride weddings. My cousin is a school teacher of almost forty years, but her husband is a doctor of almost 25 years, which makes this sort of thing considerably easier to pull off. The bride-their daughter-is incredibly beautiful, with a personality to match. Both she and her brother and their cousins are just fine hanging out with their parents' old-fogey cousins. They were raised right. The groom looks like a good fit, as well. I think they will be just fine.

This was an "away" wedding, the venue being the Chapel of the Incarnate Word at the college of the same name in San Antonio--"chapel" being something of a misnomer as it is an immense, ornate sanctuary built in 1907 when Catholic architecture still meant something. The Chapel of the Incarnate Word is one of those unusual churches with the pews facing each side of the central aisle. Most of my cousins are Catholic and they had never seen this done either.    The newlyweds will live in San Antonio where he will attend medical school.

My cousin from Arkansas drove down, and rode the rest of the way with my wife and I.  My son took his own car.  We stayed in the grand old St. Anthony Hotel downtown, built in 1909.   You almost cannot have a bad time in San Antonio, and we certainly didn't.  The wedding reception following was in the old Ursaline Academy, a historic 1850s convent right on the River Walk, now rented out for events like this.  The bridal party went back to their hotel, boarded a barge and floated down the river to the Academy, where we were all waiting, hors d'ouerves and drinks in hand.  Later at the meal, I felt a little odd having food and drink in what had clearly once been the convent's chapel.  During the meal, one cousin had my wife's ear the entire meal--no mean feat that, as my beloved is herself a conversationalist of the first order--while I chatted with my 88-year old aunt by marriage-the grandmother of the bride-who thought it all a little too much.  The mother of the bride was much occupied with the wedding planner, as there were, apparently, the requisite wedding crashers.  At some point during the night, we five first cousins stood together for a photograph outside the convent.

I've always been closer to my paternal cousins than my own siblings--both much older than myself.  My brother is deceased, but I have a sister who lives about six miles away.  I called her in early February, to tell of a family member's death, and before that I had not talked with her for about two years prior.  If I never call her again, I will never talk to her again.  This has been the pattern for almost 30 years and I am long used to it.  She has children, grandchildren and great-grandchildren,  but apart from my deceased brother's son, I am, in effect, an only child without nieces and nephews.  And so, my cousins filled this void.  There were 15 of us, all told.  (I have the same number of maternal cousins, as well, most of whom live nearby.  Unless I was handing out cash, however, I could not gather a quorum of them if my life depended upon it.)  One uncle's children by his brief first marriage always lived in California, and consequently were never in the mix.  One of their half-brothers met one of them, once.  My brother and sister never cared to keep up the connections with the cousins.  And so, that left eleven of us.  The picture below is of the eleven of us around our granddad in 1962:  Butchie, Dickie and Ronnie;  Debbie, Billy and Ellen; Susan, Daniel, Janet and Robert; and myself.  I always thought they were the neatest cousins anyone could have, and I still do.  We're a bit scattered now--North Carolina to Missouri to Arkansas to several locations in Texas.  But somehow, we manage to keep up with one another--sporadically to be sure, but still ongoing.  Cousins are the best. 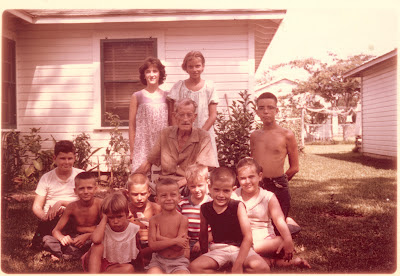