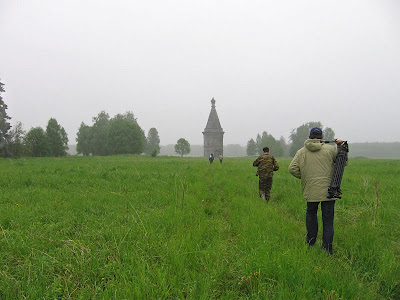 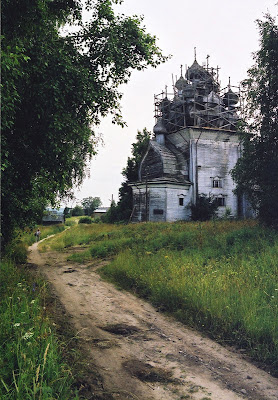 I came across these incredible photographs at the Pravoslavie site. The captions are in Russian, so I can only make assumptions about the subject matter. They seem to be of rural Russian wooden churches from the 17th and 18th centuries. There are a number of "before and after" shots, as some of the churches are being restored. Unfortunately, it may be too late for some of the others. The photography is impressive and moving. All can be seen here. 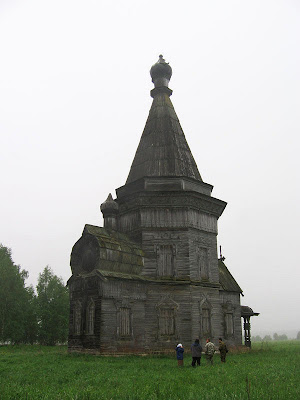 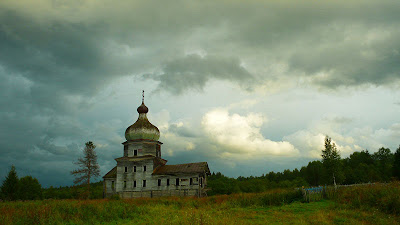 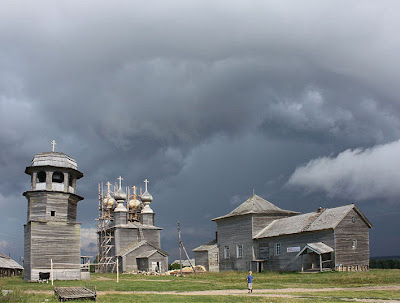 Some Observations by Dr. Brzezinski

I always enjoy when Mika's dad is a guest on the show. Just returning from overseas, he touched on a number of subjects in a 14-minute interview. Dr. Brzezinski requires little coaxing to say what is on his mind. Often too much a globalist for my taste, his plain-spoken realism, however, is in short supply these days. His comments--while sobering--are a welcome antitode to the usual blather.

Russia:
In a "state of unease, uncertainty"

Germany:
"a sense of uneasiness" about America

Our Middle East policy:
"disintegrating before our eyes"
"absence of any sense of strategic direction"

Our opposition to Palestinian statehood in U.N.:
a "tragic historical error"
"blind people looking at today and mostly at yesterday are leading"
"an evasion of historical responsibility"
"both the United States and Israel with be totally isolated in the Middle East"

Israel:
"isolating itself by an increasingly self-destructive policy"
"6 million people are ruling 5 million other people--that's not stable"
"in the long run, not a formula for survival"
"perpetual conflict and eventual fading of the security of Israel and its prospects for survival"

Pakistan:
"we are willing to be part of the solution, but we are not going to be there eternally, solving the problem for the region, if they are not willing to participate with us...we are going to pack up and leave...throw the ball to the Chinese...and it will be their problem"

The American Poor:
"the remnants...are deprived"
"prescription for social conflict, in addition to economic paralysis"

GOP Candidates:
"going through kind of a lunatic phase in our politics"
"living in a never-never land of illusions, slogans, passions, convictions--very unrelated to reality"
"literally frightening" 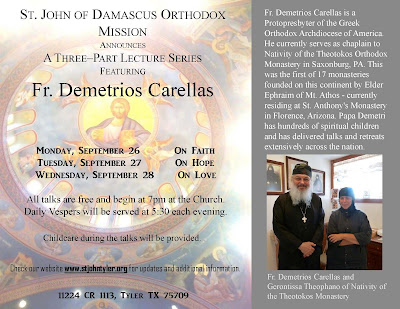 St. John of Damascus Orthodox Mission is hosting a lecture series featuring Fr. Demetrios Carellas on September 26th through 28th. The talks will be at 7:00 PM each night, preceded by Vespers at 5:30, with refreshments in between. If you are within driving distance of Tyler, Texas, we hope you will consider attending.
Posted by Terry (John) at 11:45 AM No comments:

I spent a pretty normal Sunday yesterday--church, then council meeting, then back home for some reading and a bit of writing. I watched no television, save for a few choice scenes from It's a Mad, Mad, Mad, Mad World--which I know by heart already. I purposely bought no newspapers. Nor did I purchase any of the requisite commemorative magazines. In short, I completely avoided taking any notice of 9/11. Our little town pulled off a large memorial service at the halftime of our homecoming football game on Friday--complete with a field-sized flag, fly-overs, and a ladder truck from the NYFD. They even borrowed our antique bell to ring in commemoration. We didn't go. My wife and I did not even talk about it during the weekend. This morning's local headlines were of the Tyler extraganza at the megaBaptist church, with firefighters and police front and center, American flag videos running continuously on both movie screens flanking the podium, and a rousing medley of patriotic songs, which is all appropriate, I suppose, if your religion is Americanism, rather than Christianity.

I do not discount the horrendous human tragedy of that day. Human carnage is sickening--all of it. I suppose the thing is this: I cannot divorce the events of 9/11 from everything that has come afterwards--our lost, fearful disastrous decade which shows every sign of becoming a lost, fearful disastrous generation. I'm not saying we should forget--far from it. Remember the tragedy and the lives lost in the conflagration. But the event and--God forbid--our response, should not define us as a nation.

I find it hard to express exactly what I want to say, but I am largely in sympathy with the sentiments of the following articles.


A superb collection at Tipsy Teetotaller

And this from Fr. Andrew Stephen Damick:

Orthodox Christianity is about coming face to face with death, grappling with death, and wrestling it to the ground. It is not about accommodation to this world. Those who prefer to be accommodated to this world will always be utterly devastated by moments like 9/11, because they cut so sharply into the comfortable complacency of a consumerist culture. For them, it is true that nothing will ever be the same. But those who will not surrender, those who will not be defeated by death or by the world that death holds in its thrall, those who have put on Christ and struggle to put on Christ every day—they cannot be destroyed.