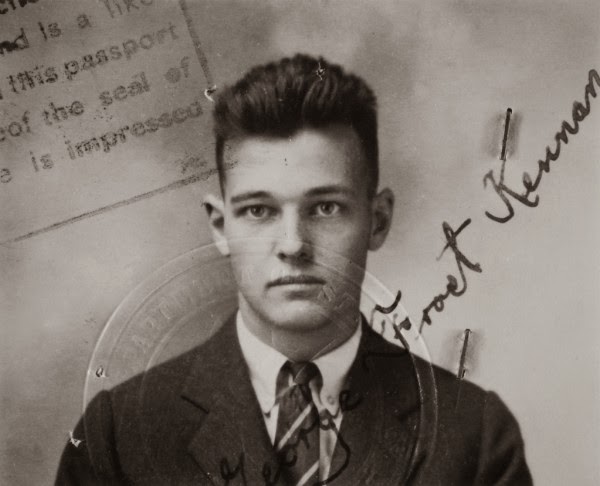 This is the second installment of selections from The Kennan Diaries:  George F. Kennan, edited by Frank Costigliola.

The first entry from 1936 naturally caught my attention, as Kennan found himself in the Soviet Republic of Georgia. While I might quibble here and there, I found that his observations largely rang true of this proud and idiosyncratic people.  He accuses Georgians of laziness--perhaps the cardinal sin for someone of Kennan's Midwestern Presbyterian background--but it is a noble laziness.  His account agrees with that written by W.E.D. Allen just a couple of years later.  Both men foresaw that the Georgians would outlast the Russians--just like they had everyone else.

Kennan's entry from 1933 displayed his lifelong pessimism (even at age 28) about the trajectory of his own nation.  He exhibited little patience with the foibles of his countrymen.  Kennan expected the worst, and the broad American culture rarely failed to disappoint.  But an entry from 1939 revealed that he remained at heart, a thoroughly "old" American who sneered at the cheap sentimentality of the British.
.

"Kutaisi and Tiflis were too much alike to be described separately. They are essentially oriental cities, cities of the Near East. Hot sunshine, dust, overcrowding, intense street life, poverty, disease, and deceit seemed to be their main characteristics.
The Georgians are a lazy, dirty, tricky, fiercely proud, and recklessly brave people. They never seem to work unless they have to. The Transcaucasus is the spiritual home of the drug store cowboy. The streets are packed with loafers at all hours of the day.
Transcaucasian filth is the filth of the Orient. Compared to it, Russian filth seems earthy and wholesome.
The Georgians claim to have acquired their trickiness from their dealings with the Armenians. However this may be (and to the outsider it seems an idle question), Tiflis and the entire Trans-caucasus seem to be rampant with corruption, speculation, and crookedness. It is commonly believed that every cashier in Tiflis makes an average of two or three hundred rubles a month on the side, by crooked means. Many of the state funds flow into channels other than those for which they were allotted. Arrears in the payment of wages are a chronic evil which not even the best efforts of the state have been able to alleviate. The teachers seem to be the hardest hit in this respect.
The pride of the Georgian is well known. He looks down on all the neighboring races, with the possible exception of the Turk, for whom he has a certain respect as a fighter. The Armenian he hates virulently, and the Russian he holds in contempt.
Being an intense individualist, he has a typically romantic conception of honor and dignity. He will stand being cursed better than he will stand being laughed at. He considers that it is better not to live at all than to live with besmirched dignity. He is willing to fight at the suspicion of a sneer or a slight.
As a result of this same individualism, he shows great daring and spirit in an individual, hand-to-hand encounter, but makes comparatively poor material for a military organization. The Caucasian military units (I understand there are two divisions of locally recruited troops stationed in the Transcaucasus) look sloppy in comparison with Russian units.
Although the Georgian nationalists do not like Stalin, they have every reason to be thankful to him. They are still the only remaining independent people of any importance in the Soviet Union. This is borne out by thousands of little indications by the faces and behavior of the people, even by the number of loafers and beggars in the Tiflis streets.
The Georgians have never regarded themselves as having been conquered by the Russians, or as being a subject race. The Russians, in their view, simply bribed their princes and grained access to their towns. Russian soldiers, they told me, had never subjugated the country districts. At the present time, the Russians were only a tool in the hands of one faction of ambitious Georgians. To hell with them.
Since the Kirov murder, Moscow's grasp on the Transcaucasus has begun to tighten up. It is doubtful whether Stalin, in the face of the consolidation of his power and his economic success in Russia, will be willing to tolerate much longer the laziness, the backwardness, the corruption, and the defiant, romantic nationalism of his compatriots.
Georgia will be a hard nut to crack. But Stalin's nutcracker has cracked hard nuts before, and at the present moment it is stronger than ever. Outside observers who have had an opportunity to study Georgia at close range for a long time feel that this contraction of the Moscow nutcracker, when it occurs, will be the best thing that ever happened to the Georgians...
The country was rich with the remnants of every sort of old culture: Roman, Greek, early Christian, every pre-historic. It was evident that man had scratched out a scanty existence on these barren, almost biblical hills for many a century.
We passed a dam and a hydroelectric station, built some years ago by a German firm. Over it stood a statue of Lenin. The outstretched arm pointed downward, and, local wit had it that he was indicating to the faithful where they should look for his soul.
One wondered whether some day that electric station and the statue of Lenin would not join the rich assortment of historical ruins and mementos which littered the surface and the bowels of those hills--whether, a thousand years hence, the era of Russian domination might not be recorded by historians as merely a brief and minor link in the long chain of the history of the Caucasus. It was difficult to believe that the crude stamp of Soviet Muscovy would leave a mark deeper than the mighty cultural influences of Greece and Rome."

"Sunday. Stayed home all morning. Lunched downstairs. Anna Freud came over in the afternoon, a middle-aged woman with tired, deep eyes and a sensitive, intelligent face which, once seen, will not readily be forgotten.
Later we went downtown. We walked around past Buckingham Palace and past a park where the ponds were beautiful and full of ducks and smelled abominably.... Thence to a big movie house, where we saw Goodbye, Mr. Chips and I was disgusted at the sentimentality and romanticism with which the British upper-class loves to surround itself."
Posted by Terry (John) at 8:11 PM 1 comment: