I'm in a bit of a blogging slump these days. I remain determined to avoid any discussion here about the current presidential race (at least until it's over). That takes a lot of material off the table.

Some of my favorite writers are certainly not suffering through any slump. For starters, I enthusiastically recommend the two posts below:

Fr. Stephen Freeman posts his thoughts on "The Orthodox Church and Personal Salvation," using a recent Franklin Graham Crusade to Ukraine as a springboard, here.

And over at Second Terrace, here, I find one of the best essays I've read on the nature of true conservatism.

On Memorial Day, I will be leaving to do a bit of traveling. When I return on June 17th, I'm sure I'll have much to discuss.
Posted by Terry (John) at 1:36 PM 4 comments:

May at my house

Gardeners out there will appreciate these pictures, and I ask that the rest humor me a bit as I show off my oakleaf hydrangeas. I have over 30 of these plants scattered around the yard--most raised from cuttings and some now 8 ft. high. I raised 9 plants from cuttings this year that I will add here and there, and around the neighborhood. The pug is Bert, the benevolent and lovable ruler of our household. 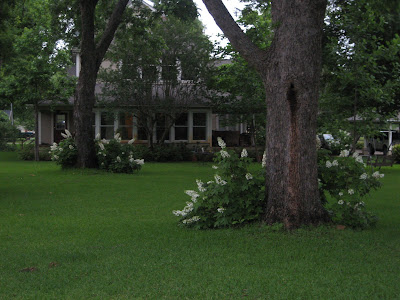 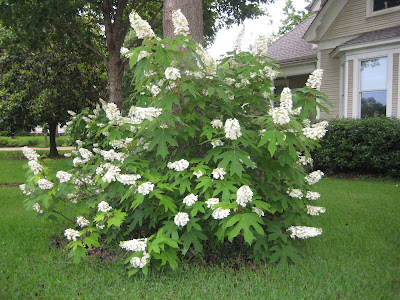 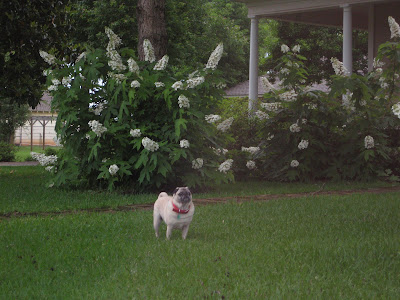 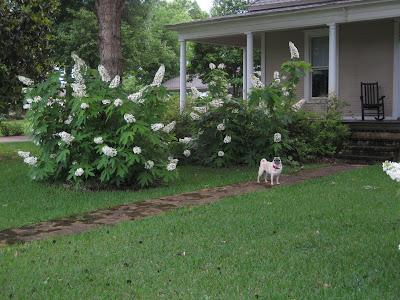 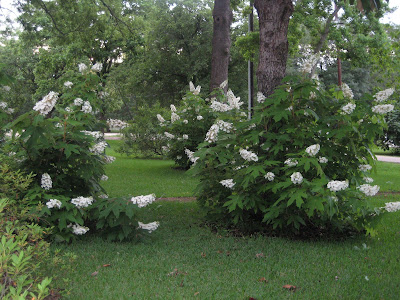 Things are moving along at our little Orthodox mission here in East Texas. I like to sit in on the inquirer's classes offered before Saturday Vespers. We are currently studying An Exact Exposition of the Orthodox Faith by St. John of Damascus. This is one of those works that I have read at, but might never have really engaged if not for the discipline of a weekly class and discussion. St. John of Damascus is rich beyond measure, but I was particularly struck this week by a turn of phrase in the 3rd chapter.

For the things appertaining to the rational world, I mean angels and spirits and demons, are subject to changes of will, whether it is a progression or a retrogression in goodness, whether a struggle or a surrender....

St. John continues on with this line of thought, but I kept coming back to the phrase--a struggle or a surrender. That sums up our earthly existence rather well, don't you think? We either live lives of struggle, in cooperation with the grace God so richly bestows on us, or we surrender to our passions, desperately attempting to ignore the mutability--in St. John's language--of our nature, and the immutability of our Creator.

Struggle or surrender? As mottoes-to-live-by go, we could certainly do worse.
Posted by Terry (John) at 1:55 PM 2 comments:

A few weeks back--right around western Easter--my wife and I made a short, overnight trip down to central Texas. She likes to go to Salado, one of Texas' most historic communities, now chock-a-block with shops and boutiques full of the nonessentials of life. My wife enjoys browsing the shops, and ultimately purchasing nothing. There's a good used bookstore we always hit, as well as the main draw for me--the Stagecoach Inn--an old watering hole dating back to 1854 or so, offering some of the best cooking around. Most travelers zip down Interstate 35 totally oblivious (thankfully) to this little detour. About 30 twisting miles west of Salado lies that isolated corner of the Hill Country where my dad grew up. A trip to Salado necessarily involves a loop through this area, where we place flowers at graves of loved ones and touch base with the remaining familiar landmarks.


On any road trip, one of my favorite pastimes involves observing the churches I pass along the way. I commented on this at great length, here, a couple of years ago. American religiosity provides endless fodder for the irony mill. We were not far from home, before I noticed a banner outside a small Methodist Church. The church sits on a small lot on a side street of a once-rural, now thoroughly suburbanized community. The Methodists are struggling, it seems, to remain relevant and attract new congregants. The church itself was built back in the 1920s, with a large front porch, flanked by shady sycamores. Worship services are now livened-up with a bluegrass band, made up primarily of their own church members. For Easter, they staged a bluegrass concert on the front porch, and invited people to back their trucks up to the church and sit on their tailgates for the service. The banner read something like "Have a tailgate Easter at _____ Methodist Church." So much for your timeless tradition. It's a different setting, of course, but the exact same formula as the "Jazz Communion" I spotted at a toney Presbyterian Church in Houston a few years back. I wish them no ill-will, but when you see this sort of thing, you know that the battle has already been lost there.


On down the road a bit, the highway slices through a particularly bleak little community. It has been a tumble-down sort of place for as long as I can remember. But I happened to take note of a ramshackle little church that I have seen all my life. What struck me this time was that their steeple--sitting a bit precariously atop the roof--had been duct-taped together, so that it was now a shimmering silver color. I was touched--there was something Flannery O'Connor-esque about the sight. Somehow, this little church with the duct-taped steeple engendered more sympathy with me that I had for those toe-tappers over at Tailgate Methodist.


Churches along the Interstate can be even more bizarre than what one finds on the backroads. For a church to be located on the interstate means that marketing, by definition, plays a large role in their decision-making. On the south side of Waco, I spotted a large church of the non-denominational variety--I forget the name, but I'm sure it had the word "Outreach" somewhere in the title. Anyway, the church sported a long banner stretched across the entire front of the building, promoting their new "30 Minute Worship at 9:30." Frankly, I don't think they're trying hard enough. You can't tell me that with a little work, that they couldn't shave that down to 23 minutes or so. Maybe they could install credit-card swipers where you enter the building. Certainly, this could cut out all that down time spent passing the collection plate. What with the pressing need for welcoming remarks, jokes and announcements, and the absolute necessity to have 3 or 4 uplifting and zippy praise songs, I feel like they should drastically scale back the sermon--maybe have one of those "Minute with the Master" type sermonettes one used to hear on the radio. Certainly, I think with a little more planning, they could get everybody in and out and on their way to Starbucks in 23 minutes or less.


Though only about 30 miles out of Salado, it takes a bit of doing to reach the family cemeteries. The old communities of Oakalla and Maxdale are well off the main road, on the way to nowhere in particular. My grandparents are buried in my grandmother's family cemetery, which is relatively accessible. My granddad's parents, however, are buried in the old community cemetery down on the river, some 7 miles distance. Even though my dad and granddad were both born there, only the great-grandparents are buried in that community. I always took a bit of secret pride in going there. My family's monuments are generally of a modest nature, but these 2 stones are impressive and commanding. I later learned that my granddad and my two great-aunts purchased the monuments with the money they received from the sale of the farm in 1919--a totally impractical and foolish thing to do, some would say. But I understand completely, and love them all the more for it. Anyway, the community, as such, is no more--the only touchstones remaining are the historic old 1914 bridge over the river (seen in the movie Second Hand Lions), perhaps the most beautiful cemetery in Texas, and the little Baptist church. The church is a one-room affair, with a high-pitched tin roof, built in the late 1890s or early 1900s. The site still maintains a permanent outdoor arbor for revivals and dinner-on-the-groud. This was never our church--my paternal lines divided neatly between Presbyterians and Campbellites, but never Baptists. Yet, the church was always something of a touchstone for me...until now. The little chapel in the valley is now a "cowboy church." The sign out front displays not a cross, nor a verse of scripture, but a silhouette of a cowboy roping a steer. For better or worse--and believe me, back in my Church of Christ days we used to have heated discussions with them--the Baptist Church had theological legs. They stood for certain perceived truths. In the past, we would argue our "faith which works" against their "faith without works." I don't know what positions the Cowboy Church takes....Wranglers vs. Levis, perhaps. The bottom line, the church is now defined by the hobby and fashion choice of its members.


I recently visited a local coffee shop on my way downtown. I arrived too early, for a gaggle of attorneys were still holding court inside. I got my bagel and coffee and found a corner table where I thought I could read my newspaper in peace. But it was impossible not to overhear their banter in this one-room shop. They were discussing the various civic organizations of our city, and the self-congratulatory nature of these groups as they passed awards back and forth among the usual suspects. One attorney commented on how this had always been the path to success in the business community here. He went on to say that such is not the case anymore. The fast path to riches now requires membership in the local Baptist megachurch. The "Baptidome," as it is commonly described, reportedly has 20,000 members (though this seems a little over-stated), has completely subsumed a neighborhood and has its own television station. I have always known that I paid a price, professionally, for not being a member there. But, it was a price I was gladly willing to pay! Anyway, another lawyer responded by saying that if one buys into the notion that one church is as good as another, then why not belong to the one where you can make a little money? I think (hope) he was just playing devil's advocate, but the comment absolutely brought the discussion to a halt, as I suspect the rest were grappling with this uncomfortable truth. For if one church is as good as another, then you can also have a "tailgate Easter," you can streamline worship down to 30 minutes or less and you can fashion your church around your latest delusional hobby.
Posted by Terry (John) at 2:40 PM 5 comments: