Bacevich on Being Irrelevant 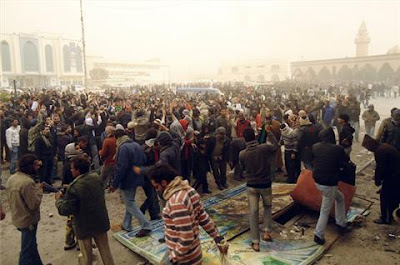 If the Muslim masses demanding political freedom and economic opportunity prevail, they will do so not thanks to but despite the United States. Yet by liberating themselves, they will also liberate us. Our misbegotten crusade to determine their destiny will finally end. In that case, we will owe them a great debt.
I have come to believe that just about every word Andrew Bacevich puts to paper is worth reading. This article is no exception.
Posted by Terry (John) at 6:01 PM 3 comments:

There'll Be No Butter in Hell!

A favorite of mine--from Cold Comfort Farm. Flora Poste accompanies her cousin Amos Starkadder to hear him preach at the Church of the Quivering Brethren.
Posted by Terry (John) at 7:25 PM 4 comments:

Met. Hilarion Speaks at Highland Park Presbyterian, Dallas TX: No One Has Ever Seen God

Met. Hilarion Speaks at Highland Park Presbyterian, Dallas TX: No One Has Ever Seen God
Posted by Terry (John) at 3:25 PM 2 comments:

The following is an excerpt from The Impasse by Fr. Touma Bitar, Abbot of the Monastery of St. Silouan the Athonite in Douma, Lebanon. I recommend the entire article posted here, on Notes on Arab Orthodoxy (h/t to Samn!) If we believe Fr. Touma to be correct, then the question for us becomes--what do we do with this?

Man’s egoism and self-love preceded his love of money. Love of money gradually progressed into a system of consumption, and the system of consumption made man a prisoner of the logic of profit. The logic of profit transformed the earth’s resources into financial calculations and financial calculations loosened the reins of the passions of soul and body. The passions of soul and body became an uncontrollable harlot and in the absence of internal restraints within people’s souls, the ladder of values and traditional moral restraints collapsed and value and morals came to be centered on purported individual freedom and man’s worship of himself. Then individual freedom and self-worship caused people’s aspirations to become greater than his environment’s capacity to pump vital capital into them and so heaven and earth could no longer match people’s wild cravings. Their storehouses started to be depleted and their balance was thrown off. The environment became ill on account of the illness of man’s heart and the unleashing of his passions beyond any limit.

And now what remains? Souls have become addicted to consumption. Man has become an instrument of consumption! Today man’s worldly identity is in what he consumes! Wills have become feeble and souls have become weak! Man has tasted this number of varieties of selfish freedom and self-worship. He no longer desires or is capable of repentance – that is, of a change of mentality and behavior. For him repentance is identical to death. For this reason he starts to live off of his fantasies, his dreams, his self-esteem, his accomplishments, and his cravings until death. He sees that he is approaching an unstable precipice and he is unable to stop before it, and he doesn’t care! He has become addicted to himself and death has become less painful than resisting his addiction. In letting loose his passions, his will to live starts to die. Death becomes life for him, and he has no other life!
Posted by Terry (John) at 7:47 PM No comments:

I really should stop reading the local newspaper as it is not good for my blood pressure. I live near the most right-wing city in the nation. (If you have other contenders, let me know and we will compare statistics.) Not surprisingly, we are also the tightest notch on the Bible Belt. This makes for some interesting submissions to the "Letters to the Editor" section on the opinion page. (When I can stand it no longer, I occasionally write to the paper myself. This amuses my friends and probably drives away potential clients.) Today's paper contains a gem of letter, where the writer addresses the apocalypse he believes would surely ensue were the health care plan to take effect. Along the way, he expounds upon compassion as he sees it, and in so doing, succinctly sums-up the Americanist religion. He writes:

Let's set the facts straight regarding Jesus' compassion while on this earth. I can't recall where Jesus said that feeding the 5,000 hungry followers was the responsibility of government, nor did He see the blind, deaf, dumb and lame as the responsibility of the taxpayers. He healed them so they could go to work and provide for themselves.

Wow. So Jesus Christ healed so that people could work hard and be self-sufficient? Wonder how the Apostles and the Church Fathers missed that insight. The sad thing is that this letter is typical of what one often hears and reads around here.
Posted by Terry (John) at 6:54 PM 5 comments:

The Teetotaler engages in a bit of exegesis on John 6:60-63, 66. He quotes from the MSGV (More Spiritual than God Version.) A sampling, below:

John 6:60-63, 66 Therefore, many of His disciples, when they heard this, said “This is a hard saying; who can uncerstand it? When Jesus knew in Himself that His disciples complained about this, He said to them, “Does this offend you?” What then if you should see the Son of Man ascend where He was before? Anyway, I was just jerkin’ around with you with that “eat my body, drink my blood” stuff. It’s all figurative. Y’all know, don’t ya, that Christianity will be all about angels’n'feelin’ good about yourself? … From that time, many of His disciples went back and walked with Him no more.

Conspiratorialists of the World, Unite! 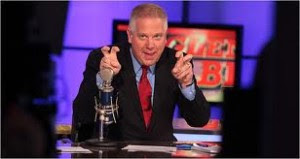 One disturbing thing I noticed when I first began to travel in Turkey was their penchant for believing the most bizarre conspiracy theories afloat. My acquaintances over there--largely intelligent, well-informed and college-educated--would nevertheless fall for any crackpot theory making the rounds. Alternative reality scenarios for 9/11 were believed almost unquestioningly. One was convinced that the Israelis were building an airbase in Kurdistan. The Armenian Genocide had become the Turkish Genocide. And I was surprised to learn that the New World was actually discovered by...the Turks. At the time, I would shake my head about this sort of thing. Well, no longer--not because they were right, but because we are just as bad. Exhibit A has to be this, the latest lesson from Glenn Beck, in which he charts the course of the coming Islamic Caliphate. That there are some Muslim extremists who dream of a restored "Caliphate" is a fact. Beck's speculations, however, are pure fantasy, perfectly attuned to a fearful audience who know little of people different from themselves.
Posted by Terry (John) at 2:44 PM 9 comments:

The Joke is on Me 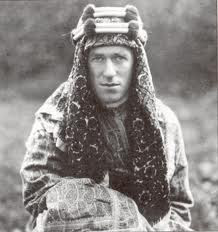 The other day my son and I were talking about books. He keeps about a dozen books going at the same time. One is T. E. Lawrence's original manuscript, The Seven Pillars of Wisdom. Yesterday, I had to be in Shreveport for the day, with several hours to kill. After pancakes at George's Grill, I found a place with a few shelves of used books for sale. I was impressed, as they had a selection of books that real readers read, not the usual fare one finds in these places. One that caught my interest was a nice hardbound, modestly-priced Revolt in the Desert, the abridged (and sanitized) version of Lawrence's The Seven Pillars of Wisdom. I already have both versions, but thought my son would like it. The previous owner, obviously a great admirer of Lawrence, had scribbled notes throughout--even outlining major points from the book. A folded article on Lawrence was stuck between the pages. I like that sort of thing. But what really caught my interest was the inscription on the frontispiece: To my good and humble friend and protege, __. ___. Muellenkamp. T. E. Lawrence. I have never been one to collect books just because they were signed by the author. (We do have a signed To Kill a Mockingbird, no mean feat considering the reclusive nature of Harper Lee. A 2005 birthday present from our son to his mother, she claims it will be what she grabs as she runs out the door if the house catches fire.) I had to realize, however, that this was a pretty incredible deal for the price. And so I walked out with it, as well as a history, The Kingdom of Armenia. And yet, in the back of my mind, something was gnawing at me. I looked at the book again, and there it was. This particular volume was published in 2004. T. E. Lawrence died in 1935. I laughed out loud at myself. I had not exactly succumbed to the spirit of greed--for I did not make the purchase based on the monetary appreciation an overlooked signed edition would have--but I would have to admit that the spirit of acquisitiveness was undoubtedly at work. We do things for funny reasons sometimes. I am glad I have the book, though, for it is a Muellenkamp. I am curious to know more of this strange man and the strange world in which he lived that would cause him to forge a signature 70 years after the author's death.
Posted by Terry (John) at 6:57 AM 3 comments: