In Praise of Declinism 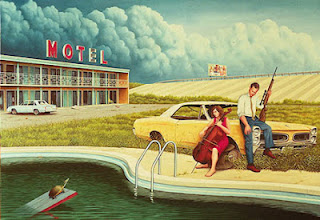 I consider myself a thorough-going declinist, which is easier than saying hell-in-a-handbasketist.  And I am quite comfortable in that worldview. To be clear, this is not at all the same thing as doom-and-gloom pessimism.  For us, the situation is hopeless, but not serious.  For them, everything is forever hopeless and serious.  The cramped and self-pitying view of these dour and sour pessimists is not for me.  Avoid such people at parties, if you can.  Dispassion and/or realism in the face of the overall fallenness of our world does not fit neatly into a binary choice between optimism and pessimism.  It does not take a particularly perceptive person to note the weariness in our sagging old Western civilization.  In the meanwhile, small kindnesses abound.  If not exactly happiness, then certainly joy can be had, which is, anyway, far better and more lasting.  Laughter, food and drink can still be shared and enjoyed around the table.  Think “Love in the Ruins.”
The confused bright-and-sunny optimists miss out on all of this, doomed as they are to live lives of perpetual disappointment.  The declinist is rarely disappointed, and certainly not when things go amiss.  He is, however, pleasantly appreciative when events (often) do not turn out as grim as was expected.  And he savors this experience to the fullest, knowing it will not last long.
The realist generally looks to the peripheral edges of both Leftist and Rightist thought for support.  We look askance at all utopian schemes--the progressive technological/capitalist fantasies of the Right, as well as the progressive social constructions on the Left.  A pox on both their houses.  The very idea of “decline” is anathema to American progressives, whether liberal or conservative, for the Left and the Right both worship at the altar of Progress; just on different days and observing different liturgies.
The Left usually rejects declinism out of hand, and when the Right does engage our civilizational collapse, it is usually some variation of the “We are Rome” argument, or the apocalyptical histrionics of the “God and Country” crowd.  Both fall far short of any meaningful assessment of our situation.
I’ve heard the “We are Rome” argument for decades, but I never really bought into the “we are just like Rome” argument.  Sure, some broad comparisons can be made between the breakdown of society in the West during late antiquity, and the fraying of Western civilization in late modernity.  Decadence is not hard to spot.  But as a historian, I was always aware of the vast dissimilarities between Rome and America.  And then again, Rome did not really “fall” in 476 A.D. did it?  As one who now often approaches things from a Byzantine perspective, I know that “Rome” lived on and prospered for almost another 1,000 years.
Maureen Mullarkey has an interesting take on this in a recent article here.  She too warns about the danger of reading ourselves into the past.  The quote sometimes attributed to Albert Schweitzer is appropriate here--”looking into the well of history and seeing only ourselves in the reflection.”  Mullarkey warns that to say “that conditions today are ‘shockingly similar’ to those in Rome at the advent of Christianity is to confuse symptoms with causes."  Nor, she says, should we “bend history to fit homiletics.”  Her conclusion is well worth noting.  Mullarkey posits that pagan Rome was, in fact, deeply religious, committed to ritual, if not dogma.  “The pagan temperament was not nihilist.  By contrast, modern man has put God out of mind...What we face today is not paganism.  It is the desolate freedom of the nihilist.” 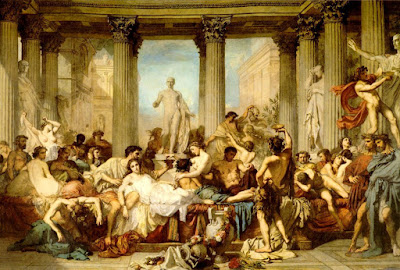 The “God and Country” crowd erroneously believe they own the “decline” argument.  Their solutions are nostalgically simple, usually involving decisions made at the ballot box or on the battlefield: If only we could go back to the Reagan years; If only we could elect a President who will appoint conservative judges; If only we could reverse Roe v. Wade.  If only. These arguments are often cast in apocalyptical terms, with the U.S. cast in the role of God's chosen people, who will face His judgment raining down on us, as in Sodom and Gomorrah, if we do not repent.  This forlorn hope, a nostalgic, nationalistic fantasized idealization of a recent past, is not realism at all, but simply utopianism of the conservative stripe.
Michael del Sapio, in a recent article has something interesting things to say about our decline.  I took note of the article because of his reference to Jacob Burckhardt, a historian I first read twenty-five years ago. Burckhardt:
I have no hope at all for the future.  I am tired of the modern world. I want to escape them all, the radicals, the communists, the industrialists, the overeducated, the fastidious…the -ists and -ers of every kind.
The author notes that “a sick, worn-out mood dominated intellectuals at the turn of the twentieth century, a feeling that the Western cultural tradition was going to seed. This is in contradiction to our often rosy view of the nineteenth century as a time of progress, relative peace, and self-confidence.”  He sees several explanations of the West’s cultural atrophy:  loss of a spiritual core, simple exhaustion from striving after progress and change--in time, “all the possibilities are exhausted,” and creativity being drained away by material comfort and opulence.
The main point of del Sapio’s article is that our decline has been in place for far longer than those who see only recent developments. And I would add that the roots of decay run so deep that they transcend traditional political remedies.


Since the late nineteenth century, each generation has managed to put enough gas in the vehicle of Western culture to keep it going. But in any decline, one eventually reaches rock bottom. The question facing us is, have we now reached it? The jadedness, ennui, and mind-numbed distraction of many modern people—a tableau of decadence mimicking The Romans of the Decadence—seems to suggest that we have. The only response to such a situation is what Jacob Burckhardt did: rediscover, hoard, and cherish the cultural treasures of our past.
As John Lukacs observed, living at the end of an age is not such a bad thing, if you are aware of it. 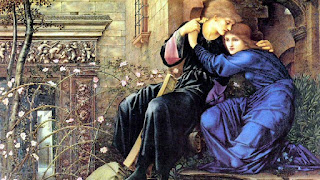