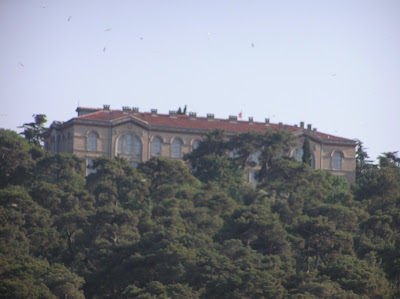 The April 17th Der Speigel interview with the Turkish Prime Minister Reycep Tayyip Erdogan, here, is instructive, though a little dated in light of events of recent days. The discussion obviously focuses on Turkey's languishing EU bid, as well as the larger role the country now plays in the Middle East.

I am not at all ill-disposed towards Mr. Erdogan. But I am disappointed, though not surprised, to read of his quite obvious prickliness and irritation when the interviewer zeroed in on Turkey's infamous "Article 301" and their ill-treatment of religious minorities. Specifically, Der Speigel grilled the Prime Minister about the confiscation of church property and the closing of the Greek Orthodox seminary at Halki. Erdogan's answers were, charitably speaking, disingenuous.

Frankly, I doubt that Germany cares a whit about Greek Orthodox seminaries in Turkey, or anywhere else, for that matter. But they are fearful and uneasy about Turkey's prospective entry into the EU. So, the Halki controversy is being used to stall the EU bid. The continued attention could cause a resolution to the impasse, in the Patriarchate's favor; or it could unleash a reaction in Turkey that would further imperil the tenuous Orthodox presence there. The picture (above) of the Halki Seminary was one I took last year as the ferry to Buyukada passed the island of Heybeliada. A portion of the interview follows:

SPIEGEL: Brussels complains that the pace of reforms in Turkey has slowed. For example, you still have the infamous Article 301, which makes the denigration of Turkishness prosecutable and limits freedom of opinion. The EU is also demanding complete freedom of religion.

Erdogan: In Turkey the religious minorities have more rights than they do in Europe. What aspect of their faith are they not allowed to live out here? Do we tear down their churches?

SPIEGEL: Churches are not allowed to own property, they are not a legal entity. Churches have been expropriated from many Christian communities.

Erdogan: We changed the construction law. Before, there were only "mosques," but now we have "places of worship." New churches are opening. We wanted to change the law on religious institutions, but the president didn't sign it. Now we're sending it through parliament again. The courts have also started to return property of minority institutions that has been seized.

SPIEGEL: Why are churches still prohibited from training their own priests? The EU has been calling for the famous Greek-Orthodox seminary on the island of Halki near Istanbul to be reopened.

Erdogan: If they don't accept us into the EU because of Halki, so be it! This is a different situation. We have problems with Turkish law in this case. It used to be a high school, but now they want to transform it into a kind of university, but the high council for universities doesn't permit this.

SPIEGEL: Why are authors still tried in Turkey under Article 301?

Erdogan: I see that you are influenced by the Turkish press! Please check how many have been sentenced under this law or are in jail.

SPIEGEL: But people have been convicted. For example, murdered journalist Hrant Dink, who had Armenian roots, was sentenced to probation

Erdogan: I met the writers who say that Article 301 must be completely eliminated. I asked them: Do you want to make it easier to decry the state, the parliament or the prime minister? I am saying yes to criticism, but no to insults. There are similar laws in Europe -- but for us it is about Turkishness, and for you it is about the German nation.

SPIEGEL: But we are protecting the state, there is no protection for "Germanness." So you don't want to change 301?

Erdogan: I don't think it should fall completely. The article also protects the right to criticize.
Posted by Terry (John) at 7:16 PM