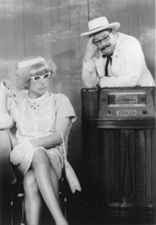 My previous post of Joel Osteen was creeping-out some people (myself included), and I received a request to replace it with someone less objectionable. Staying within the realm of religious charlatans, I chose the Reverend Spikes, shown here with Vera Carp, of Greater Tuna fame.

If you are unfamiliar with the Osteenian eloquence of Reverend Spikes, I submit the following, his eulogy of Judge Roscoe Buckner of Tuna, Texas:

I just wanna say, I say I just wanna say a few words, a few words about a friend of mine and a friend of Tuna’s. Roscoe Buckner spent his whole life in service to his community, his country and his Lord. And we’re sure that when the roll is called up yonder, he’ll be there. He was a judge who made hay while the sun shined, but always, I say always let a smile be his umbrella. He always kept his sunny side up and always saw the silver lining behind every cloud. A judge who took no wooden nickels nor threw caution to the wind, but looked before he leapt and never got in over his head. No, he kept his head, when all about him were losin’ theirs and blaming it on him. He kept a stiff upper lip and his nose to the wheel. About this man, we can truly say, he was one of a kind, a jolly good fellow, which nobody can deny. He was one for all and all for one, and to his own self be true. And I can tell you this, he did it his way. He was a serious-minded judge, and let bygones be bygones, but remembered the Alamo. About this man, we can truly say, he was the cream in Tuna’s coffee. He fought fire with fire, and kept the home fires burning. And when he couldn’t stand the heat, he got out of the kitchen. He would walk that extra mile, he would walk it softly and carry a big stick. He was a Pepper, a man’s man, early to bed, early to rise. He laid his cards on the table, gathered at the river, and brought in the sheaves. Hunger was his best pickle. He was a judge who wouldn’t fire until he saw the whites of their eyes, but whistled a happy little tune, praised God, and passed that ammunition. For he had not yet begun to fight. For never ever ever did I hear the man say die…he just did. He was a fine upstanding civil servant, who practiced what he preached, put his best foot forward and his money where his mouth was. And when the going got tough, he was gone…It’s not easy to find words to describe such a man. We commend his soul to you, Lord. I, the Reverend Spikes, recommend him. Amen, Lord. Amen.
Posted by Terry (John) at 6:54 AM

You could say something about Reverend Ike, or my all-time favorite TV preacher, the late euGENE SCOTT. :^)