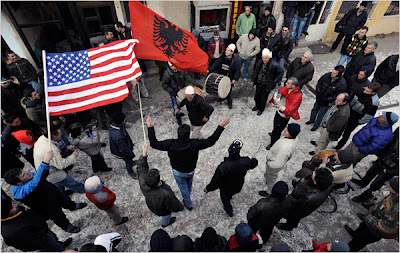 Well, we knew it was coming. Kosovo has declared independence, with celebrations in Pristina. This is largely a situation of our making. The crowds in the street are waving American flags, alongside their Kosovo flags. They are also carrying signs saying "Thank you, America," and holding up pictures of Bill Clinton.

It seems increasingly obvious that the chances for a Clintonian Restoration are slipping away, and with it, the hope of solidifying and confirming their place in history. Future scholars will give the Clinton years a mixed review, at best. With no second Clinton administration, there will be no "Clinton era" for the history books. But Bill Clinton does have a legacy--if you want to call it that--and it is Kosovo.

Western Europe and the U.S. will fall into line recognizing the new state. Serbia and Russia will protest indignantly, but in the end, nothing much can be done. It will be interesting to see how quickly the "Kosovo principal" will be utilized by each and every separatist group in the world--many of which are uncomfortably close to western Europe and, I might add, the U.S. And when this happens, those of us who love irony can at least relish the sight of Western Europe and the U.S. preaching against the very same medicine they prescribed for Serbia.