The Texas Firewall Primary and Beyond 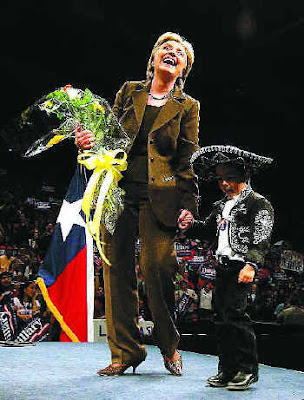 As I was scanning the local paper this morning, I came across a short announcement (warning?) that on the morrow, former President Bill Clinton will be traveling through our part of the state, stopping even here, in the reddest county of a cat-house red state.


So it has come to this. The Clinton candidacy is in such dire straits that President Clinton is being dispatched to behind the Pine Curtain, to stir up what votes can be had in East Texas. Meanwhile, Mrs. Clinton, or as the television ads call her, Nuestra Amiga, is camping out in South Texas, an area we now learn is her "second home."


We Texans are not averse to attention, but we never thought that our March 4th primary would amount to anything. Now it turns out that we, more specifically our Latinos and white women, are to be Mrs. Clinton's firewall. Well...maybe not. It appears to me that Mrs. Clinton has been swimming against the tide of history for some time now, and I am afraid the waves are about to wash over her. First, Obama seems to have closed the white-woman-voter-gap in the Virginia primary. Second, much is made of her strength in the Latino community, which certainly cannot be discounted. But Texas is not California. Our Hispanic population is long-established and much more integrated, in my view, than in California. Texas (Tejas, if you will) started off Hispanic, and that influence has remained an element of our culture, from the very beginning. The Rio Grande Valley has always been integrated economically and culturally with northern Mexico. When we drive down to the shopping outlet malls between San Antonio and Austin, we meet Mexican shoppers who drive up from Monterey. Our border has always been porous. And the Hispanic voter in Texas is more independent, much less susceptible to control by party bosses. Generalizations made about the Valley simply do not necessarily hold for San Antonio, Houston, Dallas and Austin. 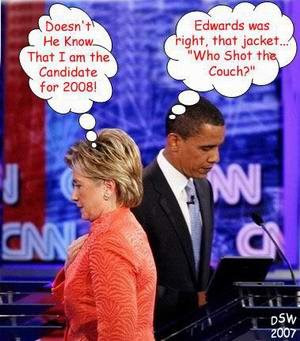 So, Mrs. Clinton may very well carry Texas, but if so, it won't be by much. And in the current dynamics, it won't be enough.


Last weekend, in the nearby Starbucks, 10 or 12 of us were gathered around, having a free-wheeling pontification on what has to be the most exciting political season in almost 50 years. I was struck by several currents of thought. First, there is the ever-present Clinton loathing among some. It is visceral, emotional and irrational. One can certainly make a legitimate case, based on the issues, to be against Mrs. Clinton. But this opposition seems purely personal. To one of this mindset, it is inconceivable that the nation could ever elect Hillary Clinton (a fact I dispute). Some of us tried to suggest that our city is not even representative of Texas, much less the rest of the country. But they were having none of it, provincialism being a tough nut to crack. And yet, these same people were ambivalence towards Barack Obama, who is arguably more liberal than Mrs. Clinton. Some still do not think he can win the nomination--or better put, they don't see how Mrs. Clinton will not win the nomination (another fact I dispute--see above). I observed no hand-wringing over the prospect of an Obama administration. Next, everyone was underwhelmed by McCain--no discernable enthusiam. Finally, I observed an undercurrent that cut across the group--Republicans, Democrats and independents--that is, the desire to punish the current Bush administration. A discussion of the Bush-Cheney years leaves even the rock-ribbed Republicans sputtering and cussing. These observations are obviously just anecdotal. A roundtable discussion at a coffee shop in a medium-sized city in East Texas may mean something. Or it may mean nothing at all.


While I am enjoying the twists and turns of the political season (a guilty pleasure), the end game is not hard to figure out. Here is how I see it:


First, start with these 3 truisms:

Now, let's do the math. Take a yellow tablet. Draw a line down the middle, making 2 columns. On the left hand column, label it "States that voted Democratic in 2000 and 2004 that are now trending Republican." Go ahead, take you time. Now, on the other column, label it "States that voted Republican in 2000 and 2004 that are now trending Democratic." Use the second page if you have to. You get my point. By all means, enjoy the show, but I have just given away the ending.

Thanks for the thoughts from a local.

I too, though from a much greater distance, am enjoying watching the ins and outs of your election [I do not know how you all cope with such a long election lead-up. I'm done after the 5 or 6 week ones here!]. It looks, as this is only my guess from what I hear / read, that, like here for our last election, a feeling of change, perhaps even great change, is in the air.

Here's a Republican who is enthusiastic about McCain. But you've got an excellent point, that we can't tell from the primaries which voters will turn out in November. From what I've seen reported on the news channels, the Democrats have had much greater turnout in most states.

The question to be answered is this: does Barack Obama have any specific plan to govern? Platitudes, sure, but talk is cheap. What, specifically, does he intend to do and how will he do it?

Now, I think many of the Republicans (like myself) who are so mad at Bush (very very mad) are upset because he has spent money faster than a drunken sailor. The Dems have promised to expand government and to raise taxes. I think many Americans will think this is the wrong direction for the country. We need to reign in spending, not expand it.

Finally, as to Iraq, while many people, including me, believe we were wrong to invade, I don't think the majority of Americans want to see us pull out abruptly, as Obama promises to do. We made this mess, we need to clean it up. Nobody objects to our continued presence in South Korea, which has lasted more that 50 years. Iraq should be viewed the same way. This is especially important since we could easily lose our bases in Turkey.

Ian, it is way tooo long. For a November election, we should be in this stage about midsummer, at the earliest. I agree, great change is in the air.

Kirk, re: Obama, "What, specifically, does he intend to do and how will he do it?" Do you REALLY want to know? Ha!

Great thoughts on the state of politics in our country. I enjoy your blog a lot!