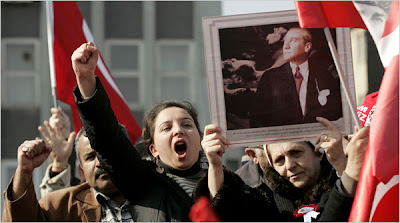 I haven't blogged about Turkey in quite some time now, but I have continued to follow events there. Apparently, the "head scarf issue" is still roiling the country. Parliament recently took a step towards lifting the ban on women's head scarves at Turkish universities. Secular Turks are up in arms over the move. As one secular legislator charged, "It will ultimately bring us Hezbollah terror, Alqaeda terror and fundamentalism." Well, this is the sort of hysterical, overblown rhetoric that one would expect from the likes of say...Mitt Romney. But considering Turkey's neighborhood, such concerns are somewhat more understandable. One commentator feared that "it is going to evolve into a ban on uncovered hair."

But such a take on events may be a misreading of what is actually happening. The issue "pits a rising, increasingly wealthy middle class of observant Turks, on one side, against a secular elite, backed by the military and the judiciary, on the other." One scholar concludes, "it's all about power....it's about who gets to decide what Turkey's image and emblematic lifestyle will be. Islam is the lightning rod for all the fears and concerns."

Turkey's booming economy is a great equalizer. On the streets of Istanbul, young women in heans, stylish T-shirts and Keds wear head scarves of all colors. Young observant women are more integrated than ever.

My response is somewhat counterintuitive to the response I would have tend to have in other parts of the Muslim world. For the secularist tradition in Turkey cannot be divorced from Turkish ultra-nationalist. And it is this virulent nationalism that has been most repressive of the Christian minority there. The voices of moderation and tolerance (such as they are), come more from the so-called Islamist parties.

I recall a conversation I had with my friend, Hakan, on my last visit to Istanbul. We were sitting at a small restaurant--4 tables set out in the cobblestone street, for there was no sidewalk--savoring a meal of fish, mezes, melon, flatbread and, of course, raki. I was making the observation that I noticed far fewer head scarves then (June 2007) than I had in 2003 and 2004. I wondered if the whole head scarf thing had been more of a political statement than anything else, and now that Erdogan's party had carried the day and they were in power, there was no longer a need for the "statement." He said that that was exactly the case. For people like Hakan, thoroughly Western in orientation, the AKP party was simply the party of good government and the rising middle class.

I have commented before that I believe Turkey will remain solidly Muslim in character. And it may take its eyes off the West, somewhat, to gaze eastward at their historic Turkic homeland. But they are not looking south, to Mecca.