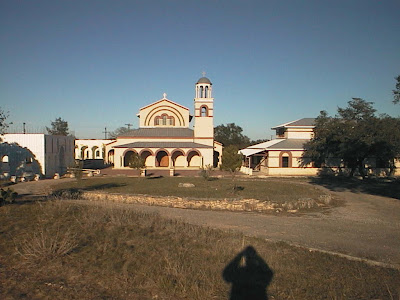 This subject may seem an odd choice for my last observation in this series. But the Texas Hill Country is also home to Holy Archangels Greek Orthodox Monastery, located between Kendalia and Twin Sisters (or between Blanco and Boerne, to put it in a slightly larger context). Going to monasteries is what Orthodox people do. I am no exception.

The monastery occupies 155 acres at the end of a dead-end road. Frankly, it took me a while to track it down. Holy Archangels is one of the 15 monasteries founded across America by Elder Ephraim, and has been in existence for about 10 years. As I understand it, there are presently 3 priest and 7 monks in residence. A number of Orthodox faithful come for services on the weekend, and the homes along the little road leading to the monastery are lined with the vacation and/or weekend homes of Orthodox who wish to be close by.
I inquired about the metal framework for a large dome that I saw lying on the ground behind some building supplies. The monk informed me that the property had been previously owned by a Muslim group who had a mosque here, and that was their dome. So, he concluded, it was a double blessing: a mosque was destroyed and a monastery established. At the risk of engaging in a brief moment of triumphalism, I couldn’t help but agree.

The church at Holy Archangels is simply beautiful, the intricately carved iconostasis (made in Greece) is as impressive as any I have seen. A large amount of construction is underway at the monastery. A 3-story dormitory is being built around the church, large enough to accommodate 100 monks, as well as providing for an iconography studio and other needs.

All in all, I was impressed. The monks are unfailingly friendly and hospitable. I have seen discussions among Orthodox bloggers, with various insights pro and con about the role of monasteries in American Orthodoxy, and their influence in Orthodoxy in general. Some may believe that these monasteries perpetuate a perceived Orthodox “exoticism,” and worry that Orthodoxy will never really fit in, so to speak, to American society. God grant that we never “fit in.” Our country is saturated with that "fit-in" style of religion. But really—and I hope I am not setting up a straw man, here—I think this argument approaches the issue from the wrong angle. I view these monasteries as healthy, and while they are certainly a new addition to the landscape that doesn’t mean that do not belong here. We are a mongrel, polygot nation. We are, and have always been, in the process of becoming. I recall a magazine cover from several years back with an artist’s conception of what the average American would look like in the year 2050. And unless you are already part Caucasian, part black, part Asian and part Hispanic, then this average future American will not look like you, or like me. That is our future, as a nation. And in this particular part of the world, any concern about Orthodox "exoticism" just falls flat. We WASPs have only been here 160 years, hardy long enough to make an indelible stamp; and even from the beginning, heavily diluted with German Lutheranism and Hispanic Catholicism. The monks in their black cassocks, going about their work and worship at Holy Archangels Monastery look as natural in this rugged hill country as anybody else who has come along. In fact, maybe more so. The region has just a hint of Greece to it.
Posted by Terry (John) at 11:03 AM

That's beautiful. Thank you for taking me on this virtual pilgrimage.

Just wanted you to know how much I enjoyed this series of wonderful, beautiful meditations. I know next to nothing about Texas, much less the Texas Hill Country. Thanks for giving us such your personal tour.