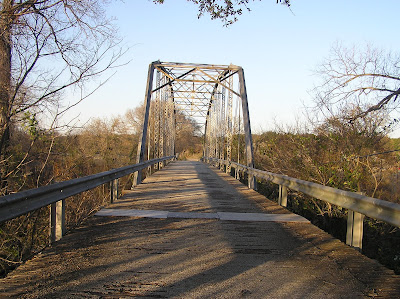 Much of my family story played itself out along the Lampasas River of central Texas. The area remains somewhat remote, but with relentless sprawl marching north from Austin, and a smaller version of the same moving south from Fort Hood, the rural nature of this part of the world will ultimately give way. But for a while yet, progress is at bay. In all my returning, I try to visit 3 touchstones: the bridge, the road and the grove.

The old iron bridge over the Lampasas River was brand new in 1914, the year of my father’s birth. I have crossed the rattlely old bridge dozens of times in my life. In recent years, it has been closed to vehicular traffic as a new, low concrete replacement has been opened downstream. At some point, a do-gooding entity of some sort will undoubtedly declare the old bridge to be unsafe, and recommend that it be dismantled. But until then, I retain this link with our past.

It has even gained a bit of fame in its last days. The movie “Second Hand Lions,” starring Robert Duvall and Michael Caine, was shot on location in central Texas. The 2 bridge scenes in the move were shot here. The background scenery was digitally altered, but there is no mistaking the bridge.

My great-grandparents’ farm lay about 1 ½ miles north of the community which was clustered on either side of the bridge. My dad was born in the village and lived there until he was about 6. He was a natural horseman, even as a child. By the time he was 5 years old, my grandparents would set him atop old Star--their gentle mare--and point her in the direction of the general store. There would invariably be a cluster of men gathered around in front of the store, located just north of the bridge. One of them would go in, get the family’s mail, hand it to my dad, and then he would head the horse toward home. The community cemetery (perhaps one of the most beautiful in Texas), lies just south of the bridge. My great-grandparents are here, lying beneath massive Woodmen of the World grave monuments. The old Baptist Church is a little west of here, though now a non-denominational something or the other. In my dad’s youth, there would have undoubtedly been a Presbyterian Church somewhere in the area.

The Lampasas River is not much of a river, actually. The banks are high and wide, but the river is sometimes shallow enough that one could walk across without getting unduly wet. A huge sandbar hugs the south bank, just east of the bridge. This, more than anyplace else, served as a community center for the now vanished village. Large enough to accommodate quite a crowd, the sandbar provided the perfect venue for picnicking, swimming, wading, and perhaps some low-key fishing. The rocky bluffs above were also popular. Granddad’s two sisters came of age in the Edwardian era. I recall the faded old hardback pictures—they, with hair piled high beneath wide-brimmed hats, posing with the other area young people on the bluffs.
My dad remembers one gathering from about 1919 or 1920 in particular. Grandmother’s mother, Nannie, and her two other daughters had just returned home from Dallas. I have always been incredulous that Nannie ever lived in that city, for she was notoriously old-fashioned, even then. They had left the Hill Country after the debacle of my youngest great-aunt’s rather thrown-together marriage. The baby died and the husband bolted. The whole saga was a little scandalous for that day and time, and so they decamped for the anonymity of the city for a while. My aunt would recover. She would marry again. And again. And again. But at that time, friends and family were just glad to have them back where they belonged. As my dad recalled, everyone was down on the sandbar. His younger brother (not much past toddler stage) had captured a horned-toad that he was carrying around in a shoe box. He was chasing his aunt, both of them running barefoot across the sandbar. My great-aunt was something of a tomboy and hardly afraid of a horned-toad. But she was glad to play along with her nephew. Standing on the old bridge, looking down, I can just about see it all, in my mind’s eye.
Posted by Terry (John) at 12:25 PM