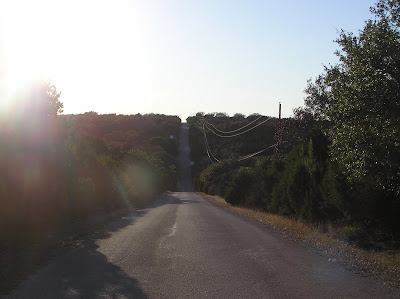 My grandmother’s people lived across the river from my granddad’s farm. Though only a few miles apart, as the crow files, the road twists for 7 or 8 miles around the rugged, hilly terrain to connect the two communities. Other than paving, the road has changed little since my dad’s youth. I rarely drive it without seeing deer or turkey. As one travels south, the road unwinds into a long straight-of-way, stretching nearly a mile from one hilltop to the next. This is known as “Seven-Mile Hill,” though I am unsure of which of the two peaks is so named. This stretch of road is the setting for one of my dad’s favorite stories. Whenever he would begin the story, my mother would always roll her eyes and claim that it “grew” with each telling; much the same way my wife does when I tell it. For it was on this stretch of road, in the summer of 1919, that my dad saw his first automobile.

My granddad was very much the stereotypical old-time Texan. Dark-complected and square-jawed, he stood 6’ 4” in his stocking feet. With boots and Stetson, he seemed 7’ tall. He died when I was 8 years old and he has been my life-long hero. My granddad and his mother-in-law never quite got on, as they say. Nannie was so tiny that she wore a hatband as a belt. She stood 4’ 8” and never weighed over 90 lbs. She kept her hair pulled back tight and wore spectacles over huge, piercing eyes. This gave her a something of a hen-like appearance, and in fact, she looked much like an even tinier version of Granny Clampitt from the “Beverly Hillbillies.” Nannie had been widowed when only in her mid twenties, and never remarried over the course of her long life. And she was tough as a boot. She and my grandfather were evenly matched.

Nannie was not above using a little maternal manipulation. Her three daughters were overly protective of her, and I suppose that they somewhat “petted” her. If things were not particularly going her way, she could pout and throw a "Smith fit," as my grandfather later dubbed it. She imagined herself subject to "heart flutters,” as she put it, particularly in those times when she needed to get her way. The “heart flutters” did, in fact, finally carry her off, but at age 84. My grandmother loved her mother, but she also loved my granddad. They married when she was 19 and he 24, and she left home in a sense that her 2 sisters never did. I suspect Nannie somewhat resented my granddad for taking her oldest daughter away. He, on the other hand, had little patience with her carryings-on. And herein lay the root of their low-level war of wills.

Nannie would come for extended visits. My dad recalled that once, in the midst of a “Smith fit,” she exclaimed, “Well, I’ll just kill myself.” My granddad coolly replied “Well Lizzie, the strychnine is on the mantle, next to the clock. But if you take it, make sure you take enough because if you don’t, it will just make you sick.” Such was the nature of their relationship.

And so on that summer day in 1919, my granddad was carrying Nannie back home. It was a family affair. My granddad was driving the team with my grandmother sitting next to him, holding the baby. My dad, his older brother and his next youngest brother were sitting on the back of the wagon, their bare feet hanging off. And in the bed of the wagon, in a cane chair, sat Nannie. They were nearing her home, when they topped Seven-Mile Hill. In the distance, on the far summit, an automobile was chugging their way. The boys were craning their necks to get a better view of the approaching vehicle. Meanwhile, my grandmother began to admonish her husband to stop and hold the team until the vehicle passed. He, like most of my gender, took a dim view of such sensible instructions. My granddad just keep on his way, as the dust and noise from the car came closer and closer. Sure enough, right before the two travelers met, the jittery horses spooked and reared straight-up. Grandmother clutched the baby and screamed. My dad and his brothers were yelling with excitement, while my granddad was attempting to bring the team back under control. In this midst of this commotion, Nannie’s eyes got “big as sauces,” and without a word, she leapt over the wagon wheel and landed in a bar-ditch. My grandmother turned to my granddad and said, “Now look what you’ve done. You’ve gone and hurt Mother!” It would take more than a tumble in a bar-ditch to do serious harm to Nannie, but I suspect my granddad never heard the end of it;, from either his spouse or his mother-in-law.
Posted by Terry (John) at 11:02 AM

I can't remember who first told me this story, Dad or Poppa. However, I do remember it always being told with a smile and vigor.