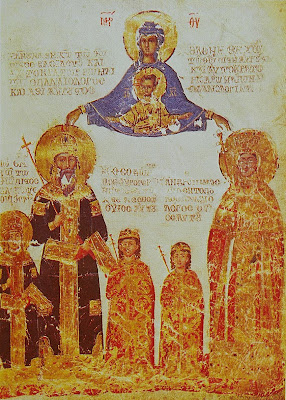 I have not bought any books in some time now. With the new economic realities of this past year, I thought it best to use a little discipline with this particular passion. Obviously, I haven't stopped reading, but have made a conscious decision to first read those books I already own. I was beginning to feel guilty about the teetering stacks on the book table next to my reading chair. I do not put a book on the shelf until I have read it, or at last as much of it as I am going to read. So, I have been whittling on the stacks, and now have them down to a more manageable level.

In so doing, I finally finished Judith Herrin's Byzantium: the Surprising Life of a Medieval Empire. I highly recommend the work. The book is arranged topically, and is accessible to the general reader, as well as containing enough meat for the more advanced Byzantinist.

The area of Byzantine studies has made great strides since the middle part of the 20th-century. The old stereotypes are falling away, and the civilization is increasingly seen in a new light, both among the general public and academics alike. The author seeks to counter any lingering misconceptions about the Empire among her peers. In her concluding chapter, Herrin chronicles the growth of prejudice against Constantinople in medieval Europe, and how this led to the prejudicial views of Gibbon and other 18th and 19th-century historians.

The initial animosity grew, it would seem, out of simple envy and jealousy. Theophano, a 10th-century Byzantine princess, was married off to the German Otto II. Her arrival on the Rhine created quite a stir. Dressed in silks, she insisted on bathing daily, was quite literate, and most upsetting of all, she used a fork. Outside of the particular dogmatic differences between Constantinople and Rome, the Byzantines soon became stereotyped as decadent, effete, cowardly and sly. Herrin rebuts each of these charges. While certainly a city of unimaginable wealth, the metropolis was just as well known for its piety and charity, with safeguards in place for the poor. Rather, than being effete, Constantinopolitans were simply the most educated populace before modern times. Herrin shows that the charges of military cowardice and diplomatic connivance nothing more than a deep-seated aversion to warfare, based on the spiritual underpinnings of the Empire. Wars were to be defensive, and only after diplomatic efforts were exhausted. These attributes--their aversion to war, their charity and their educational system--are those that set the East Romans apart from their neighbors, and the ones that provide the greatest examples for our age.

This is one of the most surprising things I discovered in writing this book. I fully expected that Constantinople itself would play a central role, as a fabulous and exceptional city with its buildings and its trade. What I had not expected was how often I would be recording the compelling inventiveness and novelty of the broader aspects of Byzantine civilisation, from its government and religion to its military and intellectual skills. It had the ability to develop a secret, sea-borne explosive artillery and keep the secret for centuries. It could generate and survive a profoundly divisive argument over the role of icons, identity and religious belief. When Latin Christendom and the Muslim East insisted on keeping the Holy Book in its sacred languages of Latin and Arabic, Byzantium had the audacity to translate the Greek Bible into a written language which its own scholars had invented in order to facilitate the conversion of the Slavs. It had the discipline to mint and maintain a stable coinage for over seven hundred years. It had the ingenuity to develop royal forms of power while maintaining Roman administration. Time and again, the extraordinary combination of Roman, pagan, Christian and Greek inheritances gave it the capacity to recover from adversities rather than to disappear, leaving only a trace of its achievements. The Byzantium that gainsays the generally accepted stereotype is this lively, inventive society, passionately believing in itself.

...we should be aware of Byzantium's exceptionally persistent, skilled fusion of traditions and inheritance, and how it created a varied and self-confident civilisation that grew as often as it lost ground and fought to the end to survive. It is astounding that Byzantium continued after 1204, when the West captured and occupied its capital for fifty-seven years, even if the mini-empires which sprang to life in its place were not truly imperial states. Something of that same combination of resources--classical, pagan, Christian, eastern and western--was in the founding DNA of Byzantium, and provided a reliably constant life force across the centuries....My aim is to expand, however, slightly, our knowledge and experience of others, and to glimpse how people of a cosmopolitan, city-based society, with a consciously historical belief in who they were, as well as a pious belief in the hereafter, could be so different from ourselves and yet so recognizably like us.

A picture in the book shows a 12th-century fresco depicting the Last Supper, found on the wall of the Kanakli Kilise, one of the Cappadocian cave churches. Herrin included the photo, at least in part, to illustrate her use of the fork as a symbol of Byzantine cultural distinctiveness against the West. In the upper left hand side of the table--sure enough--lay a two-pronged fork. I visited this church in 2007, but overlooked this detail. I went back and checked my photos, but apparently I had not taken one. While in the area, however, I did stay in a cave hotel. The upper level contained the ruins of an old church. A couple of frescoes had been repainted, no doubt as a draw for the hotel. One of the frescoes was an exact copy of the one shown in Herrin's book, and indeed, there was fork on the upper left hand side of the table (shown below). 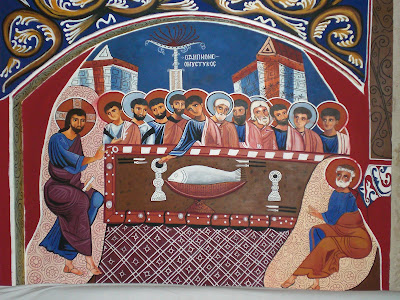 Sounds fascinating: thanks for the review.

Another book to add to my "to read" list.

I own, and love, J.J. Norwich's Byzantium trilogy from the late 80s and early 90s. I've read the whole thing through a couple of times. Have you read it? If so, how would you compare it to Herrin's work?

BJohnD,
I like Norwich as well. Herrin's work is not a narrative like Norwich's. Even though there is a sense that you are moving through the centuries as you read, her work is topical, and not strictly chronological. It is like reading the lecture notes of a really interesting college professor. And in that respect, his account is geared more to the general reader, with Herrin's being a bit more professorial. Both are excellent in their own way.

Thanks. Actually, that makes me more interested in reading Herrin's work, as it wouldn't be just another version of the same story.