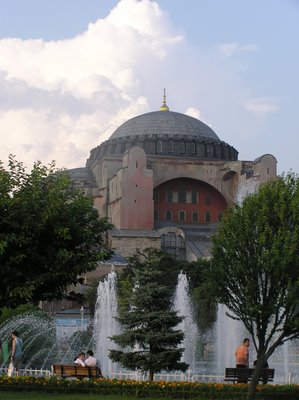 Rod Dreher has a timely article in today's Dallas Morning News, concerning Pope Bendict XVI's visit in Istanbul. Dreher hits on a number of issues of great interest to me: Turkey and its relationship to Europe, the plight of the Orthodox in Turkey (and all Christians, for that matter), Turkish nationalism, Armenian Genocide denial, and Catholic-Orthodox dialogue. He suggests that while the media will be focused on Benedict and his prickly relationship with the Islamic community, the real story will be his meeting with Ecumenical Patriarch Bartholomew. Dreher recounts a recent conversation with an Orthodox priest who laments that "the entire Byzantine Empire has been reduced to the Phanar." Would that it were so. Actually, the Orthodox Patriachate is hemmed into part of a block, with a mere handful of Greek shops on the adjoining street corner. The Phanar district has been almost completely taken over by the most conservative Islamic immigrants from eastern Turkey. If you want to see black burkhas in Istanbul, then go to the Phanar. But this is just symptomatic of the precarious plight endured by the few remaining Orthodox Christians in Constantinople. Dreher writes:
Few in the West gave a thought to Byzantium until Benedict cited in September Emperor Manuel II Paleologus in a controversial address that set off Muslim mobs in yet another spasm of inflamed sensitivity. Benedict's speech--both its content and the Islamic reaction--brought to mind the fact many Western elites take pains to avoid noticing: that down through the ages, the meeting between Islam and Christianity has been a mostly unhappy one. This is certainly true from the point of view of Eastern Christians--Orthodox, Coptic and otherwise--wh have suffered for many centuries under the Muslim yoke.
Well put, particularly the reference to our Western elites. Dreher comments on the age-old grievances between Eastern and Western Christianity, but concludes that "the hour is late indeed for the Orthodox to dwell on this history, as a resurgent Islam pushes what is left of Christianity in Muslim lands further to the brink of extinction." He also believes that "Benedict has a clearer eye about Islam than his predecessor... [and] he is not prepared to pretend that it is of no matter that in Europe Muslims are free to worship as they please and to build mosques at will, while in Turkey and the Muslim world, Christians are generally not permitted to build churches and face state-sanctioned discrimination. It is better, says Benedict, to speak frankly about the world as it is, rather than about the world Western elites wish we lived in." Lastly, Dreher believes that "it is in the interest of both Catholic and Orthodox believers to achieve whatever effective spiritual unity they can manage. History is on the move again, and not in their direction." Good thoughts, all around.
(The picture is of the Haghia Sophia the last time I was there, I taking special pains to find a view that clipped off the 4 minarets.)
Posted by Terry (John) at 3:04 PM

Now just photoshop a cross onto the top and it is almost complete. It would have been so nice to see her when she was still ours.

Oh yeah. I think that the "restoration" at Haghia Sophia is now complete. From my point of view, if they were really interested in restoration, they would take down those 4 godawful 19th-century medallions from inside; not to mention the 4 minarets! What you see on the top of the Haghia Sophia is a bright, shiny new Islamic crescent, and is about as tacky looking as you can imagine. Apparently the fact that the HS was a church for over 1,000 years before it was a mosque for less than 500 years was not much of an consideration in the "restoration."

What a beautiful, beautiful view without the minarets.
Best,
michaelk borussia

I agree, the photo is beautiful, good job on the angle, and your words are well said.

Though my friend found the picture related to this wonderful meeting "overly devotional," I found it deeply moving:

Yes, the picture is deeply moving. And speaking of being moving, check out the account of the Liturgy at http://www.popeandpatriarch.com/?q=node/96

There is also a more natural picture of Pope and Patriarch at the end of same.