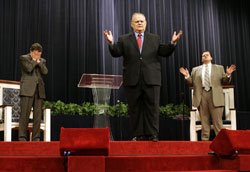 I have tried to refrain from commenting on this year's political campaigning. I saw no need to join the chorus predicting a well-deserved drubbing for the GOP. But then, there is always Texas. Our gubernatorial race has generated a bit of interest. Rick Perry, the current occupant, is a former Texas A & M cheerleader who moved up from Lt. Governor when W moved into the White House. He served out the remainder of that term and was reelected in his own right in 2002. Although popular with the Texas business establishment and GOP activists, his statewide ratings are abysmal--and rightfully so. The irony is that if Perry is re-elected and serves out this term (as seems likely), the most mediocre governor in memory will be the longest serving governor in Texas history.

Sensing that Perry had a lock on the Republican base, Texas' political gadfly, the much-married Carole Keeton McClellan Rylander Strayhorn, opted out of the Republican primary and challenged Perry as an independent. She shares the moderate anti-Perry disgust vote with another independent: singer-songwriter-author-animal rights activist Kinky Friedman. Kinky initially grabbed the spotlight with campaign slogans such as "How Hard Could it Be?" and "Why the Hell Not?" Although still wildly popular on the Letterman show, his campaign has stumbled somewhat in Texas. And then there's the Democratic candidate, somebody Bell, I think. As it stands, the lackluster Perry will win another term with something over 30% of the vote.

Oh well, the state that foisted LBJ on an unsuspecting nation can hardly complain much about a piker like Perry. And then he does this. With the election absolutely sown up, Perry decides to throw a little red meat to his God-and-County constituency. He, along with some 60 odd Republican candidates, prostitute themselves before a get-out-the-vote worship(?) service at the Cornerstone Church in San Antonio. [Does this many Republicans on the dais at one time raise any red flags about the church's tax exempt status?] You may not be familiar with the Cornerstone Church by name, but have probably seen it on television, as this is the megachurch of that bumble-butt televangelist, John Hagee.

Hagee, once he got wound up, declared that "if you live your life and don't confess your sins to God almighty through the authority of Christ and his blood, I'm going to say this very plainly, you're going straight to hell with a nonstop ticket." After the event, a reporter asked Governor Perry if he agreed that non-Christians were going to hell. Perry, a graduate of the George Allen School of Political Suavity, responded: "In my faith, that's what it says, and I'm a believer of that."

His opponents were quick to respond. Friedman, a Jew who often describes himself as a "Judeo-Christian," noted that Perry "doesn't think very differently from the Taliban, does he?" and that Perry's comment "hits pretty close to home." Meanwhile, Keeton McClellan Rylander Strayhorn, trolling for votes in the black Baptist churches of Ft. Worth, tried to match Perry in cringe-inducing commentary: "There are many ways to heaven. We're all sinners, and we're all God's children...God's a uniter." [Carole might need to refresh her reading of Luke 15:49-53]. The Democratic candidate noted that "God is the only one who can make the decision as to who gets into the kingdom of heaven." I am reminded of an observation I once made about Protestantism being all about status: who is in and who is out.

The picture at the top of the article says it all. Hagee, Sr. is front and center. Hagee, Jr. is to the right [Why am I reminded of Governor O'Daniel and son from O Brother, Where Art Thou?] Our governor is on the left, with his hands covering his face. I'm ashamed too, Governor.
Posted by Terry (John) at 9:45 AM

"The picture at the top of the article says it all. Hagee, Sr. is front and center. Hagee, Jr. is to the right [Why am I reminded of Governor O'Daniel and son from O Brother, Where Art Thou?] Our governor is on the left, with his hands covering his face. I'm ashamed too, Governor."

They look even more like the O BROTHER father and son when watching them live on TV.

Oh, absolutely! They've just got to make a movie about this guy while Charles Durning is still living. (John Goodman could also pull it off.)

I've heard one of your commercials - the liberal man one - I'd drive off the road in a road rage event, sad to say.

Mimi, I suppose it is bad all over - but Texas seems to be in a class by itself.

Texas seems to be in a class by itself.


I've never been there, but that is certainly how it appears from here!