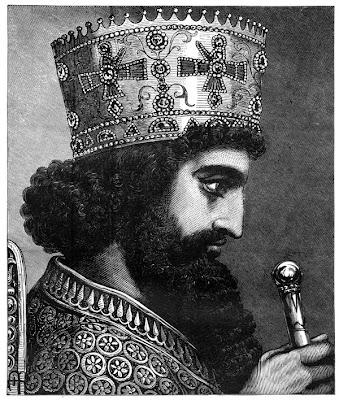 .
My voting is never driven by domestic "issues." We have an entrenched, self-perpetuating Establish- ment Party that is both Democratic and Republican. In terms of foreign policy, however, there can be real differences, and oppor- tunities to inflict damage that will last for generations. One example of what.should.not.be.done. is the advice of Sen. Lindsay Graham (Rep. SC), here, who suggests that if push comes to shove, we "neuter" Iran. As Reza Aslan observed, "this isn't Iraq, this isn't Afghanistan...some sort of fake country put together." He's right. This is Persia, with a 3,000 year-old civilization behind it.
Posted by Terry (John) at 1:14 PM

Think you're right: Someone needs to read up on Darius and the Persian Boys BEFORE we rile them up. Not just a civilization with 3,000 year-old history... but with a bit of a "sketchy" twist.

You simply don't understand the thinking of great men like Graham. His grand plan is to dilute the effects of defeat. If we attack Iran we will be bogged down in three rather than two unwinable wars, in which case the effects of any one of these wars will only be one third rather than half as strong as if we were only bogged down in one. See? That's strategic thinking on a grand scale.

JtT,
I know what you mean. The hubris behind such assumptions just takes my breath away. They see Iran as some sort of goofy, oddball country that can be “handled,” or in this case “neutered.” A little historical context here would serve our leaders well. These were the people with their armies on the shores of Greece in the 4th-Century BC. These were the people that sacked Jerusalem in the early 7th-Century AD. I have seen the stacked skulls of the monks killed by the Persians at Mar Sabbas Monastery. The only reason Mohammed was able to create his Islamic empire in the mid 7th-Century was that the Byzantines had just—finally—defeated the Persians, leaving both these major powers spent and exhausted. I have stood on the ridge at Davit Gareja where 6,000 Georgian monks were hurled to their deaths below by the invading Persians, who have repeatedly invaded the lower Caucuses through the centuries. My point is not just that Iran has been a major player in the region, historically, but that they have been THE player. And, they will continue to be. As these examples prove, their influence has often been far from benign. That said, they are simply not an existential threat to us, though sadly the belief that they are is generally, and unthinkingly, accepted as true. And if they are troublesome to their own neighborhood, then that should be something for their neighborhood to resolve. This flies in the face of 65 years of American foreign policy, but so be it.

Interesting that a homosexual like Graham should want to send other people's children to die in a war against a country that has neither attacked nor threatened us. Maybe it's because Iran outlaws things like homosexuality and abortion.

A couple years ago Michael Savage (the conservative talk radio guy) was discussing Iran and his guest expert was, of course, prophecy-evangelist John Hagee. Hagee said 70% of Iran was dissatisfied with their government and therefore the U.S. should invade Iran and liberate that 70%.

Hagee may not b the biggest jackass in the country, but he's certainly near the top of the list.

Justin and Milton,
I have always viewed Hagee as something of a cartoon character--straight out of Hollywood central casting. If Hagee had gone into acting rather than preachering, I could see him playing Boss Hogg on the "Dukes of Hazzard." For that matter, I can also see Sorrell Booke preaching at Hagee's Cornerstone Church.

"entrenched, self-perpetuating Establishment Party that is both Democratic and Republican."

It's also a world-wide cabal, an exclusive club. So no, there aren't going to be any substantive differences in foreign policy, either. Talk, yes. Heated debates, yes.


But it's all theater.

Look at Obama and how he gave the impression his foreign policy would be different. Well, it isn't. It's exactly what Bush, before he left office, was talking about doing. It's also exactly as McCain would have done, or John Kerry, for that matter.

Anastasia Theodora,
I agree--certainly on domestic policy, and generally on foreign policy. There has been no change in course between Bush and Obama. The one difference these days is that foreign policy wingnuts are now in the mainstream of the GOP, witness Lindsay Graham and the opposition to START Treaty, etc. The only difference between the two parties is that maybe the worst excesses of a totally misguided foreign policy can perhaps be avoided under the Dems. But I'm not holding my breath. I have just finished reading Andrew Bacevich's "Washington Rules." I highly recommend it.