No Relief in Sight 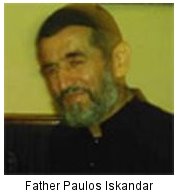 And today's paper is just chock-full of news from the abyss, such "Shiite town erupts in revenge killings after bodies found." Shiite villagers attacked a neighboring Sunni village, killing at least 26, this in retaliation for the beheading of 14 local Shiite construction workers the day before. And this story: "Iraqis' faith in premier fading fast." The story notes that to date, some 400 committees have been formed to investigate the myriad problems facing Iraq. So far, only 1 has brought its findings to Parliament. Meanwhile, since the government's formation, daily killings in Baghdad have risen from 65 to 100. At least one bureau of the new government is doing a landmark business--the passport office. Passports are being issued at the rate of 15,000 a week. Anyone who can afford to get out is getting out while they can.

These stories just set the stage for the cringe-inducing interview with Samir Sumaidaie, the Iraqi Ambassador to the U.S. He states:

...I want to make the distinction between what's going on in Iraq and all-out civil war. What's going on in Iraq is a campaign of violence waged by extremists on both sides, extremist Sunnis and extremist Shiites. There is no widespread conflict between the communities. The communities live quietly, peacefully and agreeably with each other, and have done so for thousands of years.

Alas, I doubt that any of Iraq's neighbors want a stable and unified Iraq right now and no doubt many are stirring the pot to keep her weak.

The Kurds are probably thrilled about the idea of a Federal system of states, but this seems to me an invitation for the Turks and the Iranians to create chaos there. Also, the Muslim Kurds are no more lovers of the Christian communities in their midst than the Turks I think, but you know more of this than I.

Hilarius,
I agree, particularly in regards to Iran. Iraq's increasing instability, though, is causing major headaches for Syria and Turkey.

The Kurdish question has the potential to unleash even greater instability in the region. They are already independent in everything but name. But, as you note, a fully-fledged, acknowledged independent Kurdistan will trigger reactions in both Iran and Turkey, each with substantial Kurdish minorities. My sense of the situation, after spending some time in SE Turkey, is that the Turkish government and military will simply not stand for it, even if the voters would let them.

We tend to see the Kurds as the "good guys" on the Iraqi side of the border. That is not the case at all across into Turkey. And particularly not so, when it comes to the treatment of Christians. For the persecution of their native Christian population whenever possible is one thing that Sunni, Shiite and Kurd can all agree upon.