I visited a few art museums on my recent road trip across the Deep South.  I have always appreciated beauty, but as the shadows lengthen, so to speak, I have become much more aware of it than before, whether in nature, architecture or art.  I do not like just any type of painting, however. I start losing interest at Impressionism, then quickly cool to Cubism, Modernism, Surrealism (excluding Bosch), and any sort of abstract art, which I do not even consider to be art. If abstract art is supposed to speak to us, then I do not like what I am hearing.

My first stop was the Brooks Museum in Memphis,  founded by wealthy patrons of the arts in that city.  The building is grand enough, anchoring the entrance to Overton Park.  I was not particularly impressed with their collection, finding more noteworthy works in much smaller cities.  The Brooks does have, however, the most extensive collection of Carroll Cloar, an important 20th-century Southern artist.  This was the main reason I sought out the museum.  They were nice enough, but my favorite, unsurprisingly, turned out to be Figures in Hell, by the followers of Hieronymous Bosch (ca. 1500). 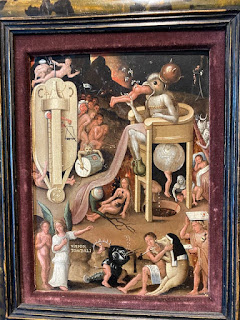 In Oxford, MS, I had hoped to visit the museum at Ole Miss.  That institution contains most of the paintings of Theora Hamblett.  The museum has not yet reopened, however.  “Miss Theora,” in Southern parlance, was a sort of Deep South Grandma Moses.  She ran a boarding house near the campus and took up painting late in life.  Her primitivist works most often depicted children, trees and household scenes.  More and more, however, her work began to reflect her spiritual visions, as she believed she received angelic messages directly. 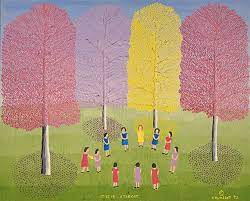 Oddly enough, she was “discovered” at the same time and place as Andy Warhol, and her work soon became collectible to the cognoscenti, exhibited in New York, Paris and elsewhere.  Miss Theora’s style is not exactly my sort of thing, but I found them intriguing, nonetheless.  I had another reason for searching her out, for it turns out Theora was a distant relative.  Her grandmother was the sister of my great-great-great-great-grandmother, which makes us, well, hardly kin at all.  I correspond with a couple of cousins who knew her.  But no matter, I enjoyed going down this rabbit hole.

While in the area, I searched out her grave, in the isolated Hamblett Cemetery.  This is William Faulkner’s Yoknapatawpha territory.  The unkempt cemetery, atop a forlorn and scraggly knob and surrounded by  a commercial pine forest, fits the stereotypical image of Faulkner’s creation.  Her grave is nice enough, obviously erected by her devotees.  Her father, a first cousin to my great-great-great-grandmother, was seventy-one year old at her birth.  She lies buried next to him. 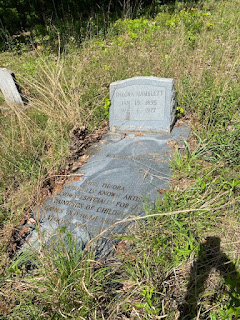 While I was staying in eastern Georgia, I visited the Morris Museum of Southern Art in Augusta.  In my estimation, this is one of the hidden gems of the South--so many great pieces.  A few that were memorable:  Atonement by Luke Allsbrook, Dog Thief by William J. Petrie, Surprise Attack near Harper’s Ferry by John Mooney, The Price of Blood by Thomas Noble Satterwhite, and Georgia Crackers by Pamela Vinton Ravenal.

I found Satterwhite’s work to be deeply compelling.  Despite the fact that he was a committed abolitionist from Kentucky, he actually fought for the Confederacy.  In his post-war career, his paintings tended to reflect his views toward slavery.  The Price of Blood is one such work.  The painting depicts a wealthy Southern planter, relaxing beside a library table, behind which stands a man of business, a slave trader.  The gold coins of the transaction lie neatly piled upon one end of the table, with the brandy decanter and glasses anchoring the other.  On the left stands a barefoot young mulatto man staring away from the other two men.  He is the son of the man who has just sold him.  I plan to incorporate this painting into my teaching from here on out. 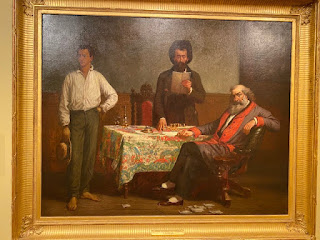 The artist that really grabbed my attention was William Joseph “Billy Joe” Petrie (1951-1994).  I stopped in the gift shop to pick up a few postcard prints of some of the paintings.  I collect them and then paste one into my journal, every twenty pages or so.  The museum had a sale table of old art catalogs from earlier exhibitions, selling for a dollar each.  I picked up a few, including one of the 2005 showing of Petrie’s work.  That night, back in my cabin, I read it from cover to cover.  I was hooked.  His paintings were often of a comical nature, my favorite being Losing My Religion.  A young man is exiting a little Baptist-looking country church, a gobsmacked look on his face, with his fingers clutching at his collar as if he couldn’t breathe.  In the doorway, the smiling pastor is greeting congregants as they leave, including, it seems, the Devil himself.

The catalog contained a link to a documentary (In Dreams Awake).  I learned that  Petrie grew up on a Kentucky tobacco farm.  He went away to college for a while, but came right back to the farm and family he loved.  Petrie single-handedly restored a ramshackle storage shed into his home and studio.  And except for a couple of years in Greece, and various other travels, this is where he would stay the rest of his life.  He worked in the fields all day, but once the workday was over, he would paint.  Friends he made elsewhere flocked to Kentucky, just to be near him.  And being near him meant working in the fields during the day, so the farm never suffered from a labor shortage. 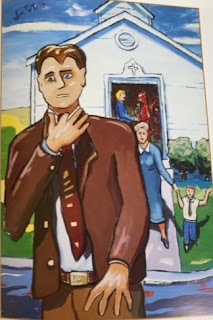 Petrie died tragically after falling off a twenty foot ladder.  He was taken to the local hospital where the doctor pulled a bottle of medicine out of an open box and administered it to Petrie for the pain.  This turned out to be a completely different medication, triggering a diabetic coma from which he died two days later.

During our nation’s bicentennial, the local Women's Club commissioned Petrie to paint a mural within the courthouse that would depict the sweep of Grant County history.  Petrie’s homosexuality was not a great secret. Because of this, a local fundamentalist preacher years later would punch a hole in the mural, claiming the loinclothed Indian depicted therein was homoerotic.

On my way back home, I stopped over in Laurel Mississippi, best known today for Ben and Erin Napier and their Home Town on HGTV.  Let me just say that Ben and Erin are in no danger of running out of homes to restore in the town.  While there, I visited the Lauren Rogers Museum. 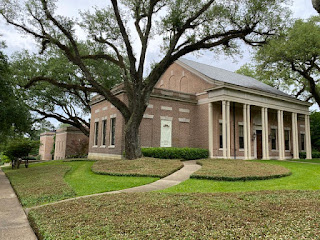 Laurel has never been the stereotypical Southern town.  It was never really plantation country and Jones County (which may or may not have seceded from Confederate Mississippi) was an island of Unionism in a sea of radical Secessionism.  Beginning in the 1890s, Laurel boomed as the center for the exportation of yellow pine lumber, making it, for the first time, a center of great wealth.  Laurel’s  Silk Stocking Row is about three blocks wide and twelve blocks long, and will compare with any wealthy enclave anywhere.  Lauren Rogers (1900-1923) was an only child and heir to two immense timber fortunes.  He graduated from Princeton, returned home and married in 1921.  He was considered to be intellectually gifted and had a great appreciation for art.  He and his wife started building their home just north of downtown, but he died suddenly of appendicitis.  His grief stricken parents pulled the house back down to the foundation, and then rebuilt it as the Lauren Rogers Museum.  They and other wealthy Laurel families established a Foundation, to which they poured money and paintings.  The institution also contains his 10,000 book library.  They have never charged an entrance fee.  I was greatly impressed with this art museum--absolutely remarkable for a town such as Laurel.
Posted by Terry (John) at 9:42 PM