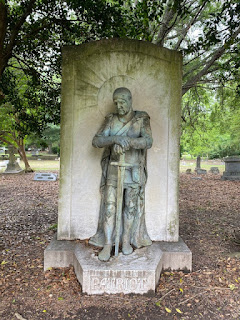 I turned off Interstate 20 at West Monroe, Louisiana, intending to check out the state's only meadery. only to discover that the establishment had burned about two months earlier.  No matter, for I was able to see this town's quirky old downtown district, which warrants a closer look some other time.  I have been crossing north Louisiana for over forty years, and I never imagined there would be anything worth exiting past Shreveport until, of course, you get to the Daquiri Drive-Inn at Delta.

From there, I angled northeasterly across the southeastern corner of Arkansas where I crossed the Mississippi River at Greenville.  A wealthy cotton port on the river for most of its history, Greenville is one of those places you go if you are looking for vestiges of the Old South as popularly imagined.  I was seeking, however, the City Cemetery, in order to visit the grave of William Alexander Percy.

William Alexander Percy (1885-1942) was a Southern writer, poet, man of letters, and aesthete.  He is most noted, however, as the mentor of the young kinsman he raised, Walker Percy, who went on to become a famous writer in his own right, and one of my favorites.  I read the senior Percy's Lanterns on the Levee many years ago, and have only recently discovered his poetry.

The immense forested cemetery is a bit of a mess--low-lying with standing water (though the Percy plot is on a raised bed), monuments jumbled in every direction, with the vegetation just waiting to take over at the first sign of neglect.  In short, it is not as impressive as you would think for a wealthy, prideful place as Greenville.  The adjacent Jewish cemetery, itself larger than many city cemeteries for a town this size, by contrast is orderly, high and dry, and meticulously maintained.

The Percy plot is the main attraction due to this larger than life-size statue of a somber, pensive knight, leaning on his sword (no doubt harkening back to the noble medieval English Percys, which this family very much does.)  The statue was erected in 1930 for William Alexander Percy's father, LeRoy Percy, a successful planter, attorney, and for a short time, U. S. Senator from Mississippi.  The Percys were a notable, but altogether tragic family (see Betram Wyatt-Brown's The House of Percy:  Honor, Melancholy, and Imagination in a Southern Family.)  On the reverse of the monument is the poem by Matthew Arnold which ends with the lines:

Charge once more then and be dumb,

Let the victors when they come,

When the forts of folly fall,

find thy body by the wall."

My family rolls their collective eyes about my fanciful plans for our family plot, but at least they do not have to worry about something like this.  To reference an inside family joke, I would have to sell the farm.  I am not at all sure that the Percys didn't have to do so as well.

The good die when they should live, the evil live when they should die; heroes perish and cowards escape; noble efforts do not succeed because they are noble, and wickedness is consumed in its own nature. Looking at truth is not at first a heartening experience--it becomes so, if at all, only with time, with infinite patience, and with the luck of a little personal happiness.

Not authors I'm familiar with, but an interesting read nonetheless.