Sunday of All Saints 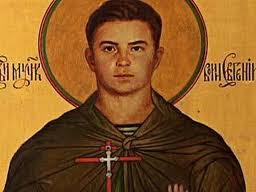 Today is the Sunday of All Saints in the Orthodox Church, and the homily for today is taken from the above passage.  The confession our Lord references is much more than the weak tea modernity has made of it.  The context of the passage is nothing short of martyrdom, if need be.    One sure mark of the Church is that you can be killed for belonging to it.  History ebbs and flows, and persecutions flare-up and die down, but one thing is certain--the Church of our Lord was, is and will always be the Church of the Martyrs.  And on this day, the story and memory of young Evgeny Rodionov was never far from my thoughts.
For a timely post on Evgeny Rodionov, check out Martyrium by Mark Hackard.  He links the young Russian's story with that of Tsar Lazar of Serbia, some 600 years earlier.  Hackard is an excellent writer, and I encourage the reading of his other articles, as well.
I find Rodionov's story compelling, and I have a tiny icon of Evgeny on my shelf at work.  He was no aesthetic.  He did not leave any collections of spiritual wisdom and insight.  Evgeny was no one's elder.  In fact, he was at best just a young man--what we would call a "kid."  But Evgeny was called to confess Christ in the manner of Matthew 10:32, and in so doing, he is remembered today and always.
Evgeny was not raised in a particularly religious home.  His parents saw that he was baptized, more out of superstition than anything else.  But there was something different about him, even as a child.  At age 10, he put on his baptismal cross and it never came off his neck again--until such time as his neck was severed from his head.  His mother tried to convince him not to wear it outside, but he told her not to talk like that.  At one point in his school career, he became skilled at boxing, but quit this as he did not want to hit anyone in the face.  At age 18, if not before, Evgeny was conscripted into the Russian army and eventually deployed to the Chechen conflict.
The action of the Russian government in regard to Evgeny's fate, and other young soldiers like him, is both despicable and without excuse.  Treated as less than cannon-fodder, he and 3 other young soldiers were placed in a remote checkpoint, then abandoned, without weapons.  In short order, they were captured by Chechen guerrillas.  The 4 young men were held and tortured for 100 days.  According to the later confession of his executioner,  they offered Evgeny his life if he would take off his cross and embrace Islam.  He steadfastly refused.  On his 19th birthday, Evgeny Rodionov was gruesomely butchered and beheaded.
To my knowledge, he has not been canonized (which is a whole different process than in Catholicism), and may never be.  His veneration is widespread in Russia (and elsewhere,) however, particularly among the military, who feel equally abandoned by their government.  To the non-Orthodox, this must all seem odd and cultish.  Perhaps.  But it is what we do.

Memory Eternal to all Martyrs.
Posted by Terry (John) at 7:22 PM

Thank you for posting that.

I'm with s-p. I had not heard of Evgeny.

Thank you from me too; I seem to recall reading of the circumstances of Evgeny's death, but perhaps I am confusing another account. May his memory, and all martyrs' memories, be eternal.