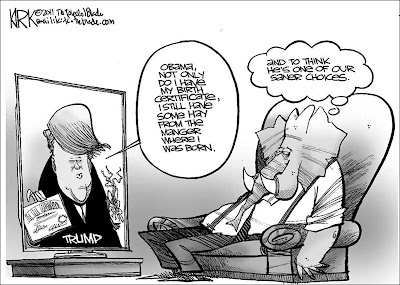 With a little over a year and a half before the next Presidential election, I thought I would have a little fun with the current crop of aspirants. Of course this time around, all the buzz will be on the right, which will be righter right than it has been in quite some time. And while no one has yet announced, the race is clearly underway. The lead pack--Newt, Haley, Sarah, Mike, the Donald, Michelle, Rick and Herman-- has already swarmed Iowa, where they are all busy burnishing-up their birther creds.

Newt keeps the hypocrisy meter spinning, and can say with Groucho Marx: "Those are my principles, and if you don't like them...well, I have others."

Haley is a GOP candidate right out of Democratic Central Casting.

Were Mike to be elected, the inauguration would have to be in Jerusalem.

And the Donald...well, as a born-again birther, he has been making the rounds, giving his testimony. I watched a clip of a recent interview he had with Bill O'Reilly. The Donald scoffed at the idea that the family would place a notice announcing little Barack's birth in the Honolulu newspaper, noting that "even the Rockefellers don't do that." Well, Donald, maybe the Rockefellers do not, and maybe your other neighbors on the Upper West Side do not, but in real world America, this practice was commonplace for many decades. The announcements were a public service, and the general practice was for the hospital to release the information to the local paper if so desired. The Donald doesn't mind being the butt of jokes when he is in on the joke, but here he appears clueless. But with 51% of GOP primary voters believing this fantasy, this may be a wise move for Iowa, where the percentage is no doubt much higher.

With these guys in the running, it has had the unintended consequence of making Michelle seem a bit saner.

None of these Dancing Demagogues could remotely win the GOP nomination, unless the Tea Party crowd totally subsumes the Establishment Republicans. What they are doing, however, is using up all the oxygen in the room and preventing any traction for the Sane and Sensible Centrists. For the life of me, I had trouble coming up with any candidates for this category--John H., I suppose; Mitch, who is probably not running anyway, and Ron P. when he is talking foreign policy.

The final category is the Establishment Electables, consisting of only Tim and Mitt. Tim would like to play with the Dancing Demagogues, but cannot yet bring himself to go the birther route. He is certainly trying to compensate, however, with his wild-eyed foreign policy proposals. But at the end of the day, he is even more boring than mild-mannered Mitt. And besides, it is Mitt's turn, a cherished GOP tradition.

So there you have it--it'll be Mitt vs. Barack. Oh yeah, and the VP nominee will be Marco Rubio, protestations to the contrary.

I am not one of these people who can take the high road and disregard it all for the foolishness it is. I am hard-wired for voting, and will do so as long as I am able. I do not think I will live long enough, however, for the GOP to ever convince me to vote their way again. But, if they were to do so, they would first have to nominate a candidate that did not insult my intelligence. So, that particular moral conundrum is at least 5 years out.
Posted by Terry (John) at 8:16 AM

I share your frustration and your hard-wiring to vote.

That sentence replaced the beginnings of a full-length rant against the GOP. But that could broaden exceeding broad, because we get the government we deserve. We fall for all the polarizing tricks until we get a choice like wet-behind-the-jug-ears Obama versus tired-and-crabby-and-overtly-warlike John McCain.

Where we part company is that I haven't voted for a Dem or Third Party Presidential candidate since 1972. I even was enthusiastic sometimes, until Dubya's Second Inaugural broke the enchantment. Now I fulminate, look at third parties and then, so far, end up holding my nose and voting GOP.

John,
I know what you mean. I have been all over the map, politically. I started off with Carter in 76. By 80, I was so disgusted with him, that I voted 3rd party--as I had not yet come around to Reagan. In 84, I voted for Reagan, more out of distate for Mondale (Carter II.) By this time, I was looking for a party that was not a slave to ideology--one that was interested in practical solutions. At that time, it was the GOP, or so I thought. In 88, I went for GHWB. Again by 92, so disgusted I voted for Clinton. By 96, I came close to not voting, but reluctantly voted for Dole. Hope springs eternal, as they say, and in 00 I was actually optimistic about GWB--until he picked Dick Cheney. I still voted for him, as I considered Gore-Lieberman much worse. Ditto for Kerry-Edwards in 04. But by that time, I had totally soured on the GOP, even though I voted for W. Four more years of that pretty much solidified me in my opposition.

I am something of a late bloomer, I guess, and the political/social/economic/cultural/religious views which I now hold only came into focus in the early years of this century. And I believe they will define my philosophy from here on out.

When I became Orthodox in 2005, I of course gave a life confession. My good friend (an Episcopalian), quizzed me as to what this entailed. In mock seriousness, I told him it was quite hard, especially my admission that I had voted for W not once, but twice! I went on to say that I would be doing penance for it the rest of my life. It has become one of his favorite anecdotes, and he never tires of telling it around town.

Crazy Louie is at it again.

I stopped voting. I just can't support the lie. My vote doesn't matter; they don't even give me decent people to vote for, nor do they obey the terms of the contract under which they claim legitimacy.

It's time to chunk the whole thing a start over. Despite all the demonizing modern historians do of monarchy, kings never even daydreamed of government this big, invasive, and stupid. I suspect this is because monarchs, regarding the assets of the realm as their own, would punish free spending bureaucrats for their evil ways.

Of course, while you fellows are entering your silly season, we are in full swing up here, and have been since last week Friday when the government "fell". But ours will be over within a month, so not so bad. Except, we can generally expect more of the same - a Harper minority etc etc. Except, of course, if you believe some opinion polls, a very slight majority for the Conservatives.

But I don't know how you guys do it - the intermable politics, the 18 month electioneering etc etc. We have aprovincial election later this year, but that is realtively low key as well.

And Mitt will win and we'll congratulate oursevles for having elected our first Mormon. After that we'll have our first woman president, then our first Jew, Hispanic, Gay, Asian, Pacific Islander, etc, until a WASP gets a turn at it again.

I always vote third party, since 1988 when I was perhaps the only person in the country to split my ticket between the Right to Life Party and the Workers' World Party (I met the latter's candidate at an anti-Klan rally, and voted for him because he was accesible).

Kirk, I really, really, did NOT need to see that.

August, I'm with you. Monarchies have gotten a bad rap.

Singular, what do you guys do the rest of the year without perpetual campaigning?

Western Confucian, I've only voted 3rd party once in national elections--still delusional that my vote is "making a difference." Yeah, right.

John - we eat popcorn and peanuts watch the circus down south!

Note to Reader John: Speak for yourself, Miles Standish. I for one do not get the government I deserve.

Note to all: I have found "The Donald" to be a uniquely loathsome individual since he slithered onto the national scene some thirty years ago. If it can be said truthfully (and I think it can) that Faulkner and Cather and a few others represent the best that our culture has produced, then Donal Trump is the worst, the absolute nadir--a man who has elevated the Chamber of Commerce mentality to the point that it has taken on a sort of sleazy grandeur.

Do not count Obama out in the next election. It would be very unwise to do so.