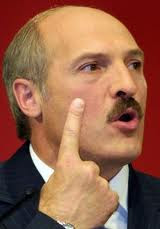 One doesn't hear much about Belarus these days. What is reported is usually some variant along the theme that President Alexander Lukashenko is nasty autocrat, indeed dubbed "Europe's last dictator," who perversely and resolutely refuses to follow the script we have prepared for the post-Soviet republics. The current controversy centers around the recent election which saw a turnout reported in excess of 90%, with Lukashenko receiving 79% of the vote. Protesters tried to storm the Parliament. The police responded in force and hundreds were arrested. Eurocrats--excluded from monitoring the process-dismissed it as "flawed." The fact is that Lukashenko does not pretty-up well. And he does not care.
For a differing perspective, Srdka Trifkovic writes here; some excerpts as follows:
But Lukashenko, whose government was called the “last dictatorship in Europe” by the U.S. government, claimed that the election was free and fair and vowed to maintain order. By now he knows what he is against. He has said in the past, “In our country, there will be no pink or orange, or even banana revolution.” More recently he said some people in the West think that Belarus is ready for a color-coded revolution, but they are not getting any; “all these coloured revolutions are pure and simple banditry.”

A Western-financed student group, Zubr, already tried in March 2005 to emulate the color-coded revolutions, but the effort collapsed after fewer than a thousand people joined it....This time round Brussels and Washington may huff and puff, but there will be no color-coded revolution in Minsk. The political facts of the case are straightforward:

1. Lukashenko is not a Western-style democrat, but he is not a dictator either....no Western diplomat in Minsk disputes the fact that he’d be a winner even in an election conducted on Swedish or Swiss rules.

2. Lukashenko’s key early move was the closing of the Belarus Soros Foundation in 1997, followed by a ban on other “NGO”-clones. This prevented the replay of Belgrade, Tbilisi and Kiev in Minsk— and turned him into a “dictator” in Washington.

3. Lukashenko’s popularity...is due to the fact that he has resisted foreign attempts to subvert him (or else to buy him) and to open the country to “privatization” and “post-communist transition” with predictable results for millions of common folks.

To understand this last point, it is necessary to list some of the economic fruits of Lukashenko’s 16 years of power:

1. A modest budget deficit of 3 percent of GDP...being less than one-third of the U.S. equivalent.

2. The unemployment rate in Belarus is currently just under 1% (one percent), one-half of what it was in 2005; while the GDP at $12,500 per capita in 2009 is on par with EU members Romania and Bulgaria and almost twice that of then-Orange Ukraine.

3. The economy of Belarus has weathered the global crisis spectacularly well...GDP will grow by a China-like 7.2 percent this year and 6.2 percent in 2011.

4. Institutional investor confidence: Overall out performance helped Minsk raise $1 billion in its maiden five-year Euro bond last summer. Belarus plans to borrow $2.2 billion in 2011, with $1 billion through bond issuance—but it wisely has no plans to accept billions of euros in EU “aid.”
5. Private investor confidence: According to a City of London investor after a recent visit to Minsk, “We made an investment. Now, if anything, we are getting more bullish. Belarus has more potential.” No, Lukashenko needs no poisoned gifts from Brussels.

An important factor...is the low crime rate...of 1250 per 100,000 inhabitants...below Japan’s 1,500 and one-eighth of 9,622.10 for the United States...There are no “undocumented workers” in Belarus, no Third World immigrants, no “asylum-seekers,” no Albanians, very few Muslims (several thousand Crimean Tatars), and no protected minorities for the Sorosites to obsess over.

Belarus is a stable country, far luckier on all key counts than many of its post-communist peers with impeccable “democratic” credentials. The people are educated, hospitable, and warm-hearted. The gays in the military are not an issue, and there is no NPR. The streets are safe, the churches are full, the prices ridiculously low by western standards. Were it not for the climate (harsh continental), the cuisine (hearty yet bland), and the landscape (flat and rather boring), Belarus would be well worth considering as a place to flee to when the financial and economic decline produce a nation-wide, Hobbesian Katrinaland over here.
Posted by Terry (John) at 2:50 PM

I suppose that whatever works, works. What we have here at the moment doesn't seem to be working too well. I think you hit on the meat of the matter with this statement: "'Europe's last dictator,' who perversely and resolutely refuses to follow the script we have prepared for the post-Soviet republics."