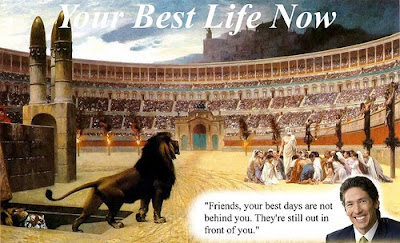 Hanna Rosin looks for connections between the recent housing crisis and the "prosperity gospel" in Did Christianity Cause the Crash? The short answer to her question is, of course, "No, Christianity didn't."
Approximately 50 of America's 260 largest churches are prosperity-gospel churches. And 66% of all Pentecostals and 43% of "other Christians" believe that "wealth will be granted to the faithful." Clearly, these American believers were, and remain, a receptive market to what the bankers were selling. Rosin looks in particular at Pastor Fernando Garay and his Casa del Padre, a largely Latino prosperity-gospel church in Charlottesville, Virginia. This group is representative of the larger phenomenon, "the shift in the American conception of divine providence and its relationship to wealth."

Obviously, there is enough blame to go around in the housing bubble, and Osteenites were hardly the only recipients of sub-prime loans. Her story, nevertheless, is an eye-opener, with greed and covetousness at both ends of the process. The most surprising aspect was the collusion between lender and pastor. She tells of mortgage brokers and bankers sending speakers to church-sponsored “wealth-building seminars.” There, pastors would be promised a $350 donation for every new congregant mortgage. Of course, in the case of Casa del Padre, the lines were blurred even more. Pastor Garay was a mortgage broker from 2001 to 2007, and served as financial advisor to many of his parishioners.

It can be hard to get used to how much Garay talks about money in church, one loyal parishioner, Billy Gonzales, told me one recent Sunday on the steps out front. Back in Mexico, Gonzales’s pastor talked only about “Jesus and heaven and being good.” But Garay talks about jobs and houses and making good money, which eventually came to make sense to Gonzales: money is “really important,” and besides, “we love the money in Jesus Christ’s name! Jesus loved money too!”

Ah yes, the American way. And who said our immigrant populations would not assimilate?

Rosin ends with a passage from Jackson Lears' Something for Nothing, in which he describes two wildly divergent "manifestations of the American dream." On the one hand, there is this:

The traditional Protestant hero is a self-made man. He is disciplined and hardworking, and believes that his “success comes through careful cultivation of (implicitly Protestant) virtues in cooperation with a Providential plan”....[who] images a coherent universe where earthly rewards match merits.

The alternative, and thoroughly modern version is this:

The hero of the second American narrative is a kind of gambling man—a “speculative confidence man,”...who prefers “risky ventures in real estate,” and a more “fluid, mobile democracy.” The confidence man lives in a culture of chance, with “grace as a kind of spiritual luck, a free gift from God.”

What is important for us to remember is that both of these narratives are, in fact, myths of our own making.
Posted by Terry (John) at 9:19 AM

That man's smile gives me the heebie-jeebies. Please post something else soon, otherwise I'll have to squint every time I visit here...

I'll get right to work on it.

I cannot watch Joel Osteen speak for more than 3 seconds without having to turn away. Every gut, instinctual cell in my body, let alone my soul, screams out to me "this person is a PHONY." It's so disheartening to see how many folks buy into (no pun intended) the prosperity drivel.

He's not a phony in the same sense that Elmer Gantry wasn't a phony: he doesn't actually DISBELIEVE his blatherings; he just doesn't really believe them. There is a difference there. By the way---if you haven't read "Elmer Gantry," I heartily recommend it. When you put it down you will never again view these stump-jumping evangelists in quite the same way.

And this is why most people who are involved in multi level marketing schemes are fundamentalist Christians. sigh.