Vlad to the Rescue 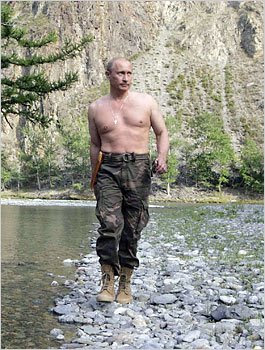 I believe that much of the overblown rhetoric about Iran is just that. For all the bellicosity from the Bush administration, I don't believe that we even have the capacity to expand the war into Iran. That said, incidents such as this week's cringe-inducing press conference remain troubling. But it seems that Vladimir Putin may have just saved George Bush (and us) from himself, as Srdka Trifkovic reports here.

Trifkovic posits that "Mr. Putin is effectively helping President George W. Bush avoid an adventure that would bring ruin to all involved, save the promoters of an Islamic end-times scenario." He is referring, of course, to the recent Caspian Summit in Tehran.

The Declaration at the summit, signed by Russia, Azerbaijan, Iran, Turkmenistan and Kazakhstan, effectively preempts any threat to the existing balance of power, by any non-Caspian state. As he notes, there will be no "Operation Iranian Freedom" for the remainder of the Bush presidency. Trifkovic concludes:

If there is one thing to be thankful to Mr. Bush, it is for his unwitting contribution to the emergence of a multipolar world. External restraint, unimaginable a decade ago, is being imposed on America. It is dictated by the perfectly normal desire of Russians, Chinese, Indians and many smaller nations, to prove—contrary to Mr. Bush’s repeated assurances— that “History” has not called America to anything.

It is to be hoped that the emerging new global balance of power will reflect internationally what the system of checks and balances does at home. Its re-establishment will render ludicrous the hubristic ravings of Benevolent Global Hegemonists. It will also help re-legitimize the notion of America as a nation among other nations and a state among other states, with definable and limited national interests as the foundation of its diplomacy. Contrary to what Mr. Bush and his dwindling band of apologists may claim, this is neither defeatism nor isolationism; it is sanity.

Why a resurgent Russia just now? It's not hard to figure out, and it's not just about the oil. Pat Buchanan sums it up here, better than most. His conclusion is damning and spot on:

At the Cold War's end, the United States was given one of the great opportunities of history: to embrace Russia, largest nation on earth, as partner, friend, ally. Our mutual interests meshed almost perfectly. There was no ideological, territorial, historic or economic quarrel between us, once communist ideology was interred.

We moved NATO onto Russia's front porch, ignored her valid interests and concerns, and, with our "indispensable-nation" arrogance, treated her as a defeated power, as France treated Weimar Germany after Versailles.

Who restarted the Cold War? Bush and the braying hegemonists he brought with him to power. Great empires and tiny minds go ill together.
Posted by Terry (John) at 7:30 AM

Spot on. Not only has Vlad stood up to Militant Islam in Chechnya, despite Western demands for capitulation, he is now and Orthodox Christian AND willing to stand down "W." [But of course, TIME magazine will give Man-of-the-Year to Gore or perhaps "All Women" or something as equally ludicrous.]

Thanks John. Sometimes, with the parochial coverage given by the most convenient news sources, it can get a bit confusing to understand Mr. Putin's approach on some things.

This post and the links you provided sure helped clarify things.

Interesting use of the term "hegemonists" and "empire" by Buchannan. I'm just now reading Niall Ferguson's "Collossus" about the Rise and Fall of American imperialism: basically, how America is and has been an empire in denial, which has led it to attempt imperial tasks but without the imperial will to choose tasks and see them through to the end. Ferguson actually argues for an American Empire as a bulwark against apolarity (as distinct from a multipolar world), but holds out little hope that the US will be able to act as a "liberal empire".

I've been saying for some time now, but nobody seems to hear it: Everybody keeps on harping about China as the next superpower - but we should not forget Russia. Here is the nation with nigh-endless resources, a skilled populace, and a strong cultural / religious identity. What else do you want?

When it comes to mineral resources, there are immeasureable tracts of land that has been inadequately explored.

Add on to that the can-do attitude of the Russians - their engineers seem to be able to make anything work with the most basic supplies and ridiculously small budgets. It might not be pretty, but it works.

The "link to this post" thingy on Blogger seems to have gone on the blink again. Nevertheless, I have linked, it just doesn't seem to be showing up on your side.

Comment to Skylding: China and Russia, are, of course, two of Huntington's civilizations.

Buchanan's article really struck a chord with me. Our Russia policy has baffled me for years. I find it to be rooted in equal parts naivete and arrogance. The US fails to appreciate that other countries have their own legitimate national interests, which may not at times coincide with ours. We assume our system of government to be self-evidently God-given, and not the product of a 1000 years of Anglo-Saxon history. We are incredulous when this native plant fails to take root and blossom immediately in foreign climes.

I do not want to be an apologist for the Russians, for they can be brutish and heavy-handed. I particularly resent their leaning on one of my favorite little corners of the world (the Republic of Georgia), but then again, that IS their neighborhood.

But regardless of your slant, it would seem to me that Russia should be a natural ally to the U.S. If you fear the ascendancy of the Chinese, then what country would be your natural ally? Russia, of course. If you buy into the Rumsfeldian view of an emasculated "Old Europe," then what country would be the dynamic counterpoint to that? Russia. If you fear the advance of militant Islam, then what country has the longest history of dealing with this phenomenon, as well as the longest border with Islamic countries, and consequently the greatest interest in working together against this idealogy? Russia again. From a Christian perspective, if you bemoan the increasingly secular nature of American--much less European--society, then what country exhibits a resurgent and muscular Christianity? Obviously, Russia. If we were to step back a bit, and take a cool, realistic look at the world, and think civilizationally, then we should conclude that our interests and Russia's are much the same.

But Americans will not do this. Part of it is the left-over Cold War mentality, where Russia was the ever-present "other." Their failure to immediately embrace and establish an American-style democracy after the fall of Communism just confirms the age-old suspicions. I suspect that much of it also stems from one of my bugaboos--the hold that Christian Zionists and Premillenialists have in this country. For in all their feverish speculations, end-timers agree on one thing: the identification of Gog and Magog with Russia. Once Communism fell, they had to work on the script a bit, but they still see Russia's hand in the Middle East as part of the prophetic fulfillment leading to the Apocalypse. I'm sure John Hagee is busily assembling his next book that will place Putin's conference in Tehran as part of the "Countdown to Armageddon." So, among the Christian evangelicals who hold to this junk theology, Russia--in whatever form--will always be the enemy. Sad, but true. I am familiar with Evangelicals in my area who still hold fund-raising campaigns to "Take Christ to Russia," seeing only the Communist legacy, and oblivious to 1200 years of Christian history--which they would probably discount anyway, it being Orthodox.

you said one thing there that I've been mulling over for a long time: The ascendeny of dispensational premillenial ideas, and the utter damaging influence it has had on the US and her foreign policy.

BTW, I've heard it stated that the country in the Middle East which grants Christians the most freedom is Syria!

Protestansts, of which I'm one, will do well to reread Wurmbrand. Then they might think twice about "taking Christ to Russia" as if Russia never had the gospel.

One can't blame everything that has gone wrong with our Middle East foreign policy on the Pre-Mil. Dispensationalists, but they do have a large part to play in the debacle. Their presuppositions are accepted as gospel by the casually religious of America, including the current occupant of the White House.

Absolutely! I get angry every time the Administration starts beating the war drums about Syria--the only place left in the Middle East where we have not ruined it for Christians. A police state, to be sure, but one where the minorities have safeguards--mainly because Assad himself is a member of a religious minority.

I keep meeting Orthodox Christians who originally went to Russia and other Second World countries as Protestant missionaries, to take Christ there, and found that Christ had beaten them to it. So some good must be coming out of that!