The Shame of the Cross 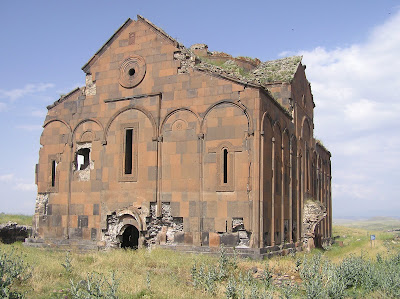 In the year 1064, Turkish tribes under the leadership of Alp Arslan, overran Ani, a Armenian city of over 100,000 inhabitants. Hundreds of churches dotted the metropolis, dominated by the great cathedral church. Alp Arslan ordered that the dome of the cathedral be scaled and the great silver cross pulled down. He had the cross embedded in the threshold of his mosque, so that "true believers" could trample upon the symbol of the Christian faith as they entered. The city never recovered from the carnage and butchery that followed it's fall. Today, Ani is a windswept ruin, though the gaunt shell of the enormous cathedral still stands.

A thousand years later, any battles over the cross are not so epic or spectacular--at least here in the West. There are no walls to scale, few defenders, and often as not, those inside the walls have already done the preparatory dirty work.

The following story should not be particularly alarming, mainly because it is so typical and the responses oh so predictable--all grist for the conservative talk show mill, I suppose. The story revolves around a simmering fuss at the College of William and Mary in Williamsburg, Virginia. W&M is our nation's second oldest university, dating from 1693. As one would imagine, the college is steeped in history. The gem of the campus is the Wren Chapel, dating from 1732. [I visited in 1998 and can attest to its beauty]. At issue is an 18" brass cross which has been on the altar there since 1940. It seems some students have taken offense. And with good reason--a cross! In a chapel, of all places! Imagine the horror of it all.

Gene K. Nichol, the school president, is sensitive to the tender sensibilities of the W&M student body. Indeed, he notes that since 2005, perhaps 20 people have mentioned to him their concerns about the brass cross. With such an overwhelming groundswell of opposition, what course could he take other than remove the cross? In October, he did that very thing "to make the chapel more welcoming to all faiths." He remarked that "it's the right thing to do to make sure this campus is open and welcoming to everyone...this is a diverse institution religiously, and we want it become even more diverse." But of course. And what better way than to remove the last remaining vestige, however faint, of the faith that both formed and has informed the university for most of his 313 years? Certainly, W&M is an elite institution that no longer caters to planters sons from along the Rappahannock. The international student body is indeed diverse, and I would doubt that a majority is even nominally Christian. But still, one can't help but be struck by the silliness of it all.

Some former students have rallied to protest the removal, and well-healed alumni have threatened to withhold funds. A spokesman for the group claims "it reflects a view that religious symbols --religion and the public expression thereof--are somehow an obstacle for us to get along with one another."

Nichol counters by asking "does that marvelous place belong to everyone, or is it principally for our Christian students...Do we actually value religious diversity, or have we determined, because of our history, to endorse a particular religious tradition to the exclusion of others."

I suppose the chapel could be converted to a cafeteria. Perhaps that would not be offensive. Of course, there could be no pork, and the other meat would have to be halal.

As one would expect, Nichol's decision was endorsed by the student assembly, most of the faculty and the Campus Ministers United. An Orthodox Jewish student from Israel complained that he was "uncomfortable" during Freshman orientation in the chapel. But now he feels "an integral part of the community due to this symbolic action." How lovely. And I'm sure Israeli colleges are equally accommodating to any non-Jewish students that come their way. Really.

Perhaps the opponents of the cross have inadvertently hit on something. In our country, the symbol has become little more than a piece of decorative art or a fashion accessory. When seen in this light, there could have been no ruckus at William and Mary. But maybe the Israeli student was right to feel "uncomfortable" in the same room as the cross. For the cross does not soothe and comfort. Rather, the cross, rightly seen, is unsettling. It is convicting. It pierces the soul and demands a declaration from us. And ultimately, it leads us to our redemption.

So, we'll see. Perhaps the alumni money will triumph over the diversity and dialogue crowd. But it will be a hollow victory. The problem here, it seems to me, is not those non-Christians who catch a sense of what the cross implies and oppose it. Rather, the true enemies are those useful idiots who, while giving lip service to Christianity, jettison the cross as a divisive and offensive symbol, to be sacrificed to the God of Diversity.
Posted by Terry (John) at 5:49 AM

Nice entry, John. I especially agree with your last two paragraphs. We should be most concerned when the Cross no longer offends.

because it makes visitors uncomfortable.

Interesting post - loved the picture from Turkey - and glad you are posting . . . I was beginning to think you'd taken ill or taken off again on another one of your journeys!

Hilarius, just give it time--I'm sure someone has already complained.

And no, I haven't been ill, exactly. The recent death of a close family member, however, has kept me off the blogs the last 3 weeks or so. Good to hear from you.

John- hmmm...many prayers for you and your family, and the departed.

Most excellent post, John. I love the picture and accompanying historical reference. I wonder how many Christians would really welcome the day the Cross REALLY becomes an offense? It seems the "religious right" is relying on legislation and "American tradition as they percieve it" to preserve the Cross/Judeao-Christian symbolism etc. in the public marketplace. But the reality is the marketplace is passing them by and legislation in a democracy is moving away from them because they have no significant impact on the culture any more. Evangelical/Protestant Christianity has not done for America what Orthodoxy did for Russia, Greece, Romania etc. etc. which was transform the culture. (Of course we can speculate why they had the problems they had after 8-900 years of being "Orthodox"...) But, I think this very scenario is a microcosm of how evangelicalism responds to its own impotence: roll over, threaten with money/power, or try to ecumenize. Its basically the Pharisees and Saducees all over again..