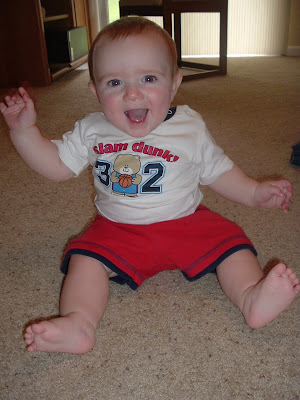 This is the hardest post I have ever tried to write, an attempt to articulate what I have experienced since the death of my little friend Jamie on March 3rd. I remember grieving over the loss of my parents, my in-laws, my brother, a favorite uncle and countless relatives and friends, but nothing prepared me for this. Jamie died in a freakish accident at only 14 months.

Let me tell you about Jamie. He, his parents, uncle and older brother are members of our parish. When people speak of a certain family as being the “backbone” of a congregation, they are talking about people like Jamie’s family. His dad is my son’s godfather, and I am Jamie’s uncle’s godfather. Jamie was simply the sweetest, most charming child I have ever known. He was always happy, with a ready smile for everybody. For some reason, he took to me (most children do not) and was content for me to hold him. But then, Jamie loved everybody. He liked to play with my beard and try and poke his finger in my mouth. Jamie particularly loved the icons in our church. I would walk him around to each one and he would point to them, one by one. He never tired of it.

Last week would have been my favorite week of the Orthodox liturgical year. We began with Forgiveness Vespers on Sunday, and this would be followed, of course, by the Great Compline and the Canon of St. Andrew of Crete every night for the rest of the week. I just love these services. For some reason, I didn’t hold Jamie at Monday night’s services. My son John did, however, and I recall smiling and making faces at Jamie from across the room, trying to get him to laugh at me. As we were leaving the churchyard that night, his dad asked me how I liked his new pajamas, and I off-handedly replied that Jamie would be cute even if he were wearing a paper sack, as I got into my car. I received word of his death about mid-morning the next day.

Somehow, we continued with our services through the week, even that Tuesday night. But in looking back, the question is not so much how we did that, but rather, how could we have made it without the services? The familiar chants, such as “Christ is with us,” or our hymn “Oh Lord of hosts be with us, for beside Thee we have no other helper in adversity, Oh Lord of hosts have mercy on us,” took on meaning we could have scarcely imagined before.

For a variety of reasons, the funeral could not begin until the following Sunday. Jamie’s parents were with us for Divine Liturgy that morning. Visitation was from 2-4, and from 6-8 that afternoon, with a Panikhida beginning at 7:30. The crush of people in the first session consisted primarily of non-Orthodox extended family and friends. I am sure many of them wondered about those of us, standing next to the casket, who took turns chanting from the Psalter, as they chattered away about who brought which flowers, in the way Protestants generally do funeral visitations. The last visitation session was decidedly more hushed and Orthodox in flavor, as friends and priests started arriving from Ft. Worth and Houston. This was my first Orthodox funeral. I am used to the beauty of our services, but nothing prepared me for the Panikhida.

With the saints give rest O Christ to the soul of Thy servant where there is neither sickness nor sorrow, and no more sighing, but life everlasting.

Thou along art immortal, Who hast created and fashioned man. For out of the earth were we mortals made, and unto the same earth shall we return again, as thou didst command when Thou didst fashion me, saying unto me: earth thou art, and unto the earth shalt thou return, wither we mortals all shall go, our funeral lamentation making the song: Alleluia, Alleluia, Alleluia!

The next morning, our priest and we pallbearers returned to the funeral home. We processed to the hearse, carrying Jamie’s casket, and then began the 30 minute journey to our church. When we pulled up into the churchyard, we were amazed to see the number of people assembled there. And yet, all of these mourners, largely non-Orthodox, managed to wedge themselves into our small sanctuary. There were easily 125 people in attendance.

The Orthodox do not twist themselves into knots over “why bad things happen to good people.” We do not deny pain and suffering, though we are human, and the swiftness and severity of it sometimes takes our breath away. The Orthodox funeral service reflects this reality. In the sermon, Fr. John reminded us that little Jamie, even at his young age, already knew Christ, he had already received Christ, in the same way that we all must do. The service at the church ended with the Last Kiss. The Orthodox, and those others who wish, process by the casket, venerating the cross, and kissing the deceased on the forehead. I was apprehensive about this, not due to any qualms I had, but rather recognizing my attachment to Jamie. But the Church is wise, and knows what it is doing by having this in the service. 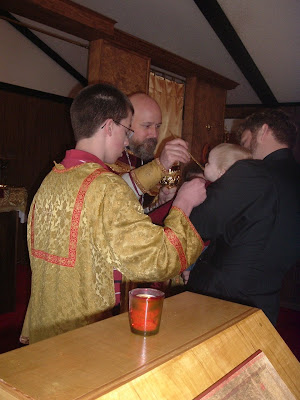 After the service ended, those of us who were going to the burial left from the church fairly quickly. Jamie was to be buried in the cemetery at Holy Archangels Monastery in the Texas Hill Country north of San Antonio, some 290 miles distant. But this is Texas, and we do that sort of thing here. Some in our church had prepared sack lunches for all making the drive, as we would not have time to stop and eat if we were going to reach the cemetery before sunset.

The topography of the Texas Hill Country differs markedly from our leafy East Texas environs. The land there is rocky and rugged, dotted with gnarly live oaks and cedars. Substitute olive trees for the live oaks, and it could pass for most any Mediterranean setting. The monastery itself never fails to impress, with its exquisite church, and near-completed monastic complex that could easily house 100 monks.

All was quiet save for the wind blowing and the sound of rock doves cooing in the distance. Slowly, the monks strode through the grove and assembled around the grave. The burial service itself was in Greek, and relatively brief. Unlike Protestant funerals where the family is shuffled away before the casket is lowered, we remained huddled around the grave as it slowly descended. Then, we each took took a shovelful of dirt from a wheelbarrow and poured it on the casket. Nothing is denied. Nothing is left undone. We had buried the body of little Jamie.

The monks invited us to a meal at the refectory, and then offered a tour of the church and grounds for those interested. We spent the night at a little tourist court at a neighboring town, and headed back on Tuesday morning. When we arrived home that afternoon, I think we were different people than when the journey began a week earlier. While we would never choose this method, the fact is that our young mission had “jelled” as a true parish. Certainly before we were people who loved God, loved each other, and loved to worship. That is true. But this had thrown us into each other’s lives in a way we could have not imagined. Those of us who accompanied this grieving family through this week know what I am talking about, even though they may find it hard to express in words, as I certainly do.

Andrea Elizabeth and David Bryan have each written with eloquence about Jamie on their blogs, here, here and here. I encourage you to read their observations.

May his memory be eternal and may he pray for us.

This was a beautifully written tribute. The death of a child is the worst loss---it is perverse---children are supposed to bury their parents instead of the other way around. As one who has been where Jamie's parents are now, can only say, "You will never get over this, but eventually you will get used to it and life will once more be tolerable."

Thank you for sharing not only your experiences, but their deeper significance as well.

May his memory be eternal!

And my prayers for all feeling the loss of a loved child and friend at this time.

May Jamie's memory be eternal. Thank you for your post, John.

May his memory be eternal, and his family and all those who love him receive strength and comfort from our God.

I've read Reader David and Andrea's posts as well, May his Memory be Eternal. I am so sad to hear